I was reading this (perhaps offbeat) "anti-big-bang" article,

and the author comments "a recent catalog of objects having very large redshifts shows that among 109 quasi-stellar objects for which both absorption and emission lines could be measured, the value of the absorption redshift of a given object is always different from the one measured in emission for the same object."

BTW I've just realised the article is perhaps from 1988 (it's somewhat confusingly also dated 2012) - so this may be completely out of date.

I had a quick look at the paper - it's mostly nonsense. The intrinsic light from a quasar is completely dominated by its emission line spectrum and a mostly featureless continuum. The observed wavelength of the emission lines compared to the rest wavelength give the true redshift of the quasar.

Absorption lines in quasar spectra are predominantly due to foreground gas clouds at lower redshifts than the more distant quasar source. Therefore the absorption lines do evidence a lower redshift, but that's because they are due to gas that is unassociated with the quasar.

Here's a picture from a Hamburg Sternwarte description of these absorption lines, that illustrates the situation. Absorption lines are formed due to absorption of the quasar continuum by gas clouds (or maybe even much fainter normal galaxies) A, B and C, which are at progressively lower redshifts (often multiple absorption systems can be found and can be used not only to place the distance of the intervening cloud/galaxy but also say something about its chemical composition). Spectrum D shows how the measured spectrum at the telescope will contain a highly redshifted quasar's light with superimposed absorption bands due to the lower redshift clouds. 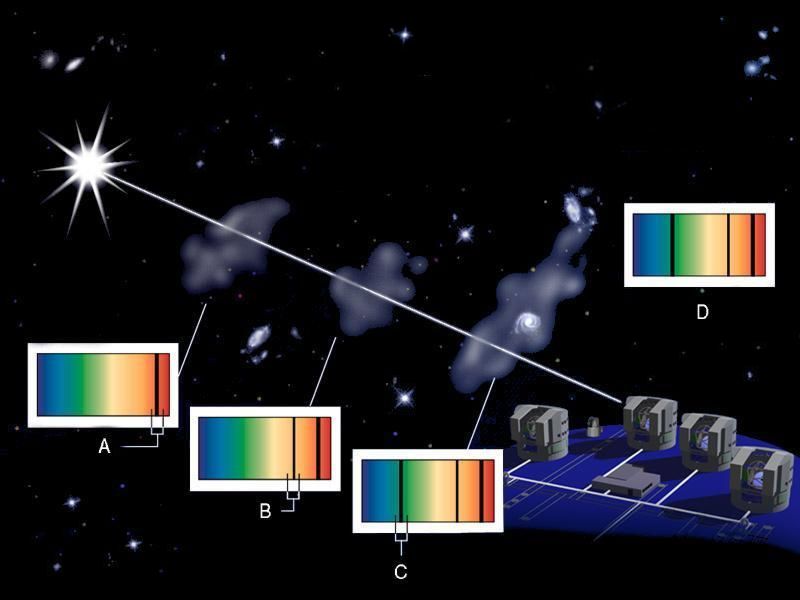 Not the answer you're looking for? Browse other questions tagged cosmology astrophysics gravitational-redshift or ask your own question.

1
A thought about Quasars
1
When gravity pulls on light it blueshifts or redshifts it, which way around does it go?
3
Proof of expression to combine different redshifts
2
CMB absorption by interstellar medium and contamination with galactic microwave photons
13
Do quasars exist today?
4
How do we know that Quasars actually produce collimated jets?
12
Why don't absorption and emission lines cancel out in our Sun?
0
Why are there fewer lines on the absorption spectrum than on the emission spectrum for some gases?