I would like to solve the problem on the following image: 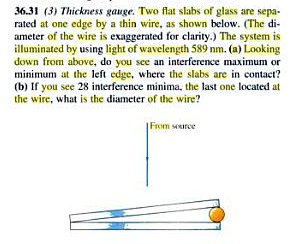 My question is: Why is the answer to (a) a minimum?

Now, We have three waves who are reflected towards our eye. 2 and 3 automatically cancel each other. There is only wave 1 left. So, this is not perfectly destructive. How can they call this a minimum?

For a start, and in context of question (a), you can simplify the situation by thinking it as two glass slabs parallel to each other with an air interface of neglictible thickness between them.

Now, first: All the light you want to consider is the light that goes into the slabs. In effect, each time light meets an interface, part of it is transmitted and part of it is reflected. So think about the part of the light that is first transmitted through the top interface of the top glass (which is the great majority of it). Then, when it goes to the bottom*, part of it is transmitted and the rest is reflected back into the slab. This happens an infinite number of times (every time with a decreased intensity) on both interfaces so that in the end, the the light that comes back out from the slabs to your eyes is the majority of the light. Therefore, you can neglect your first bullet point. (I recommend you to look up the maths in your textbook, it's only a sum of an arithmetic progression if my memory doesn't betray me).

Second: Magic happens at the interface of both of the slabs. Go back to the * in the previous paragraph. At that time, two reflexions occur: one from the bottom of the top slab (with no phase shift as it is a glass/air interface) and one from the top of the bottom slab (with a phase shift as it is an air/glass interface). As we consider the air thickness to be neglictible, we obtain two waves with a Pi phase shift that destructively interfere. All you have to do is prove that the intensities of both of these are comparable (with the aforementioned sums) so that you can detect a minimum. 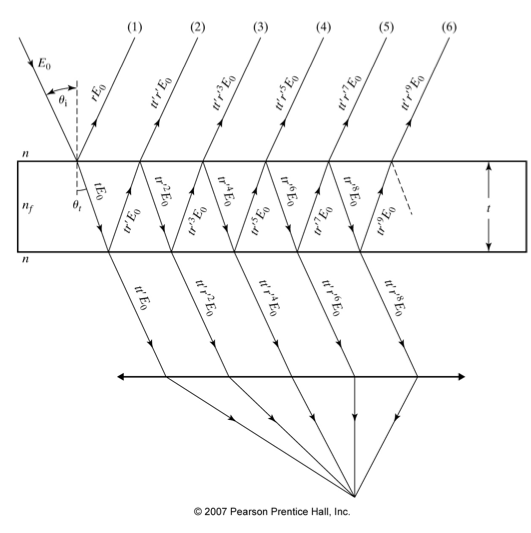 This image (taken from the book Introduction to Optics by Pedrotti) illustrates what I mention in the first paragraph of my explanation: after multiple reflections and transmissions, the intensities of the rays add up. With this, you can figure out the sum I mentionned by yourself.

The r and t respectively stand for the reflection and transmission coefficients. Be careful with the t though as it is also used for the thickness of the slab (on the right side of the picture).