Storing a Planet-sized Chunk of Metal Inside a Star

Would it be physically possible to "store" a planet-size or larger sum of metal, say gold or platinum, inside a star by letting it fall to the core?

Would it be possible to detect which stars had these treasures inside them?

(This is for a Sci-Fi project, but I'd like to root it in reality).

The elements you drop into the star would be roughly sorted into concentric spherical shells, ordered with the heaviest elements in the middle, given enough time. There is a serious risk, depending on the masses and elements involved, that whatever you drop in starts fusing and making different elements, or if the right thresholds are exceeded, that the entire thing explodes in a supernova.

The Sun is a fairly typical star, not especially massive or puny, metallicity not remarkably high or low. I already showed that the Sun has a fair bit of metal without anyone dropping in any extra, and there are massive metal rich stars out there that have more than a solar mass worth of metals inside occurring naturally. In fact, very nearly every atom in the Universe that is not hydrogen, helium or lithium was made inside a star (and anything heavier than iron was most likely made when a star exploded). Some metals get ejected in supernovae and in stellar winds, but a large fraction of the metal budget of the Universe is already locked up in stars.

It would be possible to detect the contents of a star, with a carefully measured spectrum of the atmosphere and sophisticated stellar modelling (the spectrum serves as a boundary condition for the model). It would be more difficult than what astronomers do today since part of what goes into the models is guided by how metals are transported naturally in the Universe; artificially moving stuff around throws a wrench in the gears, but it's plausible that a concerted effort by an intelligent civilisation could develop the necessary science.

Olin Lathrop and John Rennie have raised some concerns about retrieval. I agree that a wormhole is probably a bad idea. Perhaps your best bet for retrieval is to set some carefully calculated extra mass on a collision course, stand (way, way, way) back, let the star go BOOM, wait a thousand years or so for things to cool off, then harvest the metals out of the gas of the nebula. A $1000$ year old supernova remnant is still pretty harsh conditions; the Crab nebula (exploded in the $11^{\rm th}$ century) has a temperature of about $10,000\;{\rm K}$, but rather low density. I'd call it plausibly survivable by a suitably advanced spacecraft. 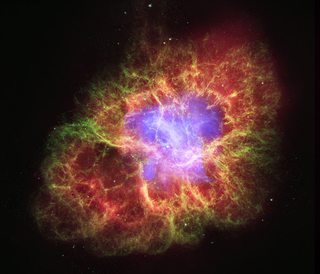 "Storing" something implies the purpose is to put is somewhere safe so that it can eventually be retrieved. Heavy metals should eventually sink to the center of a star, but how are you going to retrieve it? Even in a science fiction context, it's hard to imagine a plausible means or retreiving a large pile of heavy metal from the center of a star. Therefore, I'll say no, it's not possible.

Not the answer you're looking for? Browse other questions tagged astrophysics stars metallicity or ask your own question.

2
How to calculate gravity inside the star?
4
Resources in space, and their distribution
4
When does a planet become a star?
29
Metal-rich star formation
6
What would it be like “inside” a star?
5
What is the largest possible mass for a stable planet made of iron?
1
In fusion inside stars (sun) or very hot gasses, how do the electrons get bound and what about tritons and $D$-$T$ vs $D$-$D$ fusion?
2
Jupiter-sized planet orbiting a white dwarf?