Confusion with Grounded Conductor: bringing in a point from infinity

Suppose, for sake of argument, we have a spherical grounded conductor at the origin. Additionally, let our reference voltage be at infinity. Now, I view the potential of a point in space as being the work that I personally would have to do to move a unit charge from the reference to the point in question. Thus, I interpret this grounded conductor as points in space at which I could bring in a unit charge from infinity and end up doing no work. However, that interpretation certainly cannot be true in this case. Suppose the charge that I am bringing in is unit positive. The entire time I bring that charge towards the conductor there will be a larger and larger negative charge build-up, so I will have to exert a larger and larger force in the opposite direction the entire time I bring it in. The net work that I do in moving this charge towards the conductor will clearly be negative, not zero as the potential value would seem to suggest.

Can someone resolve these conflicting interpretations? Much appreciated.

First, one of the implications of the electrostatic potential satisfying Laplace's equation is that the extremes are at the boundaries.

On the one hand, we let our reference voltage be at infinity.

On the other, we say the sphere is grounded. "Grounded" could mean two things:

Suppose you have a conductor of charge -Q. You then ground it to earth.

Remember the charge density at the surface of earth is very low (about 0). Why? Since its radius is quite too big, any charge on it would distribute all over the surface and charge density being inversely proportional to r^2, its quite negligible 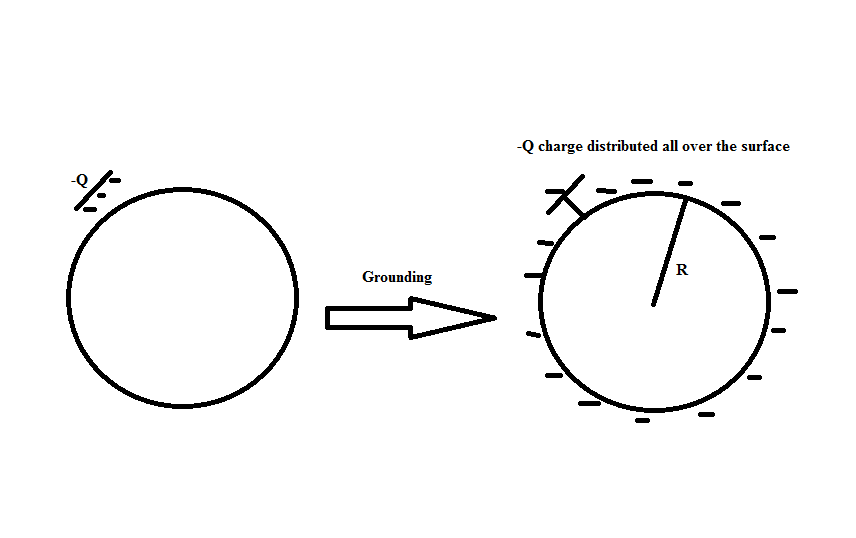 Now what? The excess electrons on the conductor flow to the earth's surface(from higher surface charge density to low) ultimately maintaining uniform charge density throughout the surface of earth and the metal.

Now V at the metal surface is same as that at the earth's surface which is almost zero due to the inverse relationship of V and r. So to bring a test charge from infinity to the metal surface requires about no work at all.

Not the answer you're looking for? Browse other questions tagged electrostatics work potential-energy or ask your own question.

0
Electric Potential, Work Done by Electric Field & External Force
5
How can the work done in bringing a charged particle from infinity to a grounded conductor be zero?
3
Field induced outside a grounded 2D circle conductor by an exterior point charge. A puzzle, not what you think!
0
Will a point charge in space have any electric energy?
1
energy of point charge within grounded sphere
0
Gravitational force and gravitational potential energy
1
Electric induction in a grounded plane conductor
1
What is the work done in bringing a charge from infinity to the location of another point charge?
0
Why electric potential energy at a point is the same as amount of work done to bring the charge to that point from infinity?