Why have they chosen this direction for current in the RC circuit? Seems pretty artificial to me 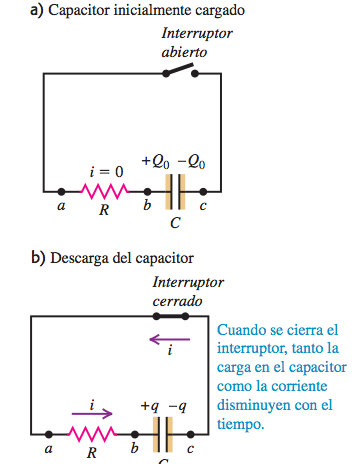 The thing is, they use this direction for current flow to derive the equation

This seems pretty artifical to me, because if I use the other direction for current, which seems more natural to me, I don't get the same equation for $q(t)$. Any ideas?

Another thing which seems artificial is that their equation produces a "negative current" which is really just there to satisfy the =0 equality. And which means, and wrongly, that the resistor is giving energy to the system and not the exterior. (That's what I think, I may be wrong).

It may seem that the current direction is artificial, but not really. It matches the direction of the electron flow in the wires. Their choice however is arbitrary because one MUST get the same answer regardless of direction choice.

Initially you should write an equation for the potential changes (aka voltages) without any reference to current. Including the current too early is simply confusing the issue.

Relationship between the current $i$ through the resistor and the charge $q$ on the capacitor must be studied very carefully, paying attention to signs. We do this by realizing that the capacitor and resistor are in series, so they will have the same effective current, $i_R=i_C$.

Paying attention to the polarity of charge on the capacitor, the effective capacitor current is $i_C=\frac{dq}{dt}$, flowing in the direction from positive plate to negative plate. That direction matches the current arrow, $i$ in the diagram, so we are okay to use this derivative as a direct substitution (no need to change the sign, which is an IMPORTANT discovery).

Combining all this gives the d.e. you listed: $$\frac{dq}{dt}=\frac{-q}{RC}$$ which yields the decreasing exponential solution.

I think you have a problem with Kirchoff's laws.Now it states that the potential drop across a closed loop is 0.

Note:May be you are confused by the direction of current,but thats just a convention.Your book seems to have used another convention.

2.Now coming to the video of Youtube.I suppose you have read the first part of the answer as it explains the equations and contains the most important part potential drop.

Actually it should be $V_c=V_r$.Now their blunder lies here... What you should do- just forget these potential differences and stuff and their equating.You have Kirchoff's laws for the same thing.The laws say that Potential dropis zero-why?As the electrostatic field is conservative-so the poential drop (or rise) is 0.But the blunder the videomaker makes is he takes both potential rise and drop together...

I hope now you understand the importance of potential rise or drop.Yes that makes it mechanical,artificial but what to do?Suppose you have a circuit like this- 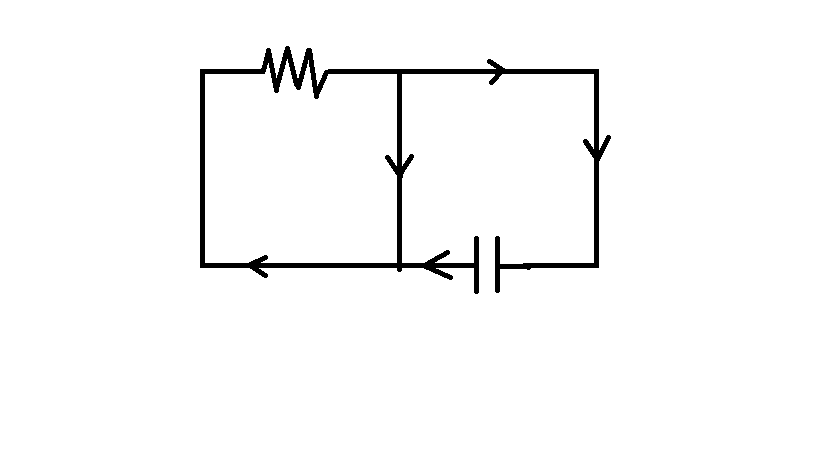 In the right loop hoe would you do it by physicsl sense?You have to apply the laws blindly.Okay even you pull it off here there exists more complex circuits.

Okay,now after this as they made this blunder it leads to their next blunderOut of the middle of nowhere the introduce a negative sign-why?to make the current positive!!!But maths equations in physics have the fame of giving you the correct signs at last.So why manipulate signs midway?

In the last part even if you do the correct way using potential drop,you will get i as negative.That is because we have and your text book has chosen the wrong direction of current.You might be wondering why i say so-i just said its different convention.BUT in the writing of equations somewhere a fault has crept in.Wanna know where??It is in the potential drop of the capacitor. You took the potential to decrease from the positive plate to the negative plate.But that happens only whan there is positive charges moving.

Aha..So the equations speak.They are saying -look man you chose the current to be clockwise...But my $I$ comes as negative So its in the opposite direction

But unfortunately the video seems to care about none of these.They just exploited the simplicity of the situation using DEAD WRONG and MISLEADING methods.

So i hope you understand my points and the mistakes of the video.If i can think of some more counterarguments i will update it.

Not the answer you're looking for? Browse other questions tagged electric-circuits conventions or ask your own question.

2
Why does current need a closed loop to flow?

0
Specific differential equation in RLC circuit
3
How to accurately mark with arrows an electric circuit
1
Why is cap voltage negative in KVL for discharge circuit?
3
Current in inductor just after switch is closed
5
Physical interpretation of circuit with battery charging capacitor
0
Diode-Resistor-Capacitor Circuit Equations
0
Is natural frequency of an LC circuit equal to angular frequency? Why don't the units match?
0
How to decide the direction of current in a LC circuit?