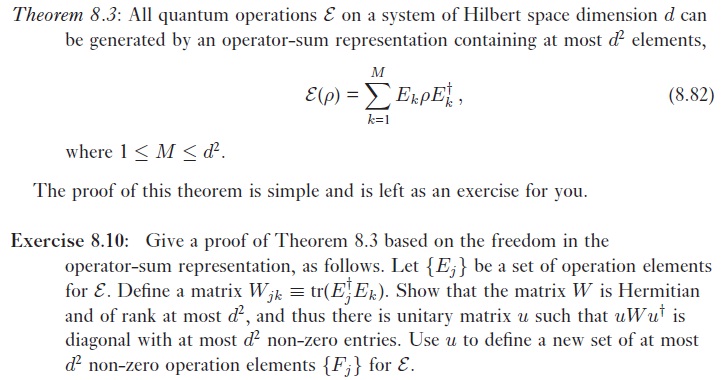 I read on wikipedia about the properties of rank of a matrix, and it says that a matrix of rank M can be expressed as the sum of M rank-1 matrices. In that case I would need to prove that the individual terms in the sum:

Is that the correct proof? Am I making a mistake somewhere?

The number of such terms is also called the Kraus rank as given in: https://en.wikipedia.org/wiki/Quantum_channel#Pure_channel

Since there still isn't an answer but the question has attracted a few upvotes, let me elaborate on my comment. This is more maths, than physics, but anyway.

Writing $\sum_{jk} \mathrm{tr}(E_j^{\dagger}E_i)|j\rangle\langle k|$ doesn't give you anything. This is indeed a rank-one decomposition, but the theorem does not tell you that ANY rank-1 decomposition has at most d^2 terms. This would be true, if $|j\rangle$ was the eigenbasis of $\mathbb{C}^d$ - but it is not. $W$ is an $M\times M$ matrix, hence $|j\rangle$ is the eigenbasis of $\mathbb{C}^M$ and $M$ could be much larger than this.

However, what is true is that $E_j\in\mathbb{C}^{d\times d}$. The key observation is that at most $d^2$ of these $E_j$ can therefore be linearly independent and this entails that $W$ can only be of rank at most $d^2$. Here is a proof (albeit not that pretty):

the $E_j$ are linear combinations of the $F_j$. But then, we can reexpress the columns of W by $F_i$ and obtain:

But then, we can see that

hence the whole column is a linear combination of the former columns. Putting everything together, $W$ can have at most $d^2$ linearly independent columns. We can then diagonalize $W$, since it is Hermitian and proceed as indicated.

3
Operator-sum representation of a quantum operation with different input and output spaces
8
Is there a straightforward method to find the Kraus operators of a given quantum channel?
1
Lindblad from infinitesimal Kraus sum representation
2
A commuting decomposition with respect to a fixed operator
0
Finding the Kraus Operators of a Quantum Channel from its Choi Matrix