How can water be liquid and gas in the same environment?

Think about it. If there's water in a gaseous form, how can there also be water in a liquid form? The gaseous water would have to have more energy than the liquid, but if it's the same temperature, how would it get that energy?

The branch of physics that studies these problems is called "thermodynamics", and it is a very successful theory as it describes most bulk matter behavior and can be used in engineering and other projects reliably.

In thermodynamics matter is composed of molecules modeled as classical particles with some collective properties that are defined by measurements.

Matter has been observed to appear in phases: 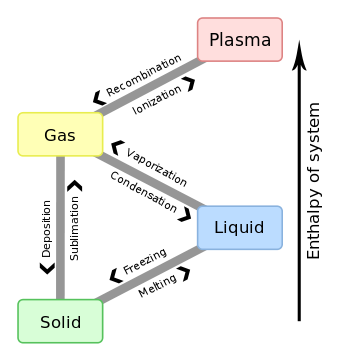 This diagram shows the nomenclature for the different phase transitions.

The variable on the right is an energy of the system variable, enthalpy.When this energy variable is large enough only gas and plasma (atoms separate into ions and electrons) phases can exist, and in even higher values only plasma. This diagram describes the observations accurately.

The gaseous water would have to have more energy than the liquid, but if it's the same temperature, how would it get that energy?

The connection of temperature in statistical mechanics, at the level of the atoms and molecules that compose matter, is 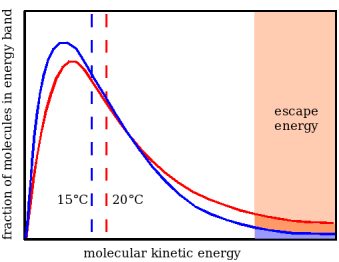 For a given temperature and pressure, it is possible for a certain amount of liquid to be in the vapor phase. At any moment, water molecules from the liquid escape to the vapor; and at the same time some of the vapor molecules go back into the liquid.

Equilibrium is established when the rate of these two processes is the same. At what (partial) pressure that will happen is a function of temperature.

Example: start at a low temperature. Very few water molecules from the liquid have the energy to escape; so if even just a few molecules per second hit the water and "stay", you have equilibrium at low vapor pressure.

Now increase the temperature of the water. More molecules can escape - initially exceeding the rate at which molecules return to the liquid phase. The partial vapor pressure builds, until the two rates are once again the same.

Not the answer you're looking for? Browse other questions tagged energy water or ask your own question.

1
Why isn't steam/cloud blue like liquid and solid water?
6
How to calculate the heat transfer rate between the liquid and the gas?
18
How hot would tritium water be?
0
How long can water hold elevated pressure and energy after opening pressure cooker lid?
1
Is water vapor in a metastable state at 1 atm and at room temperature?
0
How would a fixed triple point of water cell respond if the pressure was raised with additional (liquid) water?
0
Can water in solid state (ice) be at such a low temperature that in contact with liquid water at 0, freezes it and leaves it at a lower than zero C°?