What is this light pattern caused by LED matrix street light?

At our office, they have installed new downlights in the parking lot (street lights) based on a rectangular matrix of very bright LEDs, which are not diffused. They look something like this one: 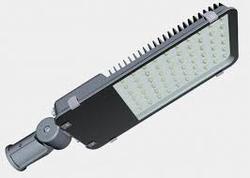 They provide quite even (diffuse) lighting over most of the parking lot, but I have noticed that underneath the trees in the lot, a very clear "grid" or "stippled" pattern appears on the pavement etc., like this: 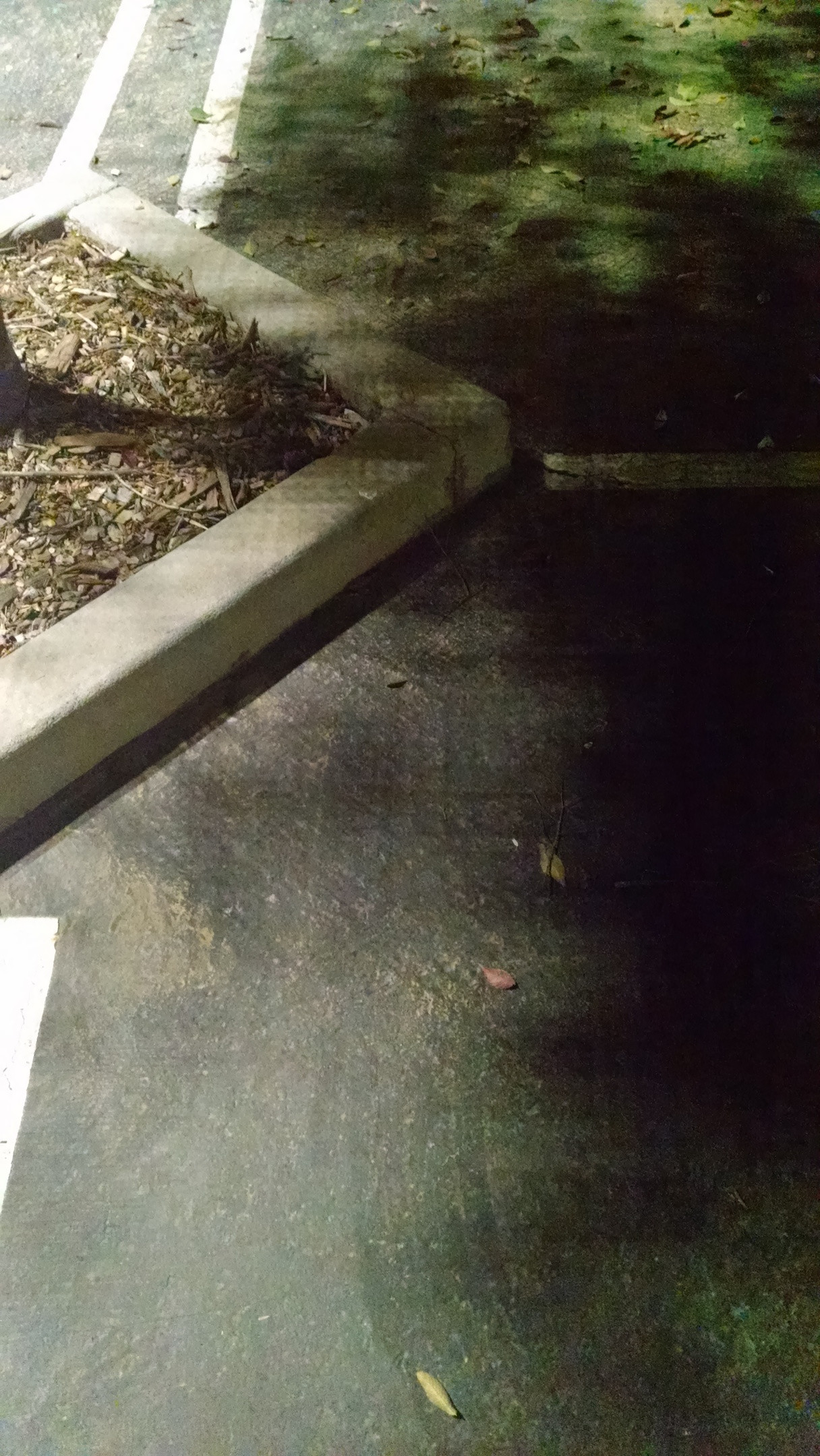 I am quite curious as to the cause. I have theorized about it being either due to the effects from something like the double slit effect or the tree leaves forming some kind of a natural lens. However I'd love for someone with more background in physics to give their thoughts on it.

optics visible-light interference
Share
Improve this question
edited May 6 '20 at 21:41

The small gaps between the leaves of the tree act as pinhole cameras that create images of the light source. The smaller the gaps, the sharper the image. In other words, you are not seeing an interference pattern, but an image of the light source itself.

This effect provides a way to safely view solar eclipses. Note that the larger gaps between branches do not provide a sharp image, only the small gaps between leaves. The trunk and large branches are still visible. 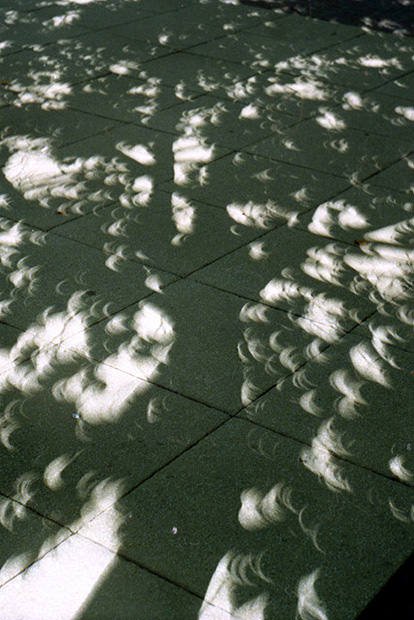 Have noticed this same phenomenon my self, and it ONLY happens with the same kind of LED street lamps that you mentioned here.

Also, seems like ANY shadows (even tree trunks or my own shadow) created by this light produces a similar "diffraction" like pattern along the boarders of the shadow (again this only seems to happen with these type of LED street lamps as the light source). This seems to indicate there is more than a "single/double slit" effect going on (but could still be the same underlying mechanism; which depends on each LEDs light being "Coherent").

I also thought that it might be a diffraction pattern, but that it might be being created by destructive/constructive interference between the light produced by each LED and it's neighbors on the array (i.e. over lapping peaks and troughs of the light waves amplify or cancel each other out, creating this dark/light pattern). For this to occur though, I think all of the light would need to be coherent (i.e the difference between their waves needs to be constant, and non-random). Not totally sure if this is a valid assumption for these light sources, however I could see an array of tightly packed LED lights possibly meeting these requirements given the way that LED light is produced.

Note: Funneling diffuse light through a narrow opening is a good way to get your output to be coherent, which I think is the driver behind the "double slit" effect; but there should be ways this can occur without requiring a narrow aperture. All of the light produced by sources such as lasers and possibly LEDs may lend themselves better to coherence due to the mechanisms by which they are produced, given that they produce light at more narrow, less chaotic, bands of the visible spectrum, but again this is just speculation on my part.

Would love to hear what insights into this anyone else may have (as I have been curious about this as well for some time!).

Here is a pretty comprehensive video explaining the mechanics of LEDs incase anyone is looking for further food for though: https://www.youtube.com/watch?v=4y7p9R2No-4

Also, heres some additional food for thought from Sixty Symbols. The video is titled "A look at sodium street lights", and do a side by side spectral analysis of with LEDs: https://www.youtube.com/watch?v=O7mEBpJVJbA&t=150s

Not the answer you're looking for? Browse other questions tagged optics visible-light interference or ask your own question.

7
What is the best way to collimate light emitted by a LED?
6
Would there be fringe pattern in this arrangement?
47
What causes this pattern of sunlight reflected off a table leg?
13
What's the origin of the flattened X that appears when of a small (but powerfull enough) light is reflected in our non-powered TV screen?
5
Strange interference pattern of light on top of tower, pattern was seen on air. What was it?
26
Why does light reflected from an LED TV screen make a sharp X pattern?
0
How to scale an object in near eye optics and have it appear at correct height at a distance?
0
Optics for photographing degree of polarization?