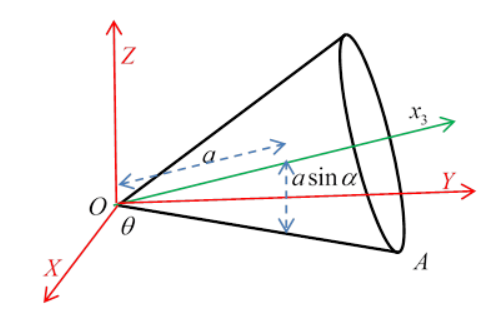 Now the instantaneous axis of rotation (IAR) of the cone is the 'line' that is touching the ground right? So how do you find the velocity of any other point using that? I mean, in the rolling wheel, you multiply the angular velocity by the distance from the IAR to get the velocity. Is it the same here?

If it is, then consider the center of base of the cone. If the height of cone is $h$ then its distance from the IAR is clearly $h\sin x$ where $x$ is the cone's half apex angle. So its velocity should be $ah\sin x$, where $a$ is the angular velocity with which the cone is rotating. Is this right?

Now we can also analyse the cone's motion by considering it in two parts: rotation + revolution, right? So again considering the center of base of the cone, it has no velocity by virtue of rotation (since the cone is rotating about an axis through the center), right? And by virtue of it rotating in a circle (of radius $h\cos x$) around the axis passing through its vertex, it has velocity $bh\cos x$ , where $b$ is the angular velocity with which the cone is revolving.

But Wikipedia states here that the ratio is $\sin x$.

And at the same time, this video (which I found in the external links section of the Wikipedia page) states that $a=b\cot x$ which is same as what I got.

I'm really confused. Is everything that I did right? If not please correct me. Thank you.

How to find velocity of any point on the cone? There ought to be two approaches , one using IAR and another by considering motion as rotation + revolution but I'm not able to do it.

Let the cone lie on the $\hat{X}\wedge \hat{Y}$ plane (z=0) and let the $z$ axis pierce this plane at the cone's apex. If the cone's half angle is $\alpha$, then its axis of symmetry as a function of time is defined by the vector

where $\omega_0 = 2\pi/\tau$ and $\tau$ is time it takes the cone to make exactly one circuit on the $\hat{X}\wedge \hat{Y}$ plane. Thus the cone's axis of symmetry rotates with angular velocity $\omega_0\,\hat{Z}$. I define my directions and symbols below: 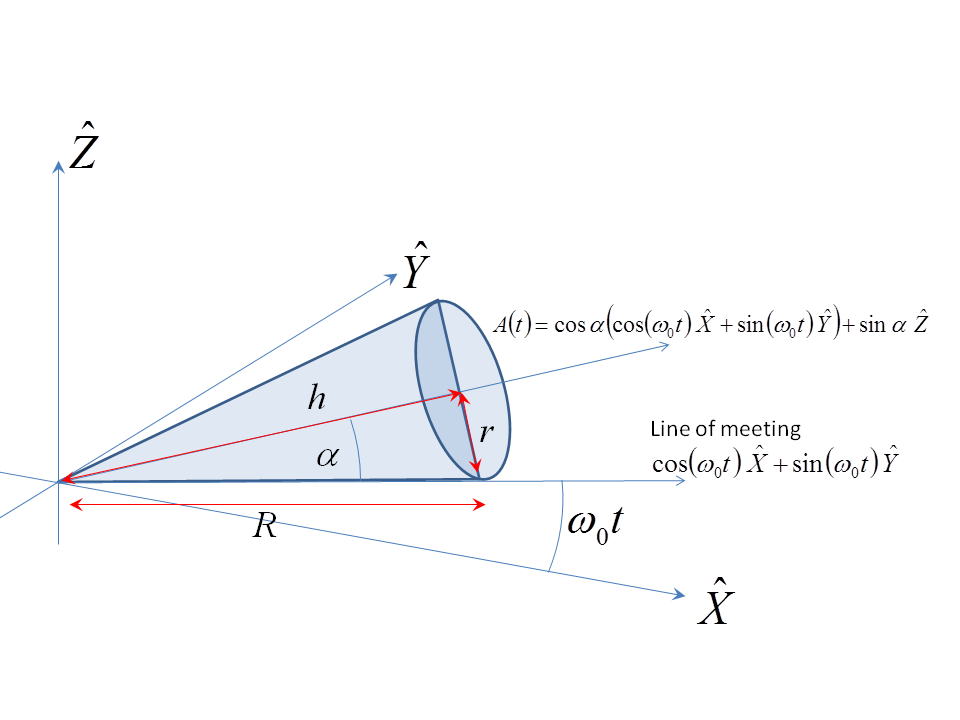 If the cone doesn't slip, this means that the rotation about the axis $A(t)$ has an angular velocity $- \omega_0 A(t)/\sin\alpha$. Sketch the cone near the apex to see this: at a distance $R$ along the edge (defined by the vector $\cos(\omega_0\,t) \hat{X} + \sin(\omega_0\,t) \hat{Y}$) in the $\hat{X}\wedge \hat{Y}$ plane where the cone meets the plane, the tip of this edge moves at speed $v_e=\omega_0\,R$. The circular cone cross section (orthogonal to the cone's axis of rotational symmetry) through this point is like a wheel of radius $r=R\,\sin\alpha$ cambered inwards at angle $\alpha$. This "wheel" must spin at angular velocity $-\omega_0\,R\,A(t)/r$ so that its rim's velocity is $-v_e=-\omega_0\,R$ to offset the velocity $v_e=\omega_0\,R$ of the edge at this point and keep the point of the wheel in contact with the ground stationary.

We add these two angular velocities to get:

which, as you correctly guessed, is always along the line where the cone meets the plane.

Note that we get the same answer by simply working this speed out for an angular velocity $\omega_0\,\hat{Z}$, which is valid because the axis of the cone has no velocity owing to the rotation in the direction $A(t)$. The point on the cone's axis of symmetry is a distance $h\,\cos\alpha$ from the $\hat{Z}$ axis. Thus the speed is, as before, $\omega_0\,h\,\cos\alpha$.

Not the answer you're looking for? Browse other questions tagged reference-frames rotational-kinematics or ask your own question.

0
Angular Velocity About Instantaneous Axis of Rotation
8
How do we formally define the "angular velocity vector" of a point about an axis?
7
Rolling without slipping, general analysis
4
What is the general no slip condition for rotations?
3
Forces on a rolling cone on a plane surface

0
"One can properly speak of the angular velocity of a rotating object without reference to a specific axis of rotation"?
1
Why starts the rotation vector of a body in the intermediate axis theorem to rotate in the same direction as the body?
6
Finding accelerations using Instantaneous axis of rotation
5
Relationship between Radius of curvature and Instantaneous Axis of Rotation
1
Parallel shifting of mass while calculating moment of inertia only seems to work for linear objects
2
Can a rotating body have two instantaneous axis of rotation at a particular instant?