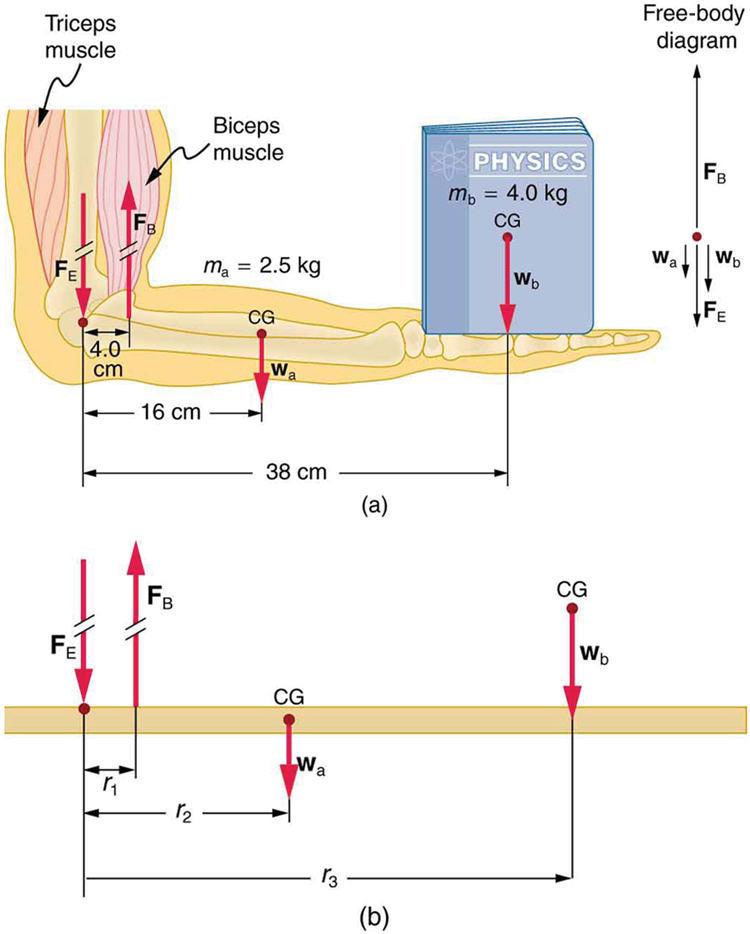 Why does the humerus, the elbow joint, exert a downward force in the following setup. I understand that the bicep must be involved in a force pair, but I identified the counterpart to the bicep's force (Fb) as the bone (basically, another body part) pulling the bicep downwards. The explanation I found is:

"Because muscles can contract, but not expand beyond their resting length, joints and muscles often exert forces that act in opposite directions and thus subtract."

Why does the muscle's inability to expand give rise to the humerus's downward force?

On the one hand the torque about the joint must be zero, otherwise the arm would have some angular acceleration. Treating positive forces as directed in the directions they are drawn, this tells us $$ r_1 F_\mathrm{B} = r_2 w_a + r_3 w_b. $$ Given all the distances and weights, you can solve for the tension $F_\mathrm{B}$ in the biceps.

As a result, the bone undergoes a compression to balance things with $F_\mathrm{E}$. In fact much of what the skeletal structure does is provide pushing forces to balance the compressive load being put on it.

I don't see how the inability to expand gives rise to this force. I would explain the forces like this:

Force $F_E$ is downward to prevent the hand from rotating. It is due to the balance of moments. Take $F_E$ away, and the arm is going to accelerate clockwise.