Capacitors and Resistors - Series or Parallel?

The switch for the supply is turned on for 10 seconds, at which point it is turned off again.

When the switch is turned off we are left with a simple circuit containing two capacitors and two resistors. We are asked to find the initial current in the circuit, and also the voltage across each capacitor once a steady state has been reached. This involves finding both the total resistance and the total capacitance.

In calculating the initial current, the resistances are simply added together as if in series (this is what I would expect).

However, when finding the total capacitance for the voltage calculation I feel there is a somewhat contradiction because the capacitances are simply added together as if in parallel.

How is it that in such a circuit, the resistors are in series, and the capacitors are in parallel? Is this an error in the problem or is there a genuine reason for this? 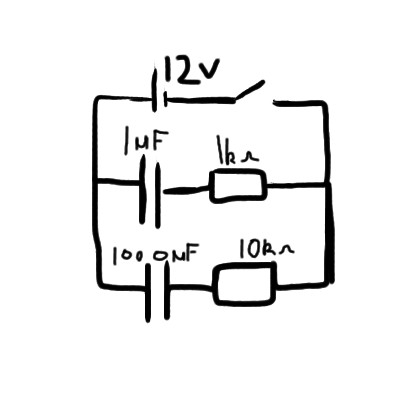 EDIT: I now understand that the capacitors are in series as they have the same current through them, but if that is the case why can one simply add their capacitances together as though they are in parallel? I am a senior in high school so I'm looking for a reasonably simple answer.

When the switch is opened, the circuit is the equivalent of this, so I think you can clearly see that the resistors are in series and so are the capacitors. 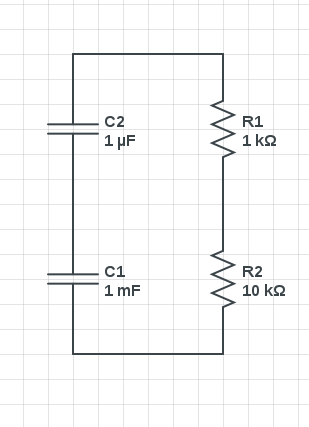 Here the capacitors look like in series but they are not actually. Capacitors can be said to be in series only if they carry same amount of charge which is not the case here.If you calculate charges will come out to be different.Look at the time constants(R*C) for the first branch and second branch, they are 1ms and 10sec respectively. As switch is on initially for 10sec upper capacitor will charge almost fully ($Q=12\mu\text{C}$) while lower branch capacitor will have a charge which is approximately only 63% of the steady state charge (by defination of time constant).You can also use the general result for charging which is $Q=Q_0(1-e^{-t/T})$ where $Q_0$=steady state charge(charge appearing if we would have charged it for a very long time), $T$=time constant, $t$=given time. After calculations you can see charges are different on both the capacitors and hence they can not be considered in series. So you have to go by kirchoff's voltage law for initial current calculation.So first calculate charges after 10sec and then and then voltages across both the capacitors and then apply kirchoff's law for initial current calculation.

After the switch is opened, we have a series circuit - the current through each circuit element is identical and equal to $i(t)$.

Taking the time derivative of both sides and rearranging yields:

As expected, the resistances and capacitances combine as appropriate for series connected circuit elements:

We are asked to find the initial current in the circuit, and also the voltage across each capacitor once a steady state has been reached.

The initial current is given by

but we must be careful to note the sign convention.

In other words, we expect that

Since it is stipulated that the switch is closed for 10 seconds before opening at $t=0$, we can calculate the initial voltages

and thus, the initial current.

In steady state, the series current is zero which means that the capacitor voltages add to zero, i.e., are equal and opposite.

The best way to go about these kind of problems, is to use Kirchoff's loops.

Whenever there is ambiguity about parallel/serial, Kirchoff is the way, since you disregard the question of serial vs. parallel altogether.