What happens for the spins around the phase transition

where $\nu$ is the critical exponent. This equation describes the divergence of the correlation length as the temperature approaching $T_c$.

However, it gives no direct physical picture of the spins near the $T_c$ because we need to compute the summation over each pair of spins to find the correlation. So the question is: If we really look at the lattice, what is the most obvious feature and scaling that we can obverse?

In two dimensions, a lot is known / conjectured about statistical models at criticality. For instance, at $T_c$, the spin configuration that you see will not only be self-similar (what others here have been calling "fractal") but actually fully conformally invariant (in the continum limit); that is, the probability distributions ("ensembles") are invariant not only under scale transformations, but indeed, under any transformation which preserves angles. (I think conformal invariance is expected in models with "short-range" interactions at criticality in any dimension, but it's only well understood in 2 dimensions).

Let me go a bit more into what "conformal invariance" means. Consider the following "thought experiment", which you might try with a computer simulation. First, intersect a disk with a square lattice with side length $\epsilon$ with $\epsilon$ quite small. On this finite graph, draw a random spin configuration for the Ising model at criticality. Call this ensemble "A".

Now, perform a conformal mapping of a disk onto whatever (simply connected) shape you like, say a triangle or a square (this is guaranteed by the Riemann mapping theorem). Approximate this shape with a square lattice with side $\epsilon$ and draw a random critical Ising spin configuration for this. Call this ensemble "B".

Here's some illustrations from slides of Stanislav Smirnov (who recently won a Fields medal for related work!). 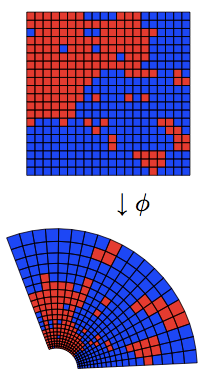 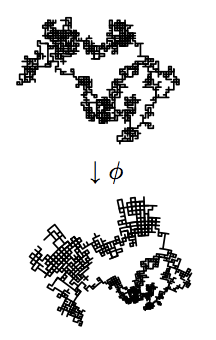 On the left is a critical Ising model configuration under a conformal transformation; on the right is a random walk under a conformal transformation. You have to kind of use your imagination to see that (other than finite lattice effects) the pictures would be similar to those if you just ran a Ising model or random walk in the funny shapes below.

This has recently become a hot topic in mathematics, due to the breakthroughs in Schramm-Loewner evolution, though it has been studied a bit longer in physics using the less rigorous techniques of conformal field theory.

I've been kind of vague above about what conformal invariance means for individual "pictures" of spins (well, most of the claims are about probability distributions). You seem to be dissatisfied with various claims about correlation functions; I also feel that these are often a bit hard to grasp geometrically. There is one solidly geometric thing that one can say about certain lattice models at criticality, and this is about the boundaries between spin clusters.

The boundaries between up and down spins in the Ising model at criticality form an ensemble of closed loops in the plane. This loop ensemble is believed to be related to SLE $\kappa=3$ curves; this is a very particular (conformally invariant) ensemble of random planar curves. SLE curves are parametrized by a real number $\kappa\geq0$, when $\kappa=0$ one just has straight lines, as $\kappa$ gets larger, the curve gets more "wriggly", the fractal dimension of these curves is equal to $1+\kappa/8$ for $\kappa<8$ (thus in the continuum limit, boundaries between Ising spin clusters are expected to be 11/8 = 1.375 dimensional!). For $\kappa\geq8$, the curves actually become plane-filling!

All of the things I talked about above do not hold except when you are exactly at $T=T_c$. For the Ising model, it is sometimes hard to generate spin configurations at $T=T_c$ due to critical slowing down of Markov chains which are used, but there are many other systems such as critical percolation which are easier to study.

One good place to start reading about conformal invariance in lattice models for a theoretical physicist is Malte Henkel's book "Conformal Invariance and Critical Phenomena". Of course if you're serious, you'll eventually turn to the big yellow book by DiFrancesco et al on conformal field theory...

A good intro to SLE for physicists is this one by Ilya Gruzberg. Probably it won't be long before some books combining the SLE approach with the CFT approach start coming out.

The correlation length is something that you can see from the spins (looking at the lattice). You can determine it from a sequence of snapshots of an Ising model simulation. Visually, as the critical point is reached, you will see that the typical size of clusters having the same magnetization (up or down) becomes larger and larger, and this size is none other than the correlation length. This seems to me to be a very "direct physical picture."

Not the answer you're looking for? Browse other questions tagged statistical-mechanics phase-transition or ask your own question.

9
Why is the correlation function a power law at the critical point?