Why do radio waves, X-ray and gamma rays penetrate through matter? Can anyone explain me this in terms of incident energy or wavelength of the photon and the effective cross-section that these photons face while interacting with matter. I want to understand the physical process by which this cross section is low for X rays and gamma rays.

Also why is the probability of knocking an electron out of K shell by X rays is high?

This is the electromagnetic spectrum: 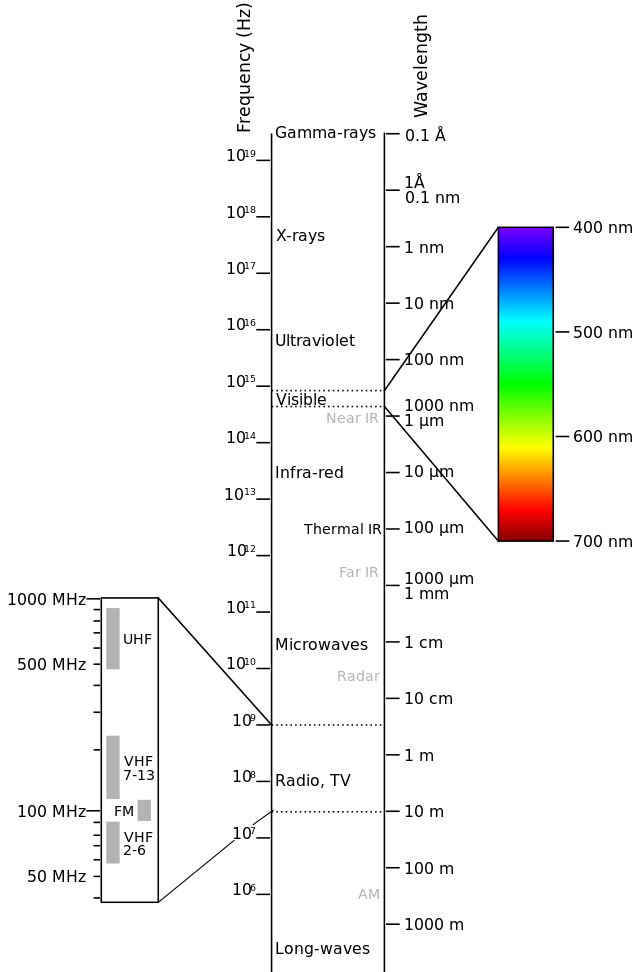 Note that radio waves are on the other side of the visible spectrum than gamma rays and xrays. The answer though is the same: penetration depends on the frequency.

Radio waves are low frequency/large-wavelength, the wavelength much larger than the interatomic distances, and the vibrational energy levels absorb frequencies down to microwaves but not radio waves. Thus radio waves can go through bulk matter for some distance before attenuation diminishes them.

By contrast the wavelength of x-rays is smaller than the interatomic distances and thus they can penetrate matter, unless they scatter directly and transfer the energy to the lattice or the atoms. Gamma rays have even smaller wavelengths and have higher penetration probability, and due to the higher energy ( E=h*nu for each photon) can do more damage when hitting a nucleus.

But radiations are just waves, how can we say that small wavelengths correspond to radiation passing through small gaps?

Electromagnetic radiation is not "just a wave" , it is an emergent phenomenon. In a similar way that if one looks at water waves, they are an emergent phenomenon from the motion of innumerable water molecules moving coherently, all electromagnetic radiation is a coherent confluence of zillions of photons, the quantum of electromagnetic energy. If the frequency of the EM wave is nu, each photon carries energy equal to h*nu, where h is Planck's constant a very small number h=6.62606957(29)×10^−34 Jsec .Photons are elementary particles moving with the velocity of light.

Atoms are composed of a positive nucleus and a probability cloud of electrons, organized in electron shells. A probability cloud is the square of the quantum mechanical solution of the potential nucleus-electrons and has energy levels, well defined. If the incoming radiation has a frequency/energy-of-photon that matches the energy level an electron is in, there is a high probability of a photon being absorbed and kicking an electron out.

K shells are the more tightly bound shells, i.e. higher energy is needed to kick off an electron. An Xray photon with the appropriate quantum of energy has a higher probability of scattering an electron from the ground shell, since the outer electrons are less tightly bound. Outer electrons quantum levels are of order of eV energies not the keV of Xrays.

41
If both radio waves and gamma rays can travel through walls
0
The nature of light
3
Electromagnetic radiation lenses
5
Why don't X-rays/Gamma rays ionize all the atoms at the surface of a material?
0
Cardboard allows AM/FM waves but NOT light - Why?
33
How can wifi penetrate through walls when visible light can't?
1
Characteristic spectra
17
Relation between radio waves and photons generated by a classical current
3
How do antennas work?