Is fluorescence from a single atom/ion visible with the naked eye (e.g. in a strongly coupled trap or cavity)

I remember sitting in on a conference talk by a person (possibly Rainer Blatt) doing research with trapped ions (or single atoms strongly coupled to light in an optical cavity), and the person showed a photo of the trap with dots of light from the fluorescence of the single atoms/ions. I thought the person mentioned you could see this with the naked eye b/c the optical coupling to the ion in the trap was so strong, but thinking about it now I'm not sure if this can be true and I can't seem to find any (obvious) reference to this in the literature.

So my question: Is it possible to see light from a strongly coupled single atom or ion with the naked eye? If so can you point me to a reference (and hopefully an image of this as well)?

Note: The best I can find is the image below from the Blatt research group taken with a CCD (details here). However it is not at all obvious that this would be visible to the naked eye, or if the exposure was just set very high on the camera.

Experiments with trapped ions generally use fluorescence for detecting the ions. This means that they use a strongish pump to take the ion from its ground state to a dipole-allowed excited state and wait for the ion to decay by emitting a photon in a random direction, and then re-run the cycle over and over. This means that each ion essentially emits one photon per natural lifetime of the line, which can be quite often (in atomic terms) for dipole-allowed lines.

One example, taken from this paper, is an $S$-$P$ line in $\mathrm{Ca}^+$ with a linewidth of 21 MHz, at 397 nm. This means that each individual ion will emit about 20 million photons per second or so, evenly spread about $4\pi$ solid angle. This is in general just below the limit of human sensitivity but if you had a high enough numerical aperture and a dark enough background you could in principle do it. I asked the authors and they said that they can't do it because of lack of sufficient optical access (they have huge magnets in the way) and they don't know anyone who does but in principle it's just about doable.

The human eye, in dark-adapted conditions, has been shown to be capable of detecting a single photon (which is to say, the retina reacts, the signal gets to the brain, and [magic happens] to generate a response in the conscious parts of the brain. Since what you're asking about is the release of one photon, it doesn't matter what the source is. So long as the photon's wavelength is in the responsive range of the retina and there's no optical 'noise' to drown it out, it can be detected.

Edit in response to comments:
The referenced article (which is a bit old) actually concludes that detection of 9 photons within the time constant leads to brain detection at 60% probability. I strongly suspect that, at some low probability, a single photon might trigger a brain detection. If I can find another study report, I'll include that here.

With many thanks to EmilioP for finding this paper , it does appear that a single photon can be detected

with a probability significantly above chance

Yes, a single atom/ion can be visible with the naked eye, and a photo of a single Strontium ion is shown below to demonstrate what this looks like (image from here).

This photograph was taken by David Nadlinger, a scientist at the University of Oxford who stated, "The idea of being able to see a single atom with the naked eye had struck me as a wonderfully direct and visceral bridge between the minuscule quantum world and our macroscopic reality." This image won The Engineering and Physical Sciences Research Council's 2018 National Science Photography Competition. 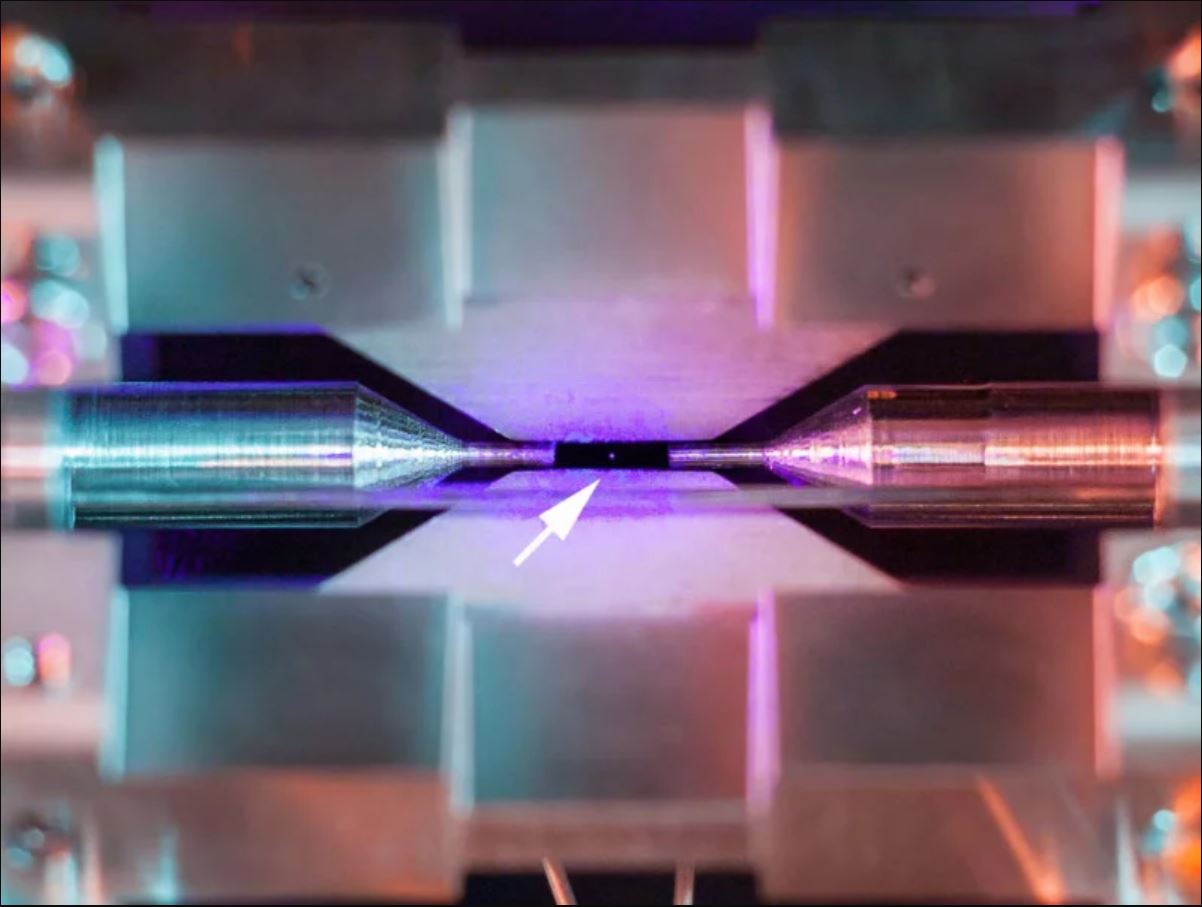 I see no reason why not. As the answer from Emilio argues, it's not hard to get scattering rates in the millions of photons per second. To take this a step further, suppose you put your head around 10cm away from the light source to get a good look. With a 3mm aperture in your eye, you'd collect $$ \frac{\pi(3*10^{-3})^2}{4\pi(0.1)^2} = 0.000225 $$ of the light, or if you're scattering order 10 million per second, $0.000225\times10^7=2250$ photons, which should be a good deal above the threshold for your eye even after dividing by a factor appropriate for the frame rate of your eye. Of course use any magnifying glass and this quickly gets much easier.

Note that in practice this is complicated by:

Not the answer you're looking for? Browse other questions tagged optics experimental-physics atomic-physics ion-traps or ask your own question.

5
Can a naked eye see a single atom when it is resonantly driven by some laser beam?
105
How can we see an atom now? What was the scale of this equipment?

1
Experiment regarding myopic correction by a manipulation of fingers?
2
Calculating lens focal point and size for head mounted display
105
How can we see an atom now? What was the scale of this equipment?
1
Can single photons make a hologram over time
1
The hamiltonian of single trapped ion model: ion trap quantum computer
0
How do lens capture reflections clearly?
0
Optics for photographing degree of polarization?
1
Understanding details of the chromatic aberration depicted in this simulated image from NASA