What are the average matter, antimatter, and binding energy composition of protons and neutrons?

For a free baryon at rest at room temperature, how much of its ~1Gev (rest) mass can (on average) be considered as matter, as antimatter, and as binding energy?

For a baryon in a nucleus, I assume this will also depend on the intranuclear pressure. Please, references, if possible. Note the related question 13809

Motivation: I have read that the uud quarks in a proton say correspond to less than 1.5% of its ~938 Mev rest mass. I am asking about the remaining >98.5% of its rest mass. I would have naively assumed that it splits 50/50, but that is apparently wrong. Also, I have also read that all of the remainder is all binding energy. But that has also been contradicted.

Well, you can add up the masses of the three light quarks in a proton (uud) and figure out how that compares to the total mass of $938\text{ MeV}$:

But that doesn't tell you much of anything useful, because the quark masses are actually running parameters (they vary with energy scale) and more importantly, because the structure of a baryon is not that simple.

According to QCD, a baryon actually consists of a whole "sea" of quarks and antiquarks, along with the gluons and photons that bind them together. To further complicate things, gluons and photons can convert into virtual quark-antiquark pairs and back again, so you get varying mixes of these particles; and in fact, as you might expect since a baryon is a quantum system, the proportions change depending on how you measure them.

Particle physicists characterize the composition of baryons with parton distribution functions (PDFs). In a simplified model, a parton distribution function gives the probability density for detecting a particular kind of constituent inside a hadron. It depends on two kinematic variables: $x$ is the fraction of the total hadron's momentum carried by the parton you detect, and $Q^2$ is the negative squared four-momentum of the thing that interacts with the parton (i.e. a photon or gluon).

For example, suppose you fire a large number of virtual photons, with four-momenta $q^\mu$ uniformly distributed in the range $Q_1^2 < |q^2| < Q_2^2$, at a proton with (3-)momentum of magnitude $p$. The fraction of them that will interact with an up quark that carries a momentum between $x_1 p$ and $x_2 p$ is given by

There is one of these functions for each kind of quark, antiquark, and gluon in each different hadron: $f_{\mathrm{d}/\mathrm{p}}$ for down quarks in a proton, $f_{\mathrm{\bar{u}}/\mathrm{n}}$ for anti-up quarks in a neutron, etc.

If you interpret these PDFs as probability densities, you can calculate the contribution of each different kind of parton to any particular physical quantity by taking a weighted average. For example, the expectation value of the number of up quarks in the proton is given by

and similarly for anti-up quarks, down quarks, etc. These values have to satisfy

which is the technical expression of the idea that the proton consists of two up quarks and one down quark.

Evidently, the issue of figuring out the composition and properties of a baryon comes down to determining these parton distributions. So what do the PDFs look like? Unfortunately, we can't calculate them from fundamental principles using perturbative QCD, which is the main tool of most physicists who study baryon structure, but we can relate them to experimental data. There are several groups of physicists which periodically release "global fits," which give the form of the PDFs taking into account all (credible) data collected from major experiments up to that time. They use slightly different fitting algorithms and data filters, but the different results are mostly comparable. The "standard" source (by which I mean the one-stop PDF fit reference that most people will give you) for this data is the Durham PDF server. (Note that we mostly only have data for protons, since they are what gets used in the experiments.) As an example, the latest results from the CTEQ collaboration for protons at momentum transfer $Q^2 = 100\text{ GeV}^2$ look like this: 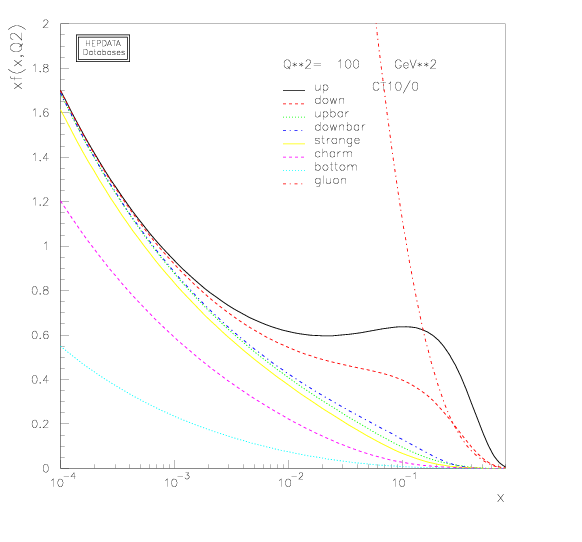 Notice that the up and down quark distributions have bumps roughly around $x = \frac{1}{3}$, which reflects the fact that there are three valence quarks in the proton and therefore there is some tendency towards finding one of them carrying around a third of the proton's momentum. You would expect that if a proton was just three quarks and nothing else, but in that case it would be a sharp spike, not a broad bump.

Unfortunately, this still isn't enough to actually answer your question, for a couple of reasons. Remember that the parton distributions depend on the momentum transfer of the probe ($Q^2$), so it's not necessarily meaningful to ask what the proportion of matter to antimatter to "binding energy" is unless you specify a particular value of $Q^2$, i.e. specify the parameters of the experiment you're doing. Also, PDFs have been measured only for high-energy scattering experiments, at large values of $Q^2$. There are equations, called the DGLAP equations, that tell us how the parton distributions change as $Q^2$ changes, but they only apply at relatively large values of $Q^2$ - precisely the sort of high-energy scattering experiments that the data is collected for. You can't extrapolate all the way down to zero momentum transfer (a proton at rest) because other unknown physical effects will come into play at lower values of $Q^2$.

You can make some simplifications to this, though. First, at the typical energy scales involved in a particle accelerator, the masses of the light quarks (uds) are so small as to be entirely irrelevant; furthermore, the proton has such a high longitudinal momentum $p$ that any transverse momentum not created by the collision is probably negligible. Also, as shown by the graph above, the quark distributions drop off pretty quickly with increasing mass for the heavier quarks - in other words, the bottom and top PDFs $f_{\mathrm{b}/\mathrm{p}}$ and $f_{\mathrm{t}/\mathrm{p}}$, and perhaps even the charm PDF $f_{\mathrm{c}/\mathrm{p}}$, represent very small contributions to the total energy. And finally, over a very small range of $Q^2$ we can assume that $f$ is nearly independent of $Q^2$, so the integral over $Q^2$ gives $\ln\frac{Q_2^2}{Q_1^2}\approx 1$. So we're down to calculating

Conveniently, this integrand is exactly what the Durham PDF calculator will give you, so it's easy to do the numerical integration. The integral works out to about 0.26 for the up quark, 0.13 for the down quark, and 0.025 for the strange quark, so we're looking at a result of

If you assume that the proton's mass of $938\text{ MeV}$ is negligible relative to its momentum (which is the case in modern accelerators), this means that about 41% of an accelerated proton's energy can be attributed to matter. Doing the same calculation for the antiquarks yields a factor of 0.032 for anti-up and 0.038 for anti-down, and if you assume that the strange and anti-strange quark PDFs are the same (which is not rigorously justified, as far as I know, but seems reasonable), you get a total for the antimatter of

And finally, integrating the gluon distribution gives a contribution of

All together, these numbers come within about 5% of adding up to 1, which tells us that the factors I've neglected (heavy quarks and masses) probably don't make much more than a 5% difference.

If you'd like to read more about this sort of thing, I would recommend looking at textbooks, because there isn't just one paper that will tell you everything you need to know.

Not the answer you're looking for? Browse other questions tagged particle-physics nuclear-physics or ask your own question.

109
What's inside a proton?
18
Conversion of mass to energy in chemical/nuclear reactions
14
What is an intuitive picture of the motion of nucleons?
1
Why are the antimatter compositions of neutrons and protons different? Why by about 1%? References?
3
How to describe hadron-hadron strong interactions from QCD?
1
QCD Parton Branching - Is the angle always negligible?