I'm trying to understand why rockets have multistages releasing their fuel tanks. Say a rocket $R$ has two fuel tanks $A$ and $B$, which respectively have masses $m_a$ and $m_b$, and the mass of the fuel in the respective tanks is $m_{fa}$ and $m_{fb}$. Let $M$ be the total initial mass, and suppose the rocket starts from rest. We use the equation $v-v_0=v_{ex}\ln(m_0/m)$, where $v_{ex}$ is the (constant) speed of the expent fuel.

Now I'm not seeing how to show $v_f$ is greater in the second case, so I'm thinking I made some mistake in the argument. Can anyone clear things up?

The answer is right there in your own math.

In most cases, that break even point is a two or three stage launch vehicle, possibly carrying a payload that is itself a rocket. (A single stage rocket that can carry a reasonable sized payload to orbit is beyond the capability of currently available engineering, physics, and chemistry.) The most complex vehicle ever built was the rocket that brought humans to and back from the Moon, which comprised eight stages in total:

Put your math aside for a minute, and take a lesson from Robert H. Goddard, in one of my all-time favorite papers.

Basically your rocket consists of a payload H, and the rest of the rocket consisting of fuel mass P, plus non-fuel mass (i.e. tank) K. The secret is, as you shed P through combustion, you must also shed K. Otherwise as P gets smaller and smaller it is trying to accelerate dead weight. 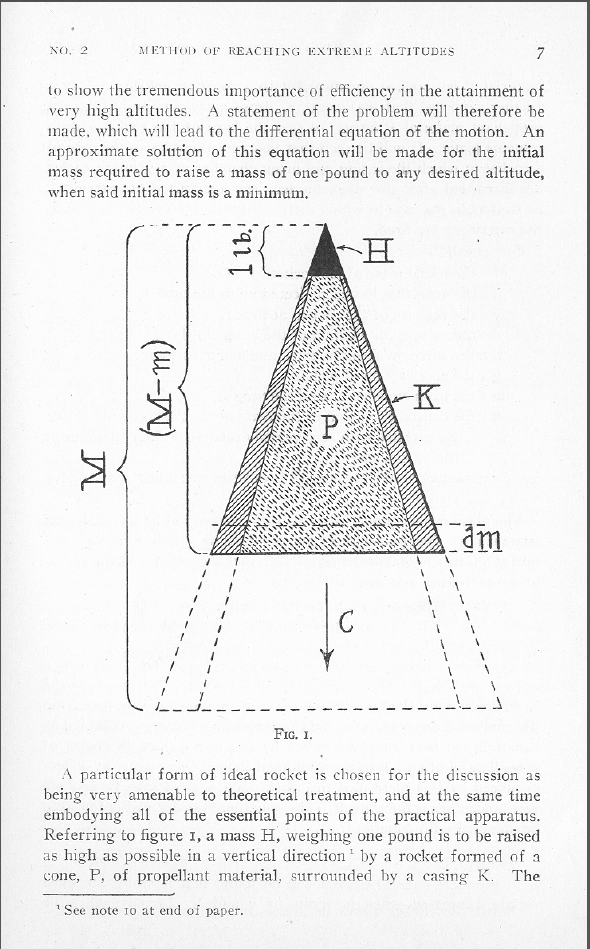 Not the answer you're looking for? Browse other questions tagged newtonian-mechanics velocity rocket-science or ask your own question.

14
Why do rockets have multiple stages?
58
Why are rockets so big?

0
Calculation of velocity via kinetic energy and momentum yielding different answer
3
Fallacious derivation of the rocket equation
2
Deriving the Tsiolkovsky Rocket Equation using the rate at which the fuel burns
0
Derivation of Tsiolkovsky rocket equation
1
Find COM velocity with respect to laboratory reference frame
2
Two rockets, A and B, are initially close together and on the same axis but facing in opposite directions