Recently, I came across spectacular pictures of solar granulation like this: 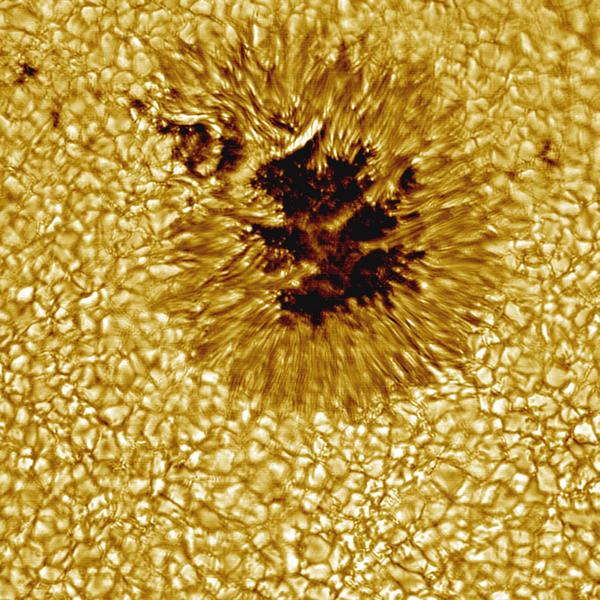 The photograph is impressive because it has a resolution of less than 0.1 arc seconds, which corresponds to about 50 km.

I wonder whether this is in contradiction with the standard solar model that assumes a thickness of the photosphere of about 300 kilometers. After all, it's the whole photosphere that emits the light.

How can the sum of fast and highly turbulent processes, with a vertical extension of several hundred kilometers, result in a picture with a spatial resolution of some tens of kilometers?

There have been claims by a non-mainstream researcher, Pierre-Marie Robitaille, that the sun consists of liquid metallic hydrogen, not a gas. Sounds exotic, but the granulation pictures seem to provide some evidence.

The resolution is much smaller than the granulation pattern. i.e. The granules are well resolved and are of order 500-1000 km in diameter, not 50 km. The sunspot is of order the diameter of the Earth.

Granulation is caused by convective cells rising and falling such that they just poke up into the bottom of the photosphere - i.e. that region where most of the continuum light comes from at around optical depths of 0.5-1. This is no coincidence as it is the escape of radiation that stifles the convective instability.

Trying to read between the lines I think what you are really asking is why can we see any spatial structure that is smaller than this? You use the term "resolution", but that is a property of the camera, not the Sun.

There are two reasons: (i) The argument on size scales above is an order of magnitude argument. Structure does occur on smaller scales - a spatial Fourier transform would show a dominant scale at 500-1000km, but turbulence cascades structure to smaller scales too. For instance lower pressure downflows could be squeezed between uprising cells. There are also magnetic fields threading the region that also play a role (seen clearly in the periphery of the sunspot). (ii) This is just a snapshot. If you were to average many pictures taken over a time longer than a few convective cell turnover times (the cells have peculiar velocities of order 1 km/s so turnover times of ~5 minutes) then the picture would be much more blurred.

The OP's concern appears to be mainly that they think any small scale structure in the picture should be washed out by turbulent motion and the absorption/re-emission of light in higher layers of the atmosphere. However, once granulation reaches an optical depth of about 2/3 then most of the light escapes directly with no further interaction with gas above it. The continuum itself is formed over a layer (a plane parallel approximation is a bit crude) which is much smaller than the size of the granulation cells (perhaps 100km vs 500-1000km).

Here is a time lapse movie taken at Big Bear observatory over a couple of hours, clearly showing the convective motions at the base of the photosphere.

Not the answer you're looking for? Browse other questions tagged astrophysics sun or ask your own question.