Why can we cycle faster than we can run? [duplicate]

But on the physical/biological level this doesn't seem obvious for me. To move we need to perform work on our mass. And for cycling there is an additional mass of the bike which should make it even slower.

So what causes the difference?

Of course I would like to discuss running/cycling on a flat terrain, as downslopes would be a something completely different.

It is all about the loss of energy during each stride - the tendons store some energy, but not a lot. A kangaroo and a greyhound, for example, have far more efficient elastic storage in their legs / tendons, allowing them to achieve (and maintain) greater speeds with less effort. Key phrase from the abstract in that reference:

There is a nice demonstration that this is so. Somebody invented pogo stilts which allow an average person to "run" at 20 mph. They don't became stronger when they put these on - they just become more efficient. This means that a larger fraction of the physical "work" done when wearing these is against the air drag - with lower losses in the motion of the muscles.

Note that the problem is not the up/down motion of the center of mass (although that contributes) - it's the fact that muscles have to stretch and contract under tension. When they move in a direction opposite to the force (when they do "negative work"), they don't store the energy. You know this is true - when you try running down a steep slope, it's hard work. But from a physics perspective, work is being done on you... yet you get tired.

By contrast in a bicycle there is just the pushing motion of the muscles ("positive work") - there is virtually no part of the motion where the muscle is pushing against a pedal going the other way (if you use proper technique). At the extreme case, you can roll along on you bicycle without pedaling for quite some time - there is no way to keep going for even a very short distance at walking speed without spending significant effort, since you have to keep moving your legs - and about half of that motion is "contraction".

An interesting article about "form" talks specifically about the issue of footstrike - what part of the foot you land on, and where that lands. It clearly identifies the need to land almost directly below the center of mass of the body - in other words, minimizing the "contraction" part of the stride.

Example of a good footstrike (source - Meb Keflezighi at the Boston Marathon): 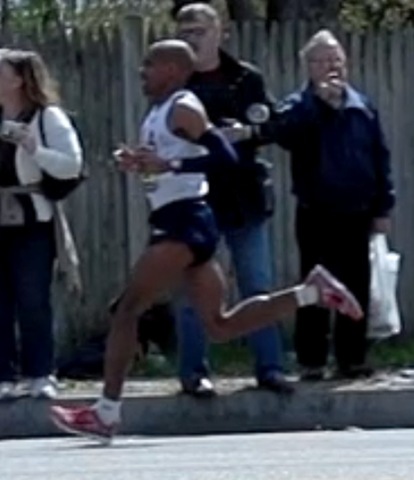 and bad footstrike (too far forward)source: 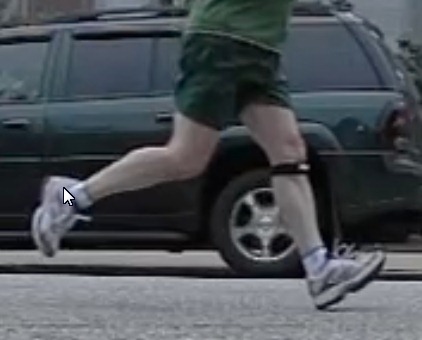 The inefficiency goes as $(1-\cos\theta)$ - that's the amount of movement that has to be absorbed. For small $\theta$ that scales with $\theta^2$, so overstriding quickly becomes a problem. Proponents of barefoot running claim that the padded heels on many modern running shoes are fueling this "bad" style because it doesn't hurt to run badly - you just do a lot of work, and go slowly. And the shocks eventually get to your joints.

This would be perhaps better off as a comment, but my reputation says I can't yet comment.

All the other answers get the physics aspect right, but there is more to it from the biology point of view which might help the total average: you can rest on a bicycle more effectively.

While when running, you generally need to do the running all the time, running downihll actually costs you some more energy (in damping which is not conservative, as described nicely in @Floris' answer).

faster long-distance runners hit ~20 km/h (marathon records) while fastest cyclists can do ~40 km/h So what causes the difference?

That is the main negative factor, than you must consider the positive factors of running a bike: you use more mucles of your body, and exploit gravity and the force of inertia. 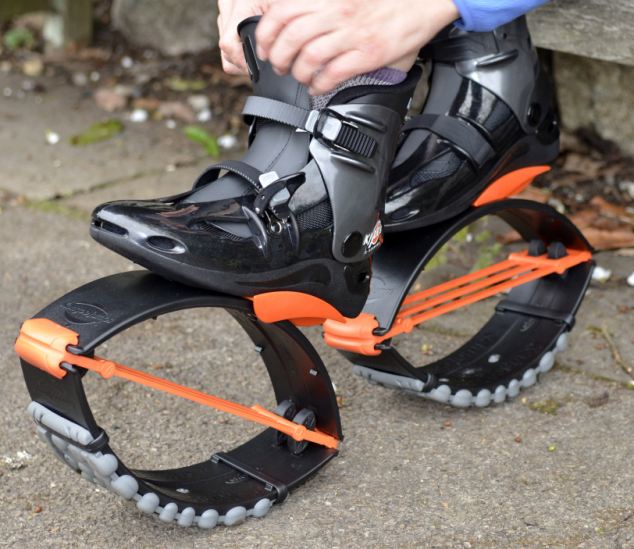 This applies on all grounds, but if we also consider a roller-coaster path: when you go uphill you waste energy fighting against gravity, but when you go downhill your speed is not greatly affected. If you ride a bicycle you can store potential energy in the system and you can exploit the force of gravity to build up a huge acceleration and reach very high speeds indeed

I imagine you are getting the benefit of the mechanical advantage of the bike's gearing. On top of that you have less resistance between the tire and the road surface. I think those two will account for most of the difference.

As you say, "to move we need to perform work on our mass". The work we produce, however, is not the limiting factor when we run. It is how efficiently we convert work to forward motion. The bicycle - by design - is a more efficient device to achieve this than only our legs. The deficiencies of running are outlined in Floris' answer.

This is a matter of efficiency:

If you are seated in your bike, all the energy your legs can produce is converted in movement (well, obviously always there is a waste of energy, let's keep thermodynamics on).

When biking you use your arms to control the front wheel, which control the direction and keeps you in vertical position with small movements, but your legs just work to keep you on movement. So you need less energy to maintain during hours a decent speed (20km/h is very affordable) and you can focus all your power to get a very high speed in a sprint (professional bikers can get about 70km/h). In those sprints you are pushing down with one leg, pulling up with the other leg, and even using your arms to stop your body going up (is like you want to be heavier to push harder).

The statement "To move we need to perform work on our mass" is false and misleading.

We need to perform work in order to accelerate our mass, and we need to perform work to overcome various resistance forces, but in general things can move an arbitrarily large distance with arbitrarily small amounts of work. Top speed is determined by resistances (e.g. air) that increase with the speed, where the amount of force you're able to put into acceleration (not movement) is matched by the resistance.

Look at ice-skating, not cycling

Cycling is rather different in multiple aspects, but perhaps a comparison with ice skating is more effective. In ice skating you're performing very similar movements to running, and can achieve much greater speeds - say, 40+ km/h sustained over a distance of 10km.

If you're not wasting effort on bouncing your weight up and down, then the actual resistance (the neccessary or useful part of the work) is not that high, and you can achieve much better results - ice skating, rollerblades, bicycles, skiing are all ways of achieving forward movement with less energy wasted on jumping up/down at every step.

I would venture to say that if you would notice that it takes longer to build up momentum on a bike as opposed to running, this is because energy needs time to store in the wheels due to the wider circumference they have over the cycles we make with our peddling (which is roughly equal to the steps we make while running) and for every cycle our peddle makes is equal to 1 cycle of the wheel thus covering more distance, after desired velocity is gained we find our peddling is just keeping up with the wheels. of course I realize that my description is only accurate in principle but in technicality the gears on the back wheels are actually smaller circles than the peddles so they can complete more cycles then the peddles do to a shorter distances in circumference; and it is then the much larger wheels have to keep up with the spin of the gears in turn.

Not the answer you're looking for? Browse other questions tagged work biology or ask your own question.

86
What makes running so much less energy-efficient than bicycling?
1
Can $F=ma$ be used to calculate ground reaction force of someone walking/running?
0
Why is it easier to ride a bicycle than to run?

1
Can endergonic reactions occur outside of living organisms?
1
How much energy does it take to simply run forward?
1
Energy density and Carnot cycle
0
First law for a closed system undergoing a cycle
0
Where heat goes in and out for a thermodynamic cycle? (ideal cycle and cycles in general)
6
Why do cones require more light than rods?
1
Why does hair dry faster when I have less hair?
0
Work in Rankine Cycle