Why doesn't a tied balloon behave like a pendulum?

It is well known that a tied weight will oscilate under the effect of gravity if left from aside, like a pendulum. However, if we tie a helium balloon to the ground from and left it form the floor (not exactly from where it is tied, but from a side) it will go upwards until the string is not loose without oscilation.

Why is this like that? How is the force of the helium pulling up different from the gravity pulling down in the pendulum example?

Actually, it does behave exactly like a pendulum. The equations of motion are exactly the same. The issue, as Jasper pointed out, is damping. When you think of a "normal" pendulum, you are considering a lightly damped oscillator. The balloon, as I will prove below, is heavily damped.

For a damped harmonic oscillator (which a pendulum approaches for small deflections), the general equation is

Where $x$ is displacement, $m$ is the mass, $\mu$ is the drag coefficient, and $k$ is the "spring" coefficient.

Sometimes this equation is rewritten as

Where $\zeta$ is called the damping ratio, a dimensionless number. - more about that in a minute.

The solution to this equation depends on the degree of damping (the magnitude of $\zeta$). It is easy to see that

We solve this by using a trial solution:

which is an equation with two (complex) roots:

When $\zeta \gt 1$ the roots are real, and the equation is that of an overdamped oscillator - meaning that it never oscillates, just slowly returns to the equilibrium position:

Since a helium filled ballon is "lighter than air" we can put an upper boundary on the estimate of the mass from the mass of an equivalent body of air. For a 25 cm diameter sphere, the volume is approximately 8 liters, so the mass is < 8 gram (1 kg / cubic meter is a nice approximation of the density of air: it's a little higher, but we are estimating here).

Next, we note that a sphere moving through a medium has an apparent inertia that is its own inertia plus half the inertia of the displaced medium, so we add 4 grams for $m=12 \text{g}$ - except that since the balloon is lighter than air we will say it is $10\text{ g}$ and allow for a tension in the string of $2\text{ g} = 0.02\ N$ (we will assume massless string…)

The drag coefficient of a sphere in air is a function of the Reynolds number. If the sphere moves at 10 cm/s, we compute

This means the coefficient of drag is 0.43, and the drag force given by

this is not linear with velocity, so we need to make a further approximation that the average velocity of the sphere during its motion is 5 cm/sec - then we can compute $\zeta$ as

Now we need to convert the effective buoyancy to a "spring constant", using the small angle approximation.

For a pendulum of length $l$ and (small) deflection $x$,

So yes - $\zeta \gt 1$ which we set out to prove (quod erat demonstrandum). We conclude this is a heavily damped system, and the solution is a slow return to the equilibrium position without oscillation.

And that is your explanation.

The balloon has a very small mass and friction is large (large surface area), so the oscillation is very damped.

Tied balloons do behave like a pendulum, you only need really massive ones: 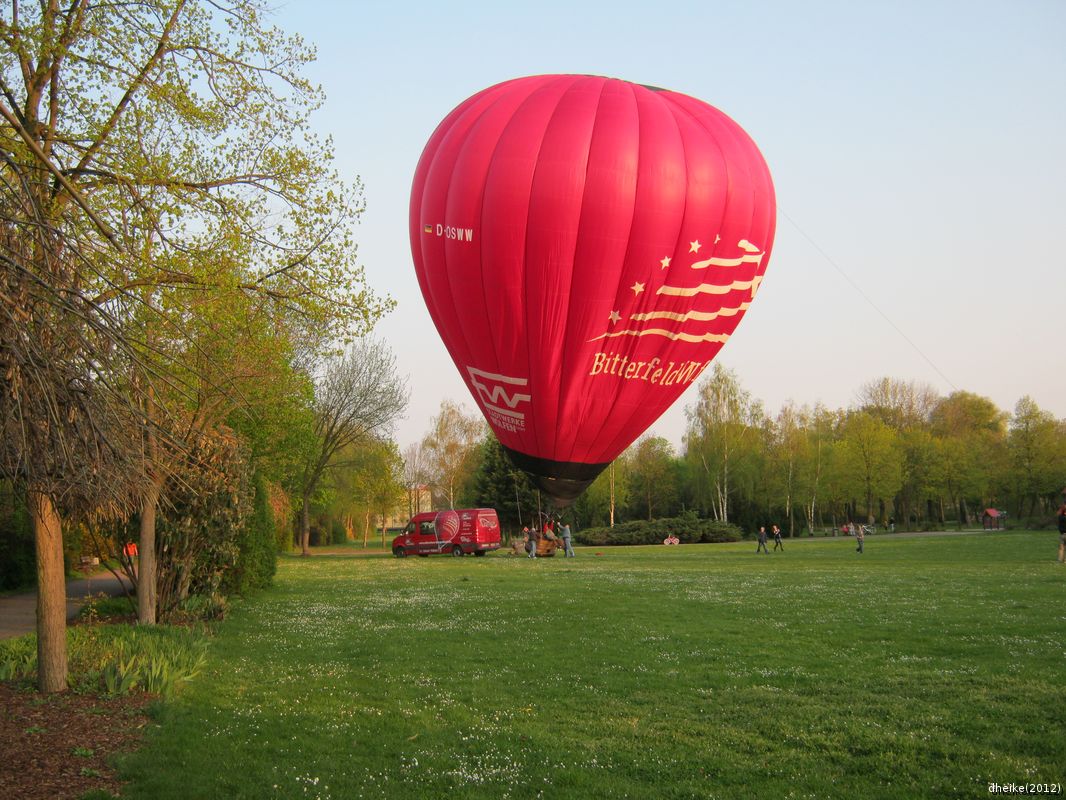 You can see it live in a video.

Hot air balloons have such a big amount of..erm...hot air that during the start you can expect oscillations because while the surface area is big, the mass inside is so big that the dampening is low enough. They are not exactly like a pendulum because the hot air can move freely (and mixes with colder air inside), but you can see that it is definitely oscillating.

To answer counterarguments: Hot air balloons are mostly started with very low wind speed which is nearly calm at the ground, so it is not the wind. And the oscillating does also happen if the burner is shut off.

It seems like you're are looking for an opposite of a gravity-driven pendulum by using buoyancy. But pendulums don't work using buoyancy, so the opposite could never apply. Still, if you want to see a balloon oscillate like a pendulum, you could tie a balloon to an anchor, surround it with a vacuum to eliminate drag, give it a strong static electric charge, and place an oppositely-charged very wide plate above it. The balloon will feel an upward pull similarly to how it feels a downward pull from gravity. If this experiment is done where the electrical attraction is stronger than gravity, then you will have a pendulum that looks like it is driven by gravitational repulsion. You should keep the plate far away from the pendulum so the electric field strength remains rather constant regardless of the balloon's varying height during its oscillations.

Not the answer you're looking for? Browse other questions tagged newtonian-mechanics drag oscillators buoyancy or ask your own question.

-1
Determine velocity of balloon from known Buoyancy, mass and surface

0
Calculate the stable height of a balloon
0
At what point of a pendulum's swing is its acceleration the greatest?
1
What happen when a helium balloon is floating inside a moving train?
6
Can gravity be better described as buoyancy in spacetime than a pulling force?
57
When a balloon pops and lets a brick fall, where does the energy come from?
0
Does the mass of a pendulum string affect the amount of force required to hold it at a specific location?