Why won't the efficiency of a heat pump increase when $T_\mathrm{cold}$ decreases?

Why won't the efficiency of a heat pump increase when $T_\mathrm{cold}$ decreases?

In the carnot cycle, efficiency increases when $T_\mathrm{cold}$ gets colder and $T_\mathrm{hot}$ gets hotter. Are these statements reversed in a heat pump cycle?

It's pretty much as you say. But it sounds as though you're trying to guess. I'd suggest a couple of little sketches and some first principles reasoning; see my drawing below 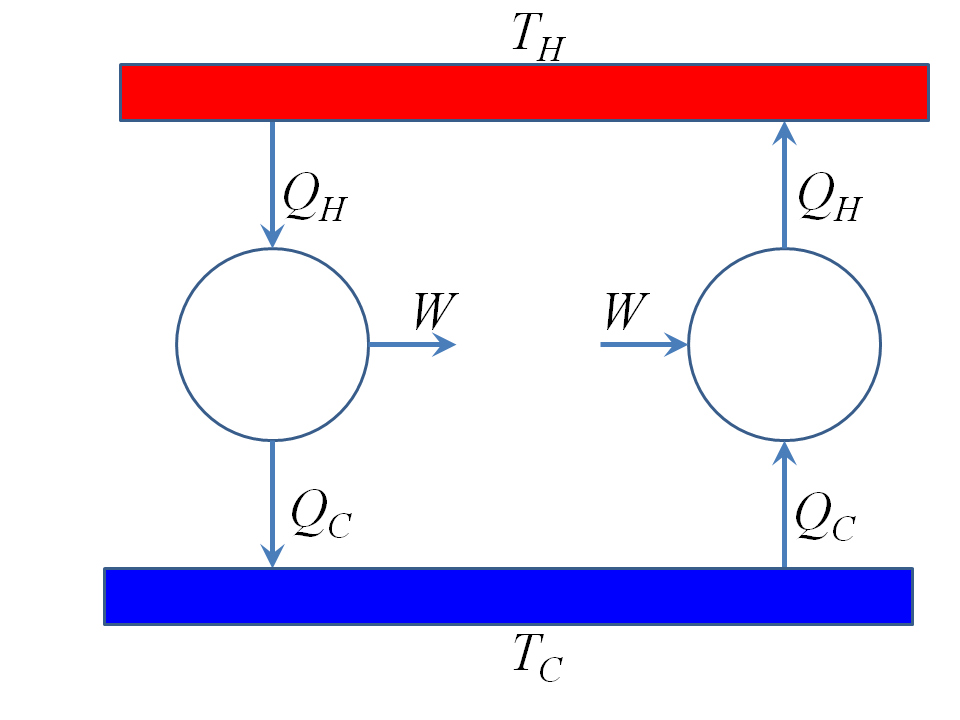 Both the circles are my reversible heat engine. On the left, it is running "forwards" and yielding work $W$ from the nett flow $Q_C$ into the cold reservoir at temperature $T_C$ after extracting heat $Q_H$ from the hot reservoir at temperature $T_C$. On the right it has work $W$ done on it for a nett flow nett flow $Q_C$ out from the cold reservoir, and the total $Q_H=Q+Q_C$ is pumped into the hot reservoir. By definition of the thermodynamic temperature in terms of heat flow ratios in reversible heat engines, as I discuss in my answer here, then

and, by energy balance

The engine is reversible, so that all the magnitudes of the energy quantities are the same; their signs are opposite: instead of the heat engine doing work $W=Q_H-Q_C$, we must do work on the heat engine to pump $Q_C$ from the cold reservoir and thereafter dump the total energy $Q_H=W+Q_C$ back into the hot reservoir.

So you now work out both efficiencies from (1) and (2): for the heat pump, a sensible "efficiency" is the fraction of the heat drawn from the hot reservoir that we convert into work; from (1) and (2) it is:

For a heat pump, a sensible definition of "efficiency" is how much heat $Q_C$ we draw out of the cold reservoir for input of unit work: this ratio is:

although this one is a bit weird insofar that it can be greater than 1. Note that it becomes infinite as $T_C\to T_H$: heat can move spontaneously without work input between two reservoirs of the same temperature (although for a finite reservoir, the flow would lead to a temperature difference and halt the flow). A better word, which I believe heat pump engineers use is "co-efficient of performance": the bigger it is, the less energy you need to put in to remove unit heat from the cold reservoir.

Do you mean efficiency or coefficient of performance (COP). The latter is the ratio of power needed vs amount of heat transported - and that is the more interesting value for heat pumps. The smaller the gradient against which you pump heat, the less energy you have to add. Think of it as "carrying particles of heat up a hill". If the hill is tall, you have to put in a lot of work to carry them all the way to the top. Not the same thing as Carnot efficiency (which describes the amount of work that can be extracted from a temperature difference).