Why should I believe that "elementary" particles are indeed elementary?

I had always assumed that it must only be a matter of time until the particles that quarks and other elementary particles are made of are found, but recently I ran into a physicist at a party who to my great surprise told me that scientists aren't looking very hard for such particles because there is a theoretical justification to strongly believe that yes, this time we really have reached the bottom of the ladder and the reason we have not discovered any constituents of elementary particles is that they have none.

Unfortunately, our conversation was interrupted at this point and I didn't see the guy again afterward. Needless to say, I'm now burning with curiosity for the "theoretical justification" that will make me believe science indeed has closed that chapter. Can anyone here enlighten me?

At the moment the grand majority of data in particle physics is modeled extremely well by the standard model which also has been able to predict new phenomena. The most recent success is the discovery of the Higgs meson at the LHC at CERN. The particles in the table are called elementary, because they are enough to explain the complexity we observe in matter and its behavior. 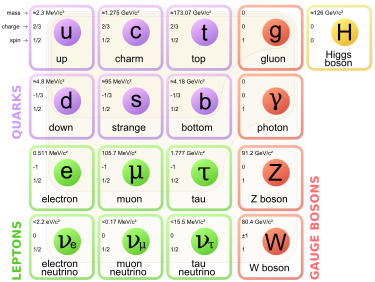 The Standard Model of elementary particles, with the three generations of matter, gauge bosons in the fourth column, and the Higgs boson in the fifth.

Any new theory of particle physics will have to show that it can embed the standard model in its structure. From the current theories, whose direction goes towards a unifying model of all four forces, i.e. including quantization of gravity, the dominant proposal is a string theory based model. In string theory, all the particles in the table above are no longer fundamental to the theory, but are excitations of a string. What becomes elementary is a string, and interactions happen between strings etc. etc.

It is a different way of formulating what "elementary" means, and what a level of "elementariness" ( not really levels of an onion or a matriuska doll series) means, but it stops the particles in the table above of being fundamental.

At the moment there is no experimental proof that string theory is the correct theory to use in modelling a theory of everything, other than that it can accomodate the standard model.

In conclusion, physics is not about beliefs, but about observations and mathematical models that fit these observations and predict new ones to test the model. At the moment there is no reason to change the level of "elementariness" as far as the data is concerned and experimentalists are open to the possibility .

There is a model that uses only two elementary particles (less there can´t be) and that´s the Rishon Model made up mainly by Haïm Harari (there are other preon models but I think this model is the most elegant one).
Rishons have an electric charge of 1/3 (the T-rishon) or 0 (the V-rishon), and by combining them you can construct all the known particles. It could also explain why a chargeless Z-particle can decay in three photons: it consists of three T-rishons and three anti-T-rishons. In this model, the weak force is a residue force. And for example, an up quark is a combination of three T-rishons and one V-rishons. You can find out for yourself how the other quarks and leptons are made up.

So in this model only four truly elementary particles are needed to make up all quarks and lepton. More economical it can't get! The force-carrying particles (the photon, the gluon, the hyper gluon, and maybe the graviton) are not accounted for in the Rishon Model. They are just there.

Of course, the theory has its flaws but doesn't every theory (model) has flaws?

I hope this answer gives you some enlightenment.