Imagine a non-magnetic tube bent into the shape of a triangle, with two sides forming downhill ramps, and the third side connecting the two ramps. Through this tube travels a metal ball, which is pulled back at the top with a magnet. When the ball gets back to the top, a small part of the energy generated by falling (or a pin and spring) is used to insert and remove a strip of some antimagnetic material (if that exists), causing the ball to repeat the cycle. The image below is a diagram of the machine. 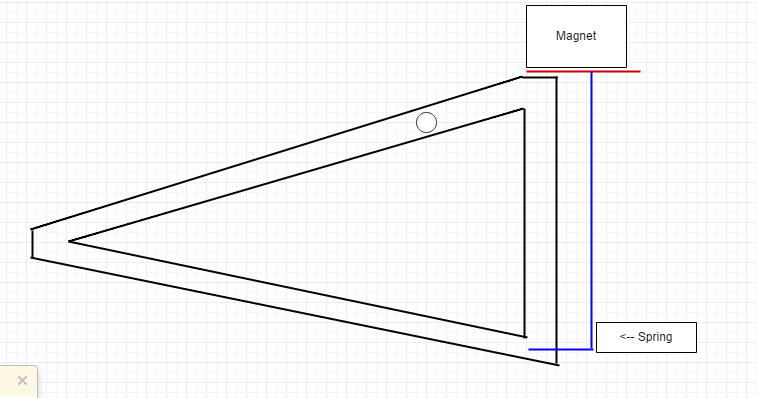 Why doesn't this work?

The key here is the antimagnetic strip, quite aside from whether or not such a device can be built.

You can, in principle, recover some of the ball's kinetic energy as it hits the ground to help do some of this nett work on the antimagnetic strip by the schematic "tredle" device you show linked to the magnet. However, this is the point at which rob's answer comes in: you might make a lovely art piece that runs for a while, but, if there is any energy loss, anywhere, the machine will stop eventually.

Turning your question around: the ultimate "reason" is that we have never experimentally observed a nonconservation of energy. By experimental induction, therefore, we postulate a principle of conservation of energy and thus the machine cannot work. However, if so, then a theorist can work out what kinds of properties of an antimagnetic strip are physically plausible: only those properties which would demand a net input of energy in the way I describe in my answer are plausible i.e. consistent with overwhelming experimental evidence.

There is a confusion between the terminology "perpetual" , which means "continuously", devices that almost move forever, and a machine that can produce energy. As the other answers point out energy is conserved and if it looks as if energy is provided from nothing a closer analysis shows the mistake, as in the drinking bird perpetual setup. In the case of the bird it is a small heat engine

An analysis showed that the evaporative heat flux driving a small bird was about half a watt, ......The system efficiency is about 0.01%. More practically, about 1⁄1000000 of a watt can be extracted from the bird, either with a coil-magnet setup or a ratchet used to winch paperclips.

In your particular setup there does exist a magnetic field obstructing metal called mu-metal. You would have to rotate a screen in just before the magnet picks up the ball. Then you have to rotate the screen out when the ball reaches the angle at left after being kicked by the spring ( which I suppose it is at an angle). This eats up energy and the spring will eat up energy . If engineered carefully it might work for some time , until the magnet demagnetizes, because it is the magnetic field that supplies the energy to lift the ball up that is recovered by the fall. I suspect that the efficiency of such an engine, i.e. if you try to extract energy, will be even smaller then with the perpetual bird. Particularly as you would need some electronics to rotate the screen in before the ball sticks to the magnet , .

Too many abrupt changes in direction. Also, is this spring powered? If so, I would think it to be simpler by using an electromagnet to apply and cut voltage. More moving parts mean more opportunities of failure.