What does it mean to have two phase coherent signals at different frequencies?

Just as the title states, I don't understand what it means to have two different signals that are phase coherent but are at different frequencies.

I am attempting to implement a MSK modulator in octave based on an article in the IEEE Communications Magazine, "Minimum Shift Keying: A Spectrally Efficient Modulation" by Subbarayan Pasupathy. At the beginning of the modulator the description reads "The multiplier produces two phase coherent signals at frequencies $f+$ and $f-$." Those frequencies are 1200Hz and 1800Hz for my application.

Hobbs answer is accurate. I just want to point out that "phase-coherent" is a confusing term because what should be said is they are phase-continuous at the symbol rate. This means that as one tone is switched to the other there are no phase jumps and the wave form is continuous like in this example. 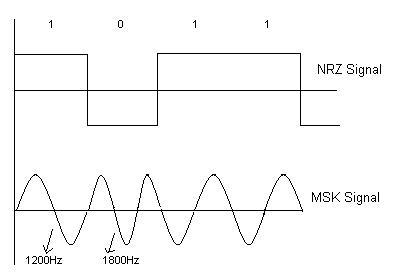 You can see your two different rates 1800 and 1200 and how at the symbol rate of 1 or 0 transitions their phase is continuous. As has been stated the two signals have to be rates that are integer multiples for their phases to over lap consistently with a fixed time interval.

They're phase-coherent with respect to the symbol rate. Suppose you're doing conventional coherent FSK with 1200Hz and 1800Hz tones, and 600 symbols per second. A switch can instantaneously connect either tone to the output, and the tones are continuous (they keep their phase even when they're not being output). Start a symbol at an instant when the 1200Hz and the 1800Hz tones are both crossing zero in the positive direction. 1/600 of a second later, the 1200Hz tone will have completed two full cycles, the 1800Hz tone will have completed three full cycles, and both will be crossing zero in the positive direction again. At that moment you can switch to the other tone without a glitch in phase.

My understanding of MSK is weaker, but I understand that it does something similar where the baud rate is double the frequency difference, so 1200 symbols/s in this example. Then the 1200Hz tone goes through 1 cycle and the 1800Hz tone goes through 1.5 cycles. If you start in the same condition as before, then both will return to 0 in time for the next symbol, but they will be going in opposite directions, so switching from one tone to the other gives continuous phase but a phase reversal. Somehow (I haven't followed this myself yet) the half-sinusoidal shaping of the bits gives a waveform with no sudden phase reversals.

4
How does phase modulation conspire to eliminate power variations?
0
What should the cross-correlation of two signals look like if their difference is non-significant?
0
What does the phase discriminator portion of the Costas Receiver do mathematically?