I was just thinking about how deuterium and tritium are charged particles and so I couldn't help but wonder why we don't use the same process used in the LHC(electromagnetic fields to accelerate particles) for nuclear fusion?

Oh, but we do! I'm assuming you mean using the fields to simply collide particles with each other, right? Then that's already being done. For example, take this neat little machine: http://en.wikipedia.org/wiki/Fusor This one runs on the exact same principle you described (though I'm not quite familiar with the inner workings of the LHC).

For energy generation, most current approaches to nuclear fusion here in Europe heat up those exact particles to high temperatures, making them collide into each other due to their high kinetic energies, and then use magnetic fields to steer the particles (en masse in the form of plasma) to keep it confined, to keep it from running into the walls, damaging them and cooling themselves down. It's really hard to execute in practice for now, but we're getting there with projects like JET and ITER. Here you go for some further reading: http://en.wikipedia.org/wiki/Magnetic_confinement_fusion

The energy per proton at the LHC is much larger than what is needed for fusion, protons break up into their constituents easily at this energy and fly away after they interact. In a fusion reactor, one wants the particles to stay within the reactor volume such that the released energy can be transferred to other deuterium/tritium nuclei which then can interact etc.

The beams of the LHC have a typical diameter of 0.05 mm, much too small for a practical fusion reactor (also a lot of energy goes into cooling the bending and focusing magnets to keep the size of the beam so small).

The corresponding section on Wikipedia points out that:

The key problem with accelerator-based fusion (and with cold targets in general) is that fusion cross sections are many orders of magnitude lower than Coulomb interaction cross sections. Therefore the vast majority of ions end up expending their energy on bremsstrahlung and ionization of atoms of the target.

Number of particles: A typical number of protons per LHC beam is $3 \cdot 10^{14}$, which isn't much compared to the number of particles in one mole ($6 \cdot 10^{23}$, about two billions larger). Even with one of the most intense proton beams available today (see also https://physics.stackexchange.com/a/77999/671), at 2.2 mA, this would correspond to about $10^{16}$ particles shot on target per second, taking about $10^7$ seconds (115 days) to shoot a mole on a target. This is much too large compared to typical time scales at which fusion processes occur.

I think fusion can be attained using magnetic fields.
I have proposed an open source idea several years ago to accomplish the task which can be seen by following this link
The plasma container can be seen below. 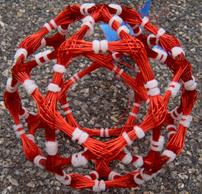 I think a sphere is superior to a torus for containing plasma.
My argument is as follows: Too much energy is lost in a torus to sustain fusion because the plasma is stretched out around the torus shaped container. A sphere is better because it's a more compact shape. Think electric motor where the coils make up the stator and the plasma is the rotor. Now imagine a rotor that can roll, pitch, and yaw all at the same time. Now consider the secondary magnetic field induced in the plasma as it rotates and it cuts across magnetic field lines produced by the coils. The plasma will also cut across it's own magnetic field lines as it rotates in three different axes. This is what compresses the plasma (think ball lightning). The shape of the magnetic field generated by the coils depends on how you energize them. The possibilities are infinite.  Current can go in either direction around each of 6 coils. Think of the current you put in as signal. The wave form, frequency, and phasing of the current going into each coil and the magnetic interactions between them will determine the shape of the resultant magnetic field and how it changes.

I made a paper model that shows only one the the infinite possible magnetic fields that could be induced by the coils. 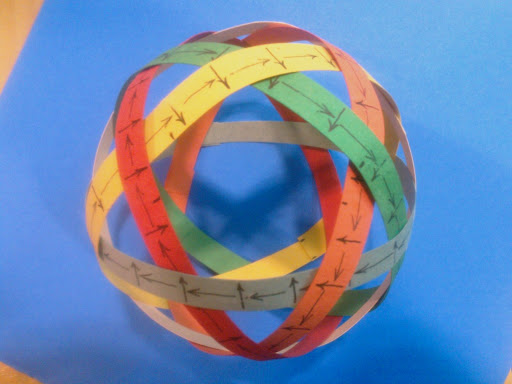 Here it can be seen from a different view for more clarity. 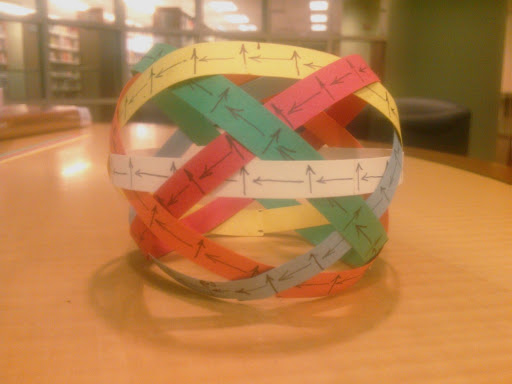 Modeling what happens in the plasma would require a computer simulation or you could just build one and watch what happens as signal is varied. It occurs to me to mention that the six channels of signal might be generated by a computer and then fed into powerful audio amplifiers or similar devices. The output of the amplifiers feed the coils which moves the plasma. In this sense imagining how speakers are moved by magnetic coils is a good starting point for imagining how plasma might be moved and or shaped by a device like this.

As seen below, several of these devices could be put together.
In this way several plasma charges could be generated and then sent into the center. 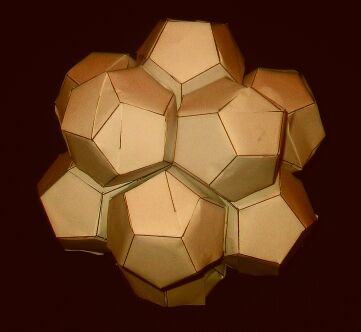 Below we see several of these devices put together to make a track that reminds us of the DNA molecule. The paper models make it clear that magnetic fields can be induced that would push the plasma around the track - maybe to collide with plasma going in the opposite direction or maybe to cause multiaxis rotation in the plasma.

While the ideas presented here are somewhat unconventional and to some quite laughable, I point them out here simply to say that we need to start playing with many ideas if we humans are to achieve fusion power. We have been making the same old thing bigger for decades. And for decades we have been hearing that fusion is right around the corner. This thinking makes a lot of money for builders and scientists for sure but does not necessarily make fusion. Thomas Edison came up with the light bulb by trying hundreds of different filaments until he found one that worked. He had no idea what would finally work so he tried everything. That's what we need to do - try a lot of different ideas as quickly as possible. Same old same old is not working.

Not the answer you're looking for? Browse other questions tagged large-hadron-collider fusion or ask your own question.

6
What are the strongest sources of collimated neutrons and protons?

6
Fusion: Why deuterium and tritium?
2
Questions regarding the feasibility of “Jupiter”-like fusion reactor
5
How would the explosion from a Pure Fusion Bomb differ from the explosion from a Fission Nuclear Bomb?
1
Could atmospheric muons be used to catalyze nuclear fusion?