Equation of motion for system of springs

I need to find the equations of motion for the following system. 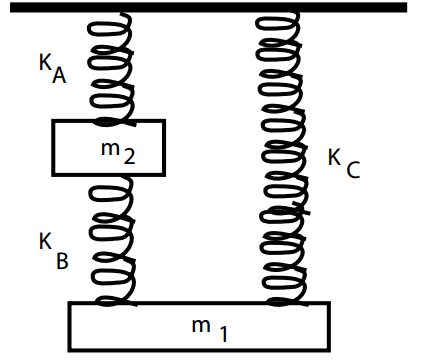 But sadly, this isn't correct as this gives all 0 normal modes. Any help on where I went wrong would be really appreciated.

Too long for a comment, so in an answer:

For spring A, the value of $x_{top}$ is fixed, so the spring force of A is a function of $x_{bottom}$ only, or in this case $x_2$. A similar reasoning can be applied to spring C, which only has a variable $x_{bottom}$, which is $x_1$. However, spring B has a moving $x_{top}$ and $x_{bottom}$, thus making this spring force a function of $x_2$ and $x_1$. You did recognize for your second equation, but failed to do so with the first equation. I have the feeling your making a mistake with positive and negative distances. Try to keep your coordinates consistent, and when in doubt, sanity check for physics. If, for example a mass moves, which direction will the spring force act? This is determined by the sign of the force in your equation.

Not the answer you're looking for? Browse other questions tagged homework-and-exercises newtonian-mechanics classical-mechanics waves spring or ask your own question.