Observing a particle over a certain domain

I was just thinking: in Quantum Mechanics, we start out with that whole collapsing business by observing the x position of a particle. I was thinking: why do we have to do that? What if we only observe a particle over a specific domain? Let's be more specific. I have an electron trapped in a tube. This tube has very, very thin walls. The potential in these walls is quite large but not infinite. Therefore, there is a probability the particle will quantum tunnel through these walls to the outside. If we let the particle go in the tunnel and wait a short time, this is the sort of wave function we would expect: (or should I say, the wave function's probability distribution) 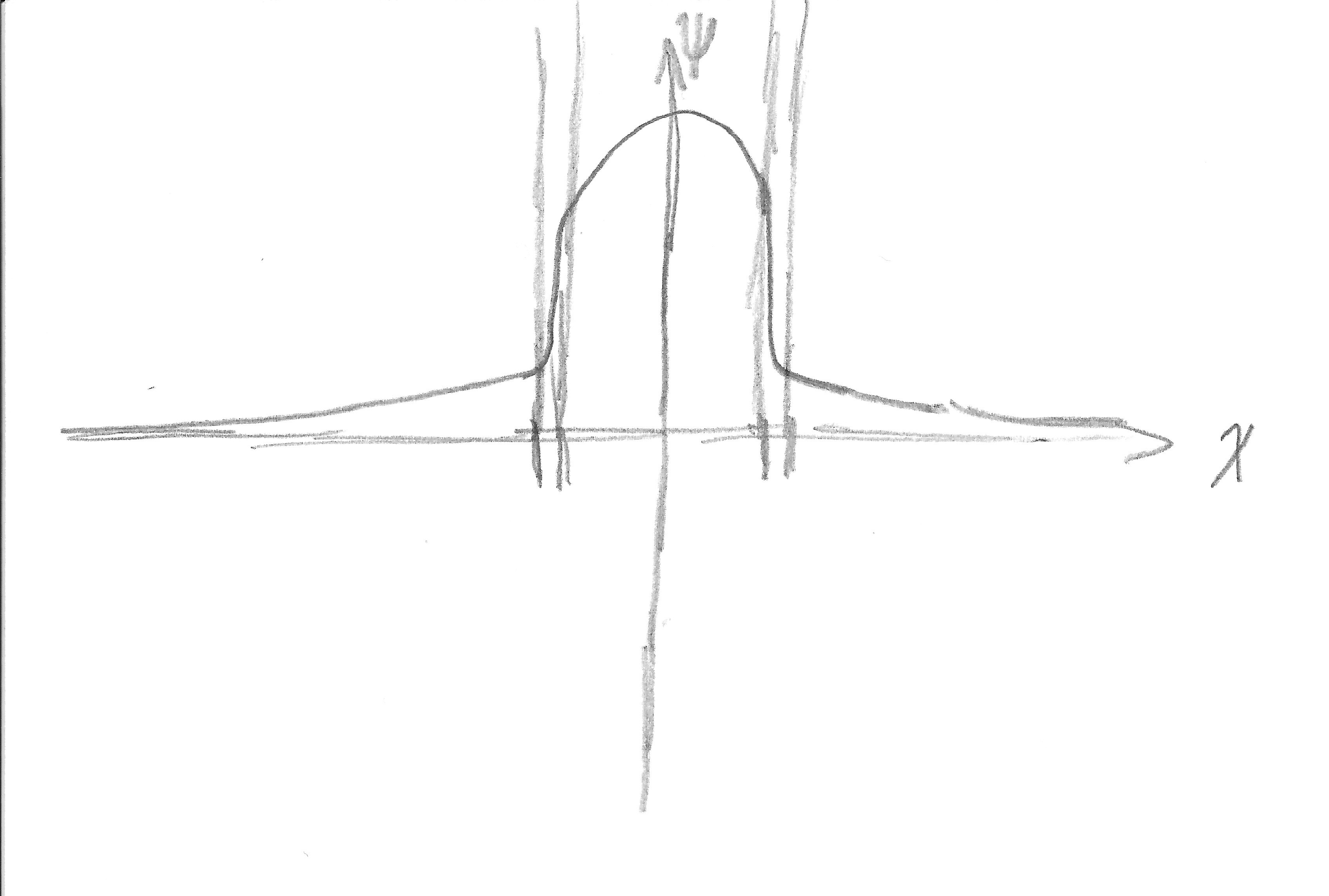 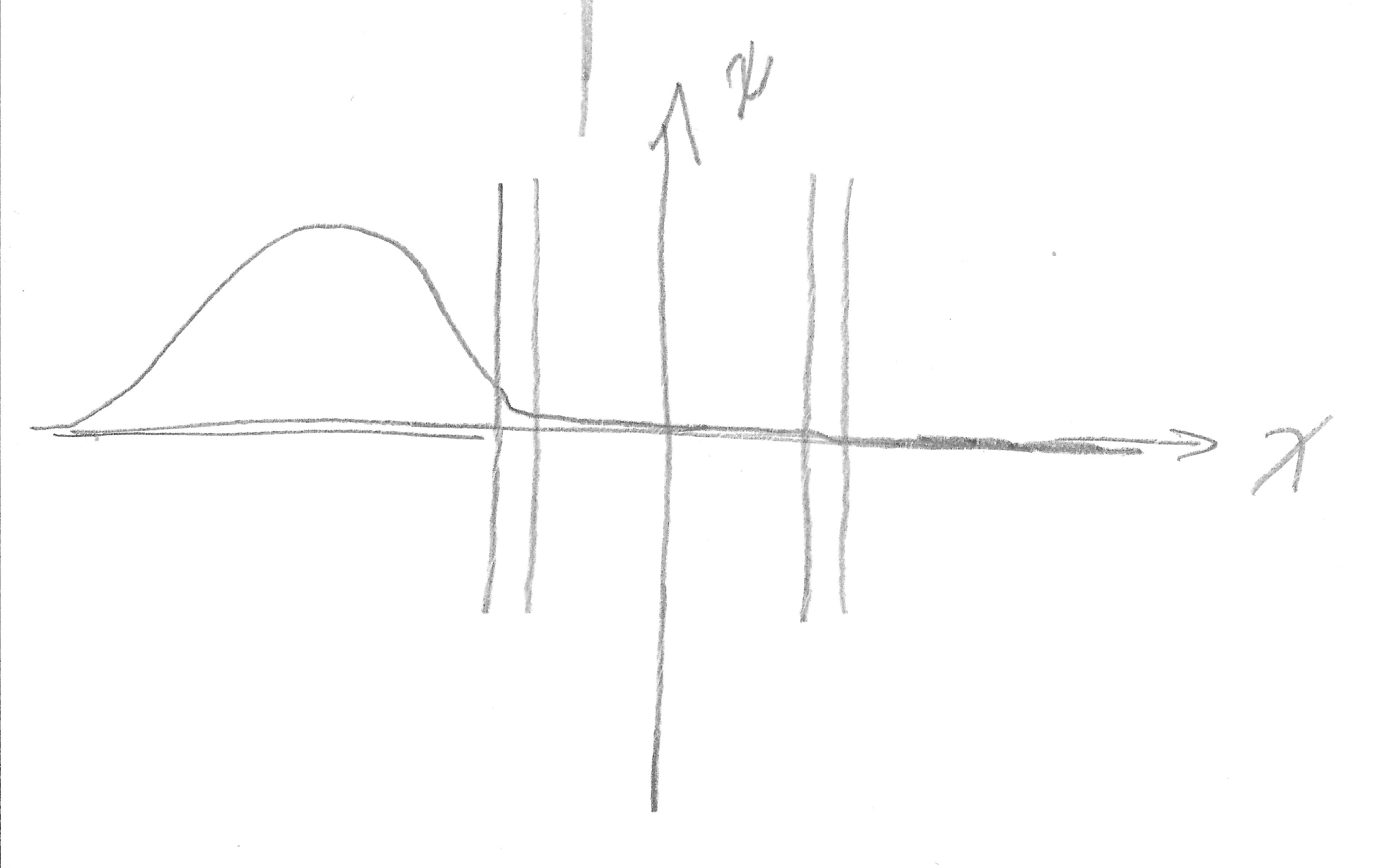 You cannot measure "where the particle is not at" in this way.

When you send a photon it either interacts with the electron, collapsing its wave function, or it doesn't.

If it interacts with the electron, then you can say, with some certainty related to the photon energy, where the electron was.

But if not, there's nothing you can say about it. It does not mean the electron is outside just that the particles did not interact, for some reason.

For example, a photon will never interact with the ground electron in a Hydrogen atom if it does not have at least 13.6 eV. Doesn't mean it is not there.

By the way, this "pipe' of yours is about the same as the Hydrogen atom example, the walls are like the binding forces between the nucleus and the electron, and likewise it has specific energy levels permitted for the electron.

You could argue that, "ok, but my photon has the required energy and any other quantum number required for the interaction", then comes in that probability distribution you drew. When they interact, and only then, you will find the electron at some point within the tube with that probability, but the photon could still totally "miss" it. Don't forget the photon also has a wave associated with it, it is not everywhere within the tube with the same probability. (Or maybe it's because of the "intrinsic randomness of quantum mechanics". That one always works too. :)

But the fact is, when you get the photon "on the other side", it has not interacted with the electron, therefore it has not collapsed its wave function. But also, there's nothing you can say about where the electron is.

Furthermore, if there are two particles with similar wave functions (some probability for either to be in the tube), then we will collapse them both.

No. Quantum mechanical solutions are exact and deterministic. Their square determines completely the probabilities of observation and each solution has definite boundary conditions that generate it as a model for physical observations. So, 'similar wave functions" has no mathematical meaning , similar is different, as far as QM is concerned.

So, we set up a problem, your potential and electron in this case. This is described by a definite wave function , squared giving the probability of finding that electron in a certain (x,y,z,t) , even outside the walls. One electron, one measurement. For example a scatter with another electron, measuring both tracks would give the location of the vertex, which would be the location for this electron at that time. Scattering with a photon needs complicated photon detectors but the same holds: one measurement.

To get a probability distribution the experiment should be repeated enough times with different electrons to find the distribution in your plot.

If we didn't collapse the wave function in the first place, how could we know whether the particle was inside the tube or outside it?

I dislike this collapse business which makes beautiful mathematical structures sound like balloons. We only know what happens to one particle with one measurement at a time, and then get the distribution for a probability plot.

Meaning? We have to take many measurements with the same boundary conditions to be able to get the probability distribution. There may be need for measurements if the exercise requires it, but the question is not whether one needs a measurement. That is for the experimenter to decide.

Maybe you should read similar links to this to get some words to search for, that wills how that tunneling is a well defined phenomenon and even useful in applications of nanotechnology.

Not the answer you're looking for? Browse other questions tagged quantum-mechanics wavefunction-collapse or ask your own question.

53
What is the difference between a measurement and any other interaction in quantum mechanics?
0
Could the collapse of a wave function be used to determine whether an object has been detected?
2
Can quantum particles spread out over large distances?
1
Will a particle still be in a superposition state if unobserved from only the perspective of one observer?
4
Is wave function collapse non-local or local?
2
Wave function collapse without finding a particle
3
Can we think about a particle trapped in a potential well in terms of “quantum measurement”?
9
What time does the particle reach the screen in this thought experiment?