I am building large wind chimes out of ALUMINUM TUBES with a D2 at 73.41 hertz as the lowest and two other higher frequencies of A2 at 110 hertz and E3 at 164.8 hertz. I know how to find each length for each frequency respectively, but I need to know how to find what the optimal diameter would be for each frequency. I understand that as the desired frequency goes lower, the diameter needs to increase in order to get more surface area so that the fundamental remains louder than the partials. But I do not know at what rate the diameter should increase by for each change in frequency respectively. In particular as I said I am making a D2 at 73.41 and I need to know what diameter I need. I was thinking either a 5 or 6 inch diameter. But I would like to know why. And it needs to be strongly heard from at least 10 feet away without hearing the annoying partials that are produced from metal materials. Anyways, I would greatly appreciate any formulas as well as answers that directly relate with finding the required diameter. Thank you!

A number of factors influence the sound of a wind chime:

These last two points are really important - when you strike exactly in the middle, you will excite the odd modes (only) of the tube: by suspending the pipe at the node of the first harmonic, you can dampen the higher harmonics. You could even add some mass at that point to limit the higher harmonics.

Quite a nice analysis is found at http://www.vibrationdata.com/WindChimes.htm with plots of data at the linked paper http://www.vibrationdata.com/WC_waterfall_plots.pdf . This shows that higher modes can occur, but are typically dampened more quickly so that the "long tail" of the sound is the lowest (fundamental) frequency. However, the "tone" that you hear when the tube is first struck is the stronger (and more rapidly decaying) component. You can prove this to yourself by listening to the sound clips embedded in the above link, and figuring out on the piano what note you think you hear.

The vibration that you end up hearing in a wind chime is a transverse vibration (see above link: the longitudinal modes are of much higher frequency - plus when you strike the side of the tube you excite a transverse, not a longitudinal mode. The calculations confirm that transverse modes have the right frequency). Very roughly, the sound pressure will scale with amplitude of vibrations times the area of the tube - width times length. Note, however, that when you make the tube diameter greater, it becomes much more resistant to bending, so that the frequency will go up - by a lot. In fact for the same tube thickness, the bending moment goes as the square of the diameter while the mass increases with the diameter. This means that frequency will increase when you make the tube diameter larger. If you compensate by making it longer, this will further increase the sound intensity. At the same time, striking a heavier rod will result in a lower amplitude (although that depends on the relative mass of the striker and the tube).

So as a first approximation you could try to increase the diameter by the inverse square root of the frequency, and increase the length by the same amount. This should maintain the fundamental frequency and increase the sound pressure. It might also increase the reverberation time (since the energy stored will increase, I believe).

Lots to think about; hard to do the analysis accurately. Best to do a bunch of experiments and report back here with your results.

Have fun - even if the sound is not "balanced", wind chimes are beautiful. I suspect it will be harder to get a harmonious sound when you use different diameters / thicknesses of tubes for different parts of the chime; you might be better off playing around with the excitation (how far from a node you strike each tube) in order to balance the amplitudes. D2 is a pretty low note... you're likely to be drowning (at least initially) in the harmonics - unless, as I suggested above, you play around with weights to strengthen the fundamental and suppress the harmonics. For clarification, here I reproduce a few figures from the above link that show the first few bending modes: 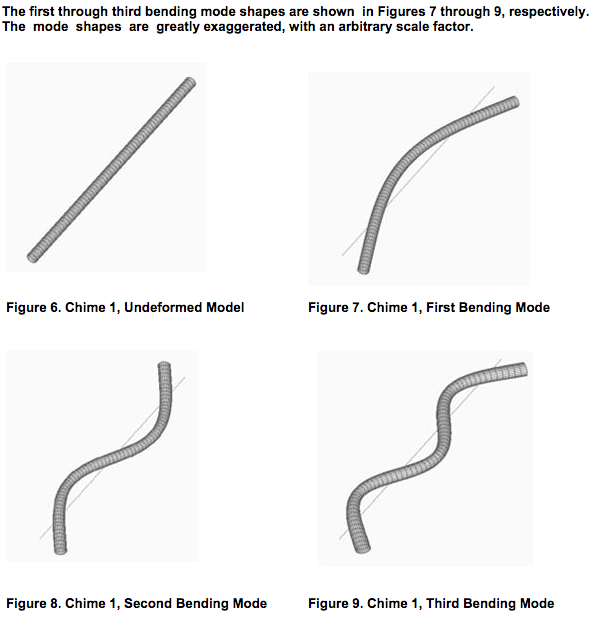 0
Pitch range and size of wind instrument
0
Frequency shift in case of wind and no relative motion between observer and source
0
Can thunderstrikes cause any form of wind
1
Is this true, the floor acts like one giant amplifier?
0
What causes wind like sound in glass (or in similar object)?
2
How does air flow within a melodica when two key are pressed?