Ask Question
Asked 7 years, 4 months ago
Active 7 years, 4 months ago
Viewed 722 times
1
$\begingroup$
This question already has answers here:
Sideways motion between a vertical launch from a planet and landing [duplicate] (1 answer)
Why does the atmosphere rotate along with the earth? (6 answers)
Closed 7 years ago.

Keeping all the above in perspective, Let’s say that a space craft reaches an altitude of 800 KM above the earth surface and is well outside the earth’s atmosphere. Now since the earth below is rotating, would the space craft be able to land in different places by just hovering above and making a straight vertical descent. This would eliminate all horizontal travel distance as done by the airplanes when traveling from one point to another. Once we are at 800 km above the earth surface, all that is needed is to wait for the appropriate time when as a result of rotation of the earth, your destination point passes right under you and you descent your space craft to your destination. Do you think that this could revolutionize travelling? Less fuel and less time by just taking advantage of the rotation of the earth?

I am also attaching a diagram to clarify my question. The Diagram shows the various layers of earth’ atmosphere. The Orange tube just shows the vertical descent I am talking about from Point A in outer space (say at 800 km above the surface of earth). The Yellow line is the Imaginary karman line at distance of 110 km which serves the boundary between the earth’s atmosphere and the region where the space begings.

Please comment if the idea is feasible and the areas where you see flaws in this theory. One possible argument that people can give in the opposition of the idea is :

“Motion is relative and that the earth’s atmosphere rotates with the same velocity as the earth itself and therefore our spacecraft in question would also be in same motion as the atmosphere” - Relative Motion Concept Please note that the relative motion concept would not apply in the case presented above because my assumption is that the space craft is no longer in earth’s atmosphere and is way beyond the karman line and cannot be considered as inside the earth’s atmosphere. The Space craft is 800 KM above the surface of the earth. Do you think that this idea of vertical travelling taking advantage of earth’s rotation is possible? Please comment. Your feedback would be greatly appreciated. 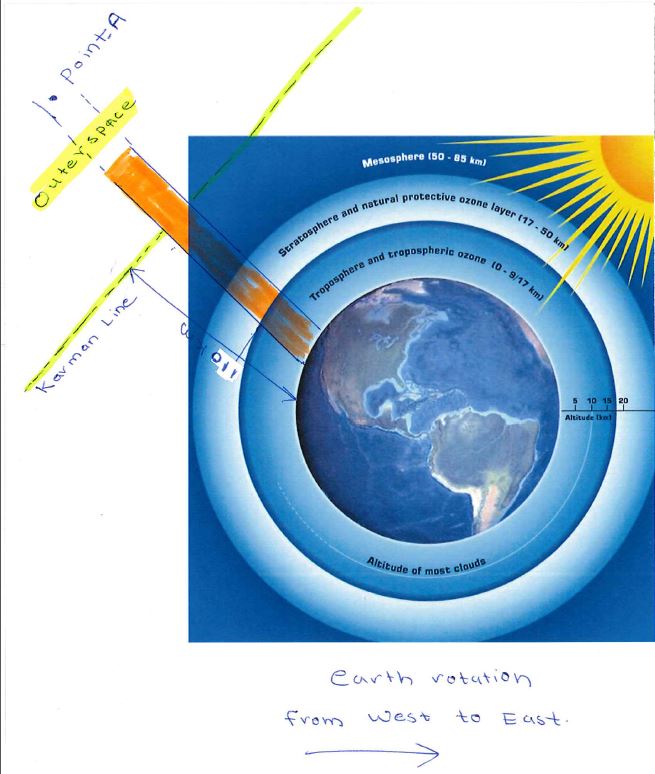 96
Why does the atmosphere rotate along with the earth?
2
Sideways motion between a vertical launch from a planet and landing

1
Coriolis Effect vs airplane
7
Earth's Kinetic energy change
3
How does a gyrocompass in a moving craft sense the Earth's rotation?
4
Earth's rotation in an empty universe
3
Will an object dropped from a high building displace due to the Earth's rotation?
0
Some concepts of circular motion between man and the Earth？
2
Understanding Euler's Rotation equation for rigid bodies (Frames Of Reference)
6
Actual astronomic latitude (direction of gravity) does not match calculations taking into account centrifugal force of earth