How to combat the black-body temperature of an object?

I'm trying to model the temperature of a large spacecraft for a space colony simulation game I'm working on. In another question, I checked my calculations for the steady-state black-body temperature of an object, considering only insolation and radiation, and it appears I'm on the right track.

My understanding is that this black-body temperature formula works only for passive bodies with no active heating or cooling. Now I want to add active heating and cooling elements. But how?

For cooling, I think I can model radiators as simply increasing the surface area of the craft, with no significant change to insolation (since radiators are placed edge-on to the sun). Please correct me if I'm wrong on that.

For heating, I'm stumped. I can increase the amount of energy dumped into the system, by presuming a nuclear reactor or beamed power or some such, but when I try that, the effect is much smaller than I would expect. I end up having to dump many MW of power into a large craft just to raise it up to room temperature.

So I'm wondering: does it matter how the extra energy is used within the system? Is a kW poured into a big electrical space heater going to get things hotter than a kW spent twirling a beanie, and if so, how?

As a possibly related question, it's claimed that the greenhouse effect significantly raises the temperature of a planet -- for example, Venus's black-body temperature would be 330 K, but due to atmospheric warming, its actual surface temperature is 740 K (*). How is this possible? Isn't it Q_out = Q_in, no matter what? And however this works for Venus, can we do the same thing to warm our spacecraft?

Interesting and complicated question. The things to consider:

"Black body radiation" assumes perfect absorption / radiation at all wavelengths. The greenhouse effect comes about from having absorption in the IR: the hot (short wavelength) radiation from the sun can penetrate the atmosphere, but the cooler earth radiates at a lower temperature - longer wavelength. And that longer wavelength light is reflected by the atmosphere (water, carbon dioxide, methane, etc). Think of the story of Winnie the Pooh visiting Rabbit's burrow. He goes in through the hole, has a "little smackerel" of honey (read: the whole pot), and then is too fat to get out again - commemorated on a postage stamp: 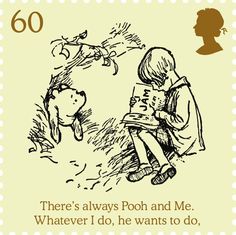 If you worry about your spaceship getting too cold (how big is it?) you should probably consider lowering its reflectivity - this directly scales with the heat loss. Notice how space ships are often "shiny metal". This isn't just because paint is expensive to lift into orbit (it is), but also to keep the emitted power down - keep the people inside protected from too much heat loss when not in the sun, and too much heat gain when they are. If you want to simulate the "Venus" effect you would want to create your own greenhouse effect - add a film that is transparent in the visible and opaque in the near IR.

Either way, your black body model needs to take account of the reflectivity as a function of wavelength - and instead of using the simple Stefan-Boltzmann law (which deals with total power per unit area), use the wavelength formulation (Planck law):

But yes - the amount of heat that a large object loses through radiation is substantial, even when it is at room temperature. There's a handy calculation on wolframalpha.com - it shows that the heat loss for an emissivity of 0.1 is still over $40 W/m^2$ at 298 K. The best thing you can do to insulate yourself is not let the outer shell get so hot in the first place - if you used a double shell, with the outer being thermally insulated from the inner, then you can see how this will lower the power emitted at the outer shell comes to equilibrium at some temperature $T_o$.

Assuming that the outer shell reflects half its power back to the inner shell, and half to the universe (which is so close to absolute zero that we ignore the difference), you can write

In other words - you halved it. If you add additional skins, the heat loss will be further reduced.

I must admit that I did that last bit of analysis "by the seat of my pants". It makes sense, intuitively, that the heat loss is reduced by a radiation shield; I have never attempted to come up with a number before, nor do I remember seeing this analysis. There could be a blooper in here - in which case I would be happy to have someone point it out.

I did find an online book that seemed to follow a similar approach but had a cylindrical geometry and uses different reflectivity on the inner and outer faces, which complicated matter further. But they show that multiple layers of shielding can significantly reduce these heat loads - which was really what I tried to say.

You can combat that the same way we avoid getting too cold: apply insulation. The outer surface of the spacecraft may be very cold, but that doesn't mean the internal temperature is that cold. That is what the greenhouse effect does-it insulates the surface from space.

Power dissipated inside the body all becomes heat. If you have solar arrays making power, all the power they make except for what you dump overboard (for example as radio broadcast or electrical thrusters) goes to heat the spacecraft.

How large a craft takes MW to keep warm? Today's communication satellites are running a few to 20 kW and staying room temp or so inside.

OK, I think I've got it, thanks to your comments above as well as this link, which shows how to calculate the temperature of a solar oven. (My situation is very similar to a solar oven, except that the power dumped inside the craft is electrical -- but watts are watts, right?)

So, I believe that what I need to do is:

This all makes sense to me, but I'm obviously no physicist. If anybody sees a mistake here, please let me know!

Not the answer you're looking for? Browse other questions tagged thermodynamics energy thermal-radiation blackbody or ask your own question.

2
Asymmetric heat conduction?
2
What's wrong with this temperature-in-space calculation?
0
Can an aluminized blanket hide a person from thermal cameras?

2
What's wrong with this temperature-in-space calculation?
0
Body that both cools (proportionally to temperature difference) and heats with constant power
2
How to estimate the maximum temperature between heating a cooling curve?
1
Temperature rising of solar collector
0
In-Vacuum Cooling Via Blackbody Radiation
3
Black body radiation and why do we see different colors?
0
What is $\varepsilon$ in black body curve formula?