Movement of a cylinder filled with water

Not long ago I was pretty bored at a dinner and I started playing with a water bottle that was not empty: I've been quite interested in its behavior when putted on its side and pushed: the bottle of course starts rolling, but its movement seems quite complex. I've been trying to obtain the equation governing this kind of system (an analytical solution would be nice too, but I have no idea if it can be found or not), but I really can't start.

Here is the model I use. I might have forgot to include some things, or maybe some assumptions are just wrong, so feel free to modify it if you think it can be improved. The following (awful) picture represents the initial situation. The only external force considered is the gravity $\vec{g}$ and it is uniform. 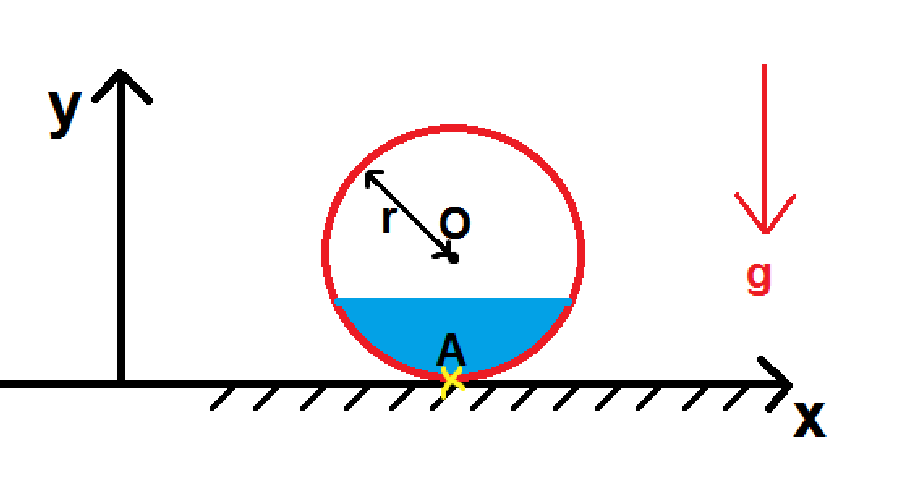 Modelisation of the bottle : I consider the bottle as an infinite rigid cylinder of radius $r$, so that the problem can be considered two-dimensional (side effects are neglected). The mass distribution of this cylinder / circle is uniform. When not a rest, it is rolling without slipping on the rigid horizontal floor: the point of contact between the cylinder and the floor, $A$, has always a zero velocity: $\vec{v_A} = \vec{0}$.

Modelisation of the water : Inside the cylinder there is a water (represented in blue on the picture) and air. I do not think that air really matters, so only the behavior of the water is to be studied.

The mass of the water is constant (the bottle is not leaking). We can assume that $r$ is more than a few millimeters, so that capillary effects can be neglected (as a consequence the free surface is initially horizontal). Water can be considered as an incompressible fluid, but I think that unfortunately viscosity has to be taken into account.

The movement : Now let's say we push the cylinder (or equivalently we states its acceleration) along the $x$ axis at $t=0$. What happens ? I would like to get the differential equation verified by $x_O(t)$ (the position of the center of cylinder).

I see two big issues: firstly the center of gravity of this system is always changing, and secondly it seems hard to find the force from the water acting on the cylinder. I actually really don't know how to start. How would you study this ?

I have three suggestions:

I would start with the third quasi-stationary regime (accelerating cylinder with water turning with it). It looks like it's the simplest. You could try to find out the minimum speed above which it is realised.

Not the answer you're looking for? Browse other questions tagged newtonian-mechanics classical-mechanics fluid-dynamics home-experiment or ask your own question.

45
Mechanics around a rail tank wagon
1
Rolling motion of an accelerated body
5
Water bottle rocket: Where does the energy go without water?
1
Why does a glass bottle completely filled with water not break when hit on a nail?
8
Does rolling friction increase speed of a wheel?