The TV show Mythbusters had an episode in which they interleaved two phone books and dramatized how hard it was to pull them apart. (A long time ago, a phone book was a book that had an index of phone numbers for everyone in your city. The trick apparently also works pretty well with reasonably thick magazines.) They ended up needing two tanks to pull the phone books apart against the resistance of friction:

When one of my students described this in class, it strongly violated my carefully cultivated intuition about friction, and I thought maybe the student was getting the description wrong. Actually it seems right.

Why does this work? I found the following online discussion from 2008, the same year in which the episode aired:

Posts 8, 27, and 36 seem the most relevant. 36 quotes the result of a calculation, without saying what the calculation was.

Can anyone give a good analysis?

A year has passed since this question was posed, and as luck would have it, this week a paper appeared on the science preprint repository ArXiv discussing exactly this phenomena. The preprint (PDF) is available here.

Key to the phenomenon of spectacular friction forces between two interleaved phone books is a simple geometrical conversion of the traction force to an orthogonal component which enhances the load and thus the friction. This geometrical conversion (i.e. the huge self-created friction) is a direct consequence of the non-zero angles that the sheets make as they approach the contact region. Due to the stacking of the sheets in the contact region, the normal forces due to the geometric conversion cumulate towards the inner sheets, which results in the friction force between the interleaved books to depend exponentially on the number of sheets involved.

The fact that the anomalous geometrical amplification of friction results solely from the slopes that the sheets make as they approach the contact area, can easily be verified. As the authors state: one can realize an interleaved-book system with non-sloping sheets by removing alternating sheets in two notepads. In such a case, the books can be easily pulled apart. 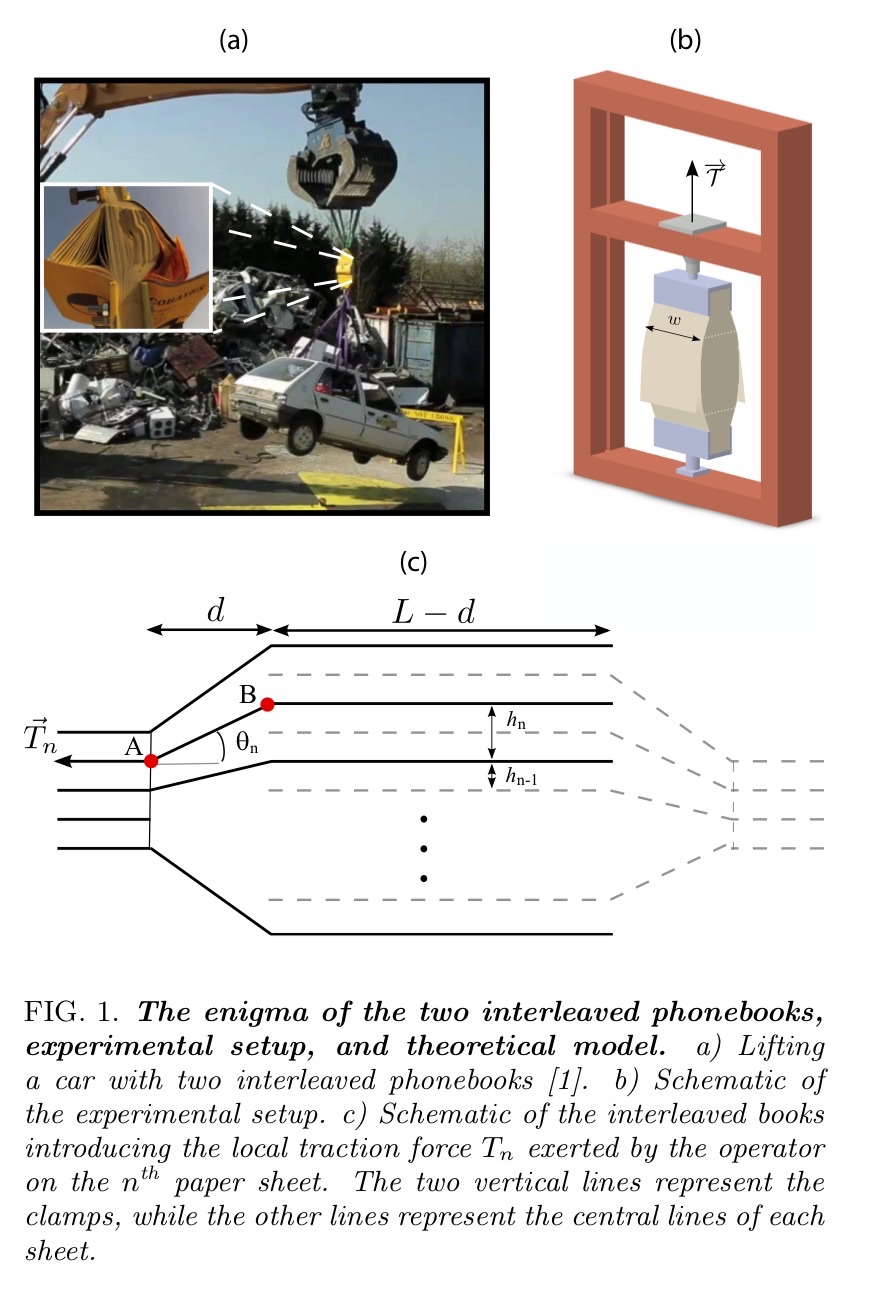 Each page between pages has some static friction force threshold based on the effective coefficient of friction and the normal force compressing them (even if it's just gravity). Like MSalters said, the fact that there are hundred of pages doing this means you have a very large area over which it's applied, but that's not what makes the difference. That normal force applied over a massive area would mean nothing, but the fact that the pages are stacked means that the normal force is multiplied by the number of touching surfaces!

To think of it another way, each page between pages has a full normal force-worth of friction, while the tangential pulling forces are distributed between all of the pages. Thus, the friction each page has to hold is relatively small.

Still, they measured 8,000 lbs of force to pull those books apart. If you guess that each has about 400 pages (800 total), that's around 10 lbs per page, which would be stretching it even if the pages were taped or glued together! So there's clearly something else at work here besides normal friction.

I think one important effect is that the interleaved pages are thicker together than each of the books' spines, so when pulling the books apart, it compresses the pages together, resulting in a much bigger normal force. If you just hold a ream of paper in your hands, it has no trouble falling apart.

I also want to say that there must be some electrostatic phenomenon going on. Phone books and magazines have thin pages. Sliding things across each other is a great way to generate static electricity. Normally it's done with different materials, and I'm not being particularly scientific here—this is a hunch, but I feel like phone books and magazines do tend to have staticky pages (it's been a while since I've touched either, but hey). Sliding that many static-inducing surfaces across each other could generate a lot of charge separation, which would take a lot of energy to do. Again—I don't have much evidence to back that up, it's just my intuition trying to rationalize the fact that it took two tanks to separate a pair of interleaved phone books!

Here is a simple card trick.

Take a deck of cards. Squeeze them down on a flat surface. Break it in half. Leave the bottom half on the table. Now look at the card and set the deck back together. For the trick, push the side of the top half of the deck.

It should slide at the break and reveal your card.

This is also how you can find your page if you accident my close a book. It works quite often.

I believe this is part of the force holding the phone books together...

I set up a simple experiment to test the question if there are more forces at work than static friction. The experiment was one notebook, the clamping notebook, sat along the edge of a table and another notebook, hanging notebook, hung from it by a sheet sandwiched near the bottom of the clamp. The clamp was secured by its spiral using some pens and tape.

I can go over the physics, if you like, but I had calculated it would take the whole weight of the clamping notebook to hold the hanging notebook in place. It turned out to be much less, only 20/78 of a notebook. There appeared to be a force equal to that of static friction (assuming a standard coefficient of static friction for paper) that was unaccounted for.

I think what best explains this is whatever explains the anecdote of the card trick. There must be some kind of air pressure missing from the air being squeezed out between the pages.

I noticed it a great deal in the experiment, the first time the hanging notebook slipped out there was 16 pages pressing down on it. It stood stationary a few seconds before falling. Lower amounts of pages also held but only for a few seconds. It had a consistent delay, even when only one sheet and the cover clamped on it, very little weight, after pressing down there was a several second delay (while air was drawn in) before the notebook slipped outright.

This seemed to agree with a search, for example Fuji printers says it is between 0.7 and 0.4. An average of 0.55, exactly what I went with.

Again, in my experiment there is no "binding", both literally and figuratively, so there is an additional force, other than static friction, that nearly doubles the holding power.

Another and perhaps more important factor that comes into play is that paper is a somewhat unique substance. Apply tension to a rubber band or steel rod and they stretch and get thinner. Most substances work this way; they have a positive Poisson's ratio. Paper doesn't act like this. Apply tension to paper and it gets shorter and fatter. Paper is one of those rare auxetic materials with a negative Poisson's ratio. This is why this trick wouldn't work so well with phone books made of rubber or steel. The doubled-up layer will get thinner and thinner with increasing tension, and eventually those rubber or steel phone book pages will simply slip apart. With paper, the doubled-up layer gets thicker and thicker with increasing tension. This makes the normal force and hence friction increase with increased tension.

Finally, phone book paper is amongst the cheapest of papers. It is not made to last long, and it is not particularly well-made. Phone book paper is not uniform, from sheet to sheet, and even within a sheet. These non-uniformities result in different responses to tension from sheet to sheet and across a single sheet. The result of this non-uniformity is a huge number of dovetail-like joints that make the grip exceedingly strong.

It's not really that much of a surprise when you think about it.

0
Derivation of friction in interleaved phonebooks

12
Static Friction - Only thing that can accelerate a train?
5
Is it possible to fly like a bird using semi-motorized wings?
0
Two-linkage under the force and friction
2
Cable wakeboard raley
2
What is the physics behind a hard phone cover and a soft phone cover?