What does the first column in the "decay modes" table mean (in Particle Data Group documents)?

As a follow-up to this more general question, what are the values in the first column of each of the "decay tables" in a PDG document describing? 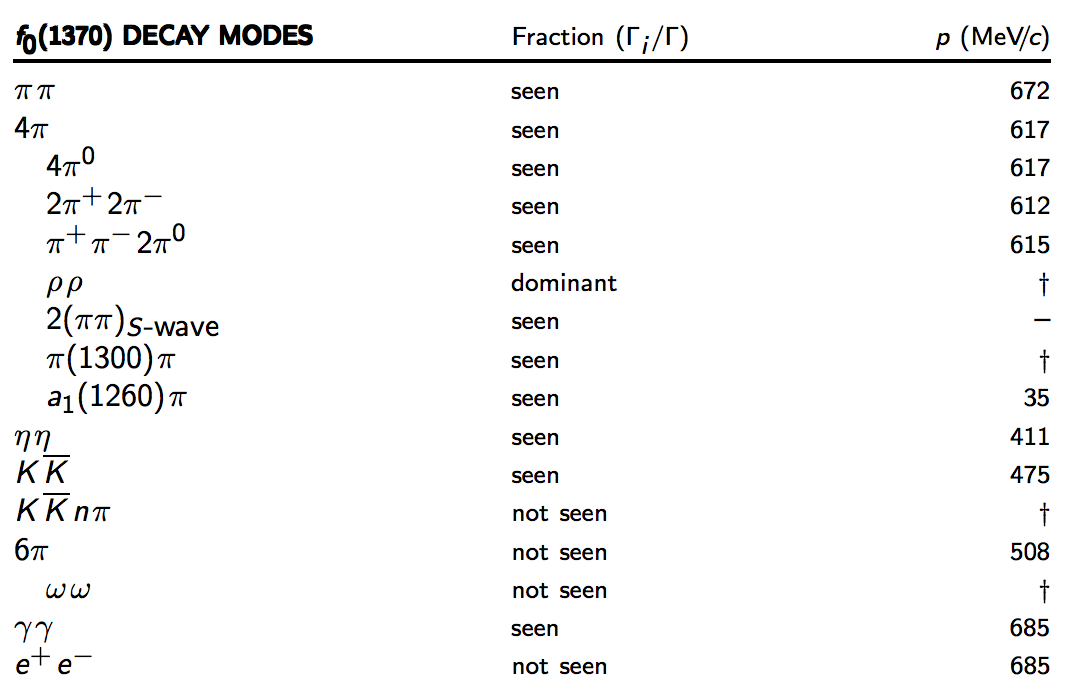 What are those things in the first column? Are they just decay equations? That is, could you rewrite all of those like this?

Or do they mean something different? Basically, what are they saying in general? Looking through the the document linked to in the image above, there are many different forms those values in the first column of the "decay modes" table take. Is there a standard sort of "syntax" for writing these things out?

Also, what does the indentation signify? That is, why is there a bunch of stuff nested under $4π$ and stuff under $6π$?

I addressed this a little at your other question but this one is more like physics.

Yes, they're decay product lists. Beware that if all the modes are only "seen" or "not seen," you are sort of looking at the hairy edge of what's experimentally accessible.

The indented lines are subtypes of the same reaction. Using your example, a neutral particle can decay to four pions by emitting

These all get lumped together because they all look like four pions at the final detector; to distinguish them you have to reconstruct the energies and momenta of the individual pions in each decay and decide whether they are distributed like a real four-body decay or like a series of fewer-body decays.

Not the answer you're looking for? Browse other questions tagged particle-physics standard-model notation or ask your own question.

7
Is there a concise-but-thorough statement of the Standard Model?
10
Textbook about the handiwork of a HEP analysis?
6
Understanding the Particle Data Group review documents
1
What is meant with an $X$ in the particle data booklet?
3
Difference between 'anything' and 'X' in Particle Data Group publications' decay modes?
1
How are branching ratios for the Higgs boson calculated?
1
Where can I find the mesonic decay constants in the particle data group listings?
0
What does it mean to assign group operations to distinct sets for space groups?
2
Why is the pattern of full decay widths of $\Upsilon(1S)–(2S)–(3S)$ mesons inverted?
2
Why does neutral/EM meson decay scale as the cube of mass?