With respect to the doppler effect, are pitch changes sudden or gradual?

Before reading the below content, it is important to read the final note at the bottom first.

Take this excerpt from Wikipedia regarding the Doppler effect: if the siren approached the observer directly, the pitch would remain constant until the vehicle hit him, and then immediately jump to a new lower pitch. Is that really true? I believe, from the sound of a car honking its horn at me, the pitch gradually increases as the horn approaches, the frequency at rest of the horn will match my perception of it once it reaches me, and then gradually decrease in pitch as it moves away. This is owing to the idea that as the transmitter approaches, the distance between it and me decreases, and thus the sound waves, or whatever, has less distance to travel and thus the sound of the horn will gradually increase, not suddenly.

Suppose the horn is moving towards the observer. As the distance between the source and the observer changes lineally with uniform velocity, the change in frequency with respect to distance travelled should also be lineal as follows: 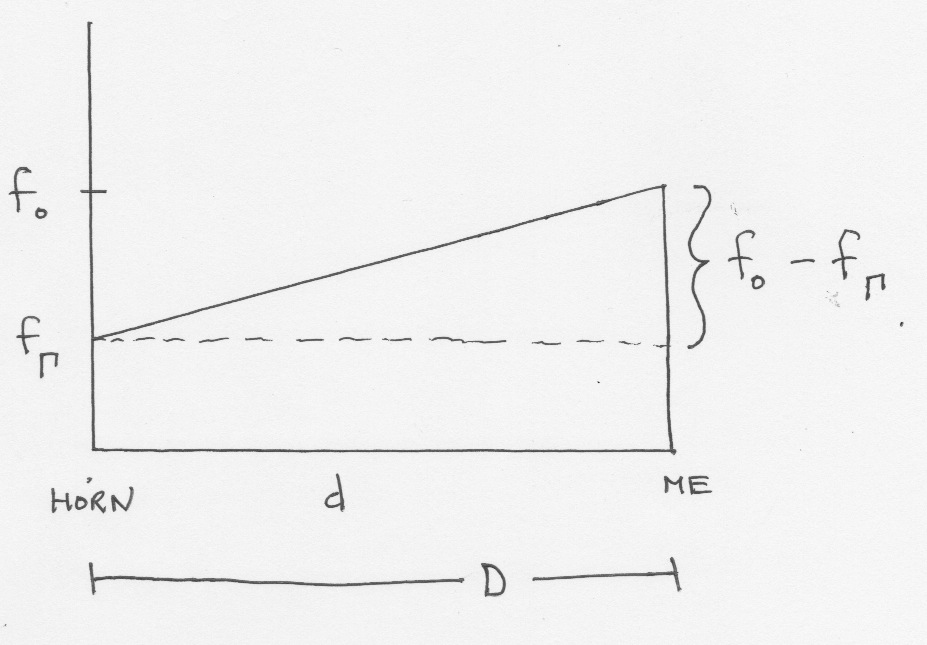 Allow me please some time to modify my thinking, I have done some research looking up the answer. Please see the following diagram, 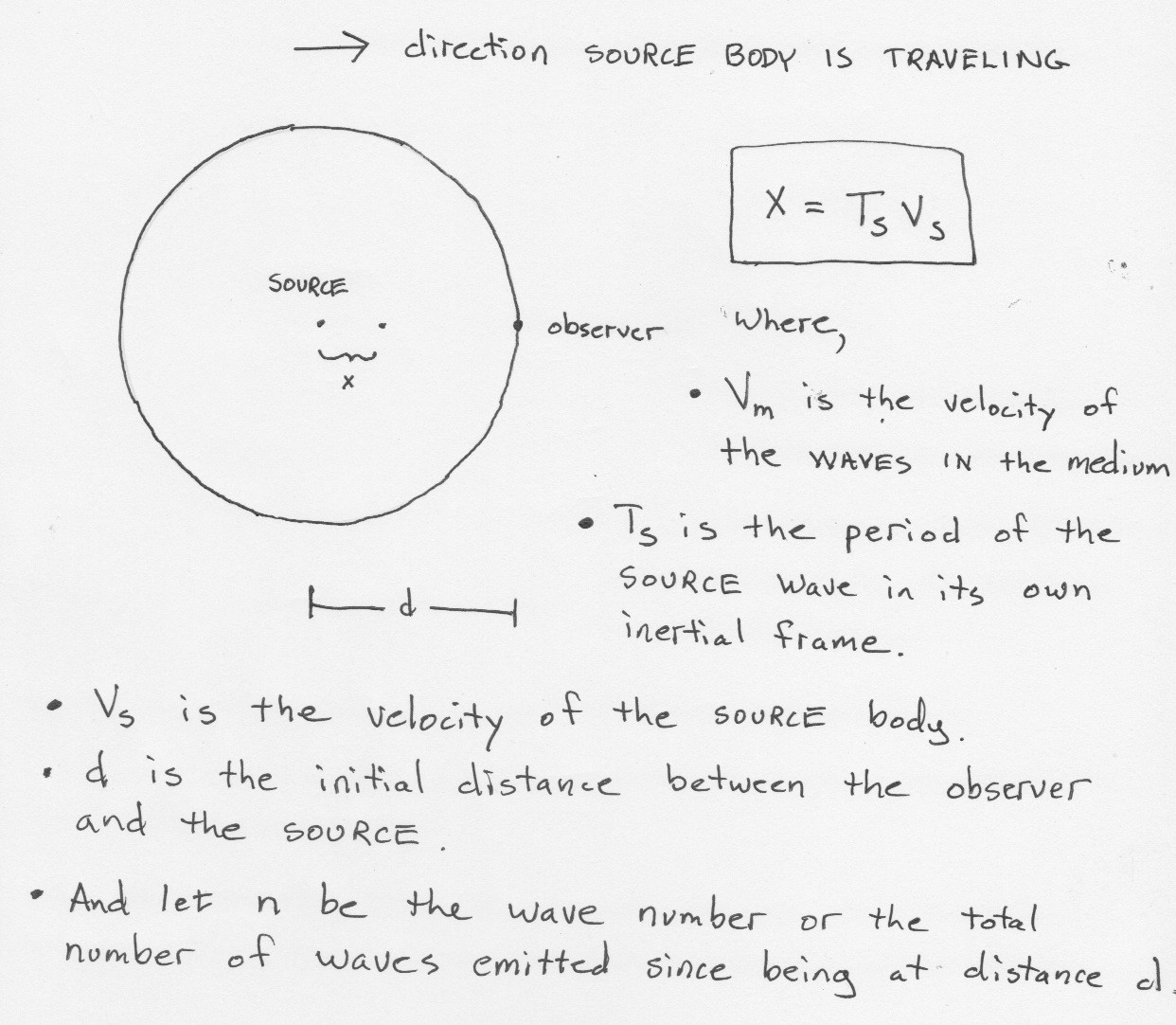 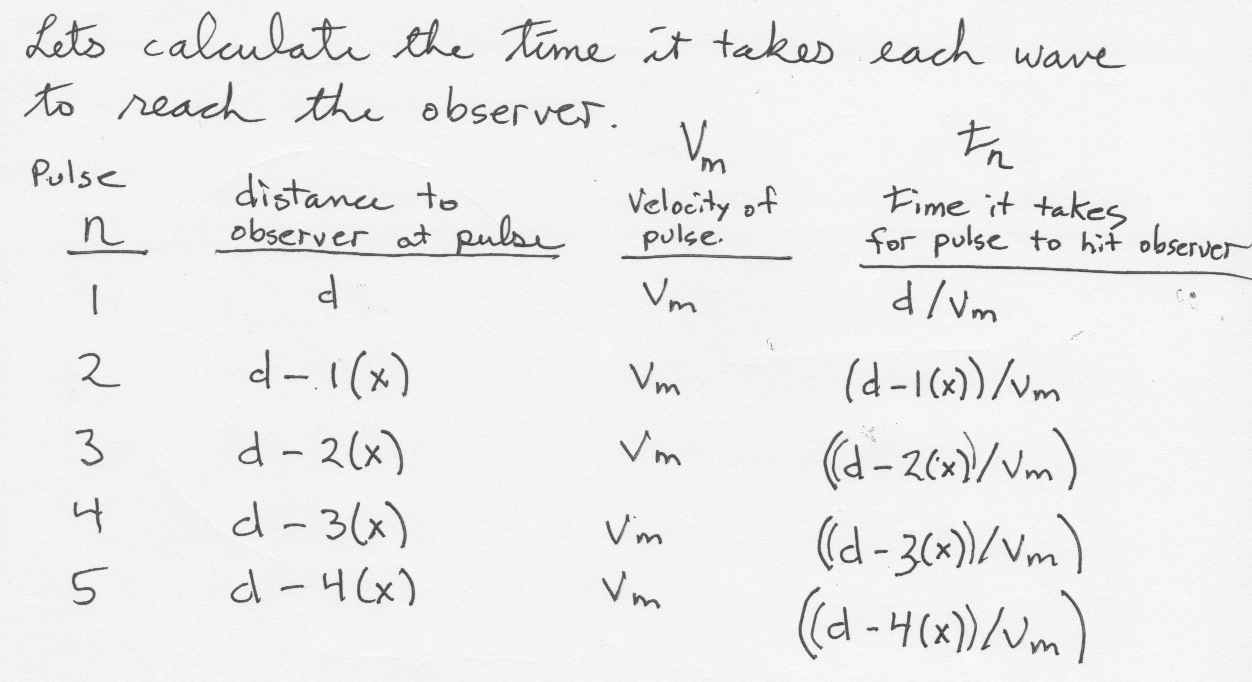 Thus in general, the time it takes for pulse $n$ to get to the observer is given by,

The above is just nonsense, For the correct derivation, please see the help I received: Doppler Effect YouTube

If the car with the siren runs you over you won't be hearing anything after it "passes". By definition the line of travel of the sound source must it intersect the observer. But if you write down the expression for frequency vs time as a function of distance of closest approach you will see that in the limit where that distance becomes zero, the step gradient becomes infinite.

For a perpendicular distance $d$ between the path of the source and the observer, with $t=0$ at the point of closest approach, and velocity of sound $c$, you can write the frequency as

As $d$ goes to zero you can see the fraction flips from +1 to -1, giving you the "instant" change when the sound source overruns (coincides with) the observer.

For the derivation, see the following diagram, and find an expression for the relative velocity $v\sin\theta$ as a function of time, the substitute into the classical Doppler equation. 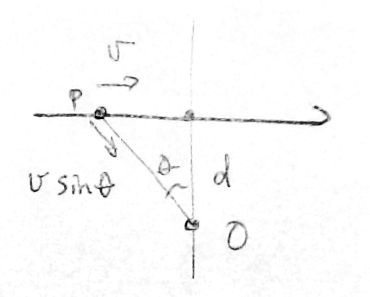 The key step to note is that the velocity towards the observer, $v\sin\theta$, can be found from

Here is a plot of the above equation for a few different values of $d$, the closest distance. As you can see, when the object is coming "almost" straight at you (10 cm closes approach), the frequency (nominally 440 Hz) shifts "instantly" (limited by time resolution of the calculation): 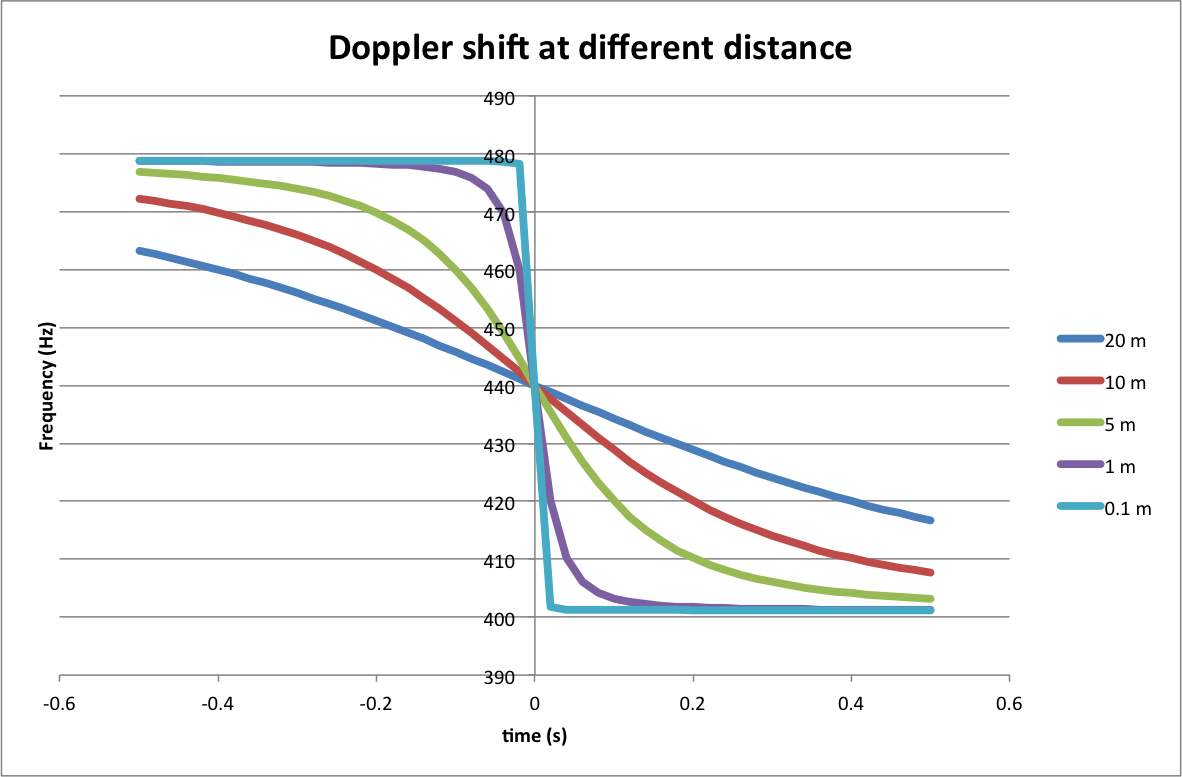 Rewriting the Doppler equation for $d=0$, you get simply

To understand this intuitively, you need to think about the fact that when the source is heading straight towards the observer, the amount by which the distance decreases per unit time is the same. So the next wave is emitted from "closer up", which is why it arrives " a little bit sooner than expected from the frequency". But at that point you can reset your timer, and the next wave again arrives "a little bit sooner than expected" - in other words, each crest arrives "too soon", but by the same amount. That is why the pitch does not change as the source gets closer in the case of the head-on trajectory. For any other trajectory, the component of velocity of the source towards the observer decreases as you get closer, and the pitch gradually decreases.

Not the answer you're looking for? Browse other questions tagged doppler-effect or ask your own question.

29
What do you really see on a line of clocks as you pass by them at high speed?

7
A Doppler Effect problem with a moving medium
3
Is the Doppler effect for sound symmetrical for observer or source movement?
7
Question on luminosity of a radiant source and its dependence on temperature, and involvement of Doppler Effect
4
A question on the redshift of photons due to cosmic expansion
1
Apparent frequency as function of distance
1
Images traveling faster than light
3
Why is the sound produced by a sonic boom low pitched?