How to calculate wasted energy

Suppose you are pulling a weight along a track at an angle (in the picture 45°).

If this is correct, can we legitimately suppose that the same amount of energy/calories were burned in both cases, that is: $E_0 = E_{45} = 1.41 * K$, but, since the work done is less, that is: ($W_{45} < W_0 = 0.7* W_0$) can we therefore conclude that the energy wasted in the first case (calories burned doing no mechanical work) is 41%? That energy was wasted trying to dislocate the track or derail the cart: non working (reactive) power 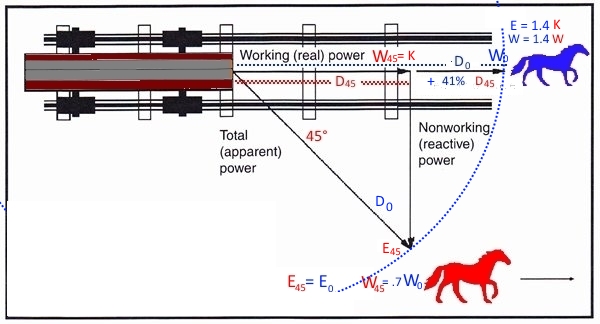 (If this is not correct, how can we calculate the energy wasted when we apply a force at an angle greater than 0°?)

So no mechanical energy is being wasted by pulling at an angle.... However this overlooks the fact that muscles are inefficient things and consume energy even when no mechanical work is being done.

I knew that no mechanical work in excess is done, that is because of the peculiarity of the definition of work. I tried to dodge this ostacle speaking of calories burned: I thought we can desume the exact value by, so to speak, reverse engineering.

The logic is this: we have instruments (I am referring to instruments, so we avoid inefficiency of human muscles) to produce and measure force. If we measure the force something exerts on a blocked object, then remove the block and measure the oucome of that force, can't we deduce that the same force has been applied before and the same amount of energy/calories has been burned withoud doing any work? If this logic is valid, the same logic has been applied to the horse.

A biologist can tell yus the percentage of calories burned in excess with regard to the effective force applied/ transmitted: the inefficiency of the human machine is around 80%. WE burn 4 - 5 times more energy than we put to avail. Efficiency may vary from 18% to 26%. In the case above, energy actually burned would therefore be 41 * 4.5 = ca. 185%

Let's zoom in on the horse to look at the forces being applied and the distance moved:

It's certainly true that the horse is exertiong a force $F$ that is greater than the force on the train, and the horse also moves a distance $d$. But remember that work is given by:

where the force $\vec{F}$ and the distance $\vec{d}$ are vectors and the $\cdot$ is the dot product of the two vectors. The dot product is defined as:

So no mechanical energy is being wasted by pulling at an angle.

However this overlooks the fact that muscles are inefficient things and consume energy even when no mechanical work is being done. This does indeed mean the horse will use more energy to pull the train at an angle, but this is just down to way muscles work rather than fundamental physics. To calculate the extra energy the horse uses you'd have to go off and ask a biologist about muscle physiology.

The key problem in your analysis is this mistaken assumption:

No, you cannot assume that. If you developed an efficient machine for pulling (instead of a horse which is very inefficient) then it would burn less energy in the "diagonal pull" case.

Not the answer you're looking for? Browse other questions tagged newtonian-mechanics forces work or ask your own question.

21
Does it take more energy to open a door when applying force close to the hinge?
11
How was the definition and the formula of work derived? Is it the best possible?
2
Wasted energy applying a torque
1
Does an opposing force cause loss/ waste of energy?

8
Intuitively, how can the work done on an object be equal to zero?
2
Wasted energy applying a torque
1
Does an opposing force cause loss/ waste of energy?
0
Problem with variation of velocity, doubt on the work energy theorem
9
Which force is doing the work here?
1
Why work done is needed when other physical quantities are available?
0
The energy spent when pushing a non-moving object versus pushing a moving object with the same effort