Why do we perceive a colour?

White/yellow light hits a red case, and the red color is reflected into our eyes, since other wavelengths are absorbed.

My question is: since both the paint on the case and the white light have wavelengths, is there any connection between the paint's wavelength and the red wavelength from the light that makes the observers see only red light?

Basically, what properties of the paint make it absorb less red wavelength?

There exists a good answer to what is color which stresses that the question is mainly about physiology of the eye.

I will address the last part:

Basically, what properties of the paint material makes it absorb the red wavelength the least?

Light has a specific wavelength . If that wavelength impinges on the eye receptors, it gives the colors we have named and appear in the rainbow

red to cyan, depending on the wavelength, a one to one correspondence frequency to color.

Light is composed of photons, elementary particles with energy E=h*nu, nu the frequency. All material substances have atomic energy levels that can be excited and deexcited emitting photons of different frequencies. A material on which a monochromatic (one frequency) laser shines on will absorb the frequency if it coincides with the energy levels of its surface atoms and will have a reflectivity for the frequency which will allow to "see it as red". You see red above because the screen material is emitting the red frequency.

BUT perception of color is a biological function of the eye, which creates the same perception of yellow with single frequency by a confluence of red and green 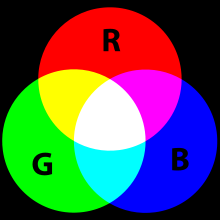 called primary colors. The polaroid camera inventor managed to get the perception of a full spectrum by just using two frequencies. So color perception is mainly in the eye of the beholder.

The paint might be reflecting a single frequency identifying its color, i.e. red in frequency impinges, some of it is absorbed and some reflected. The property then is the reflectivity of the painted surface. Most probably the red paint has a number of frequencies absorbed and reflected so that the reflected light excites the red color perception in the brain.

Not the answer you're looking for? Browse other questions tagged visible-light wavelength or ask your own question.

9
What are colors?
1
Can 2 photons make up the same colour as another photon?

7
Difference between Scattering and Fluorescence
9
Why does mixing every paint colour produce gray instead of white?
0
Why does yellow line on road seem white at night?
3
Physics of color: why do visible colors absorb all colors except the color itself?
2
Is the yellow we perceive when our eyes are hit by red and green light at the same time the same yellow that is at the yellow frequency/wavelength?
0
Why do objects reflect laser light?
0
Color reflection depending on its spectrum
4
Why is wavelength of violet colour less than wavelength of blue colour?