I roughly understand the explanation for this: any electric field line that enters the surface, must leave it, since field lines can't terminate abruptly in space. My question is, what if you have a charge $+2q$ outside your gaussian surface, and a charge $-q$ inside it? Wouldn't the field line end at the charge $+q$, and so the field lines that enter don't necessarily leave, making $+2q$ contribute a negative flux? 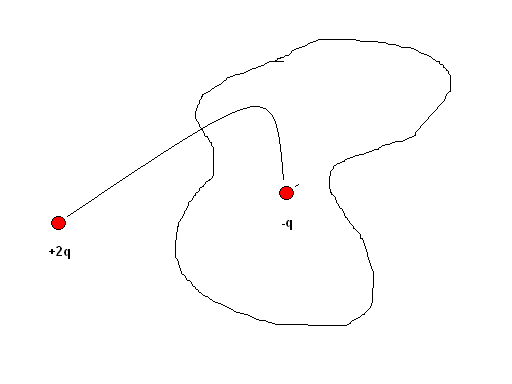 Wouldn't the field line end at the charge +q, and so the field lines that enter don't necessarily leave, making +2q contribute a negative flux?

The quantity of field lines that terminate on the charge -q is unchanged by the presence of charge elsewhere.

Imagine -q field lines terminate on the -q charge. Then, the net electric flux outward through the surface enclosing (only) the -q charge is $-\frac{q}{\epsilon_0}$.

If there is no other charge, the field lines of the charge extend to infinity.

In other words, whether the -q field lines originate at infinity or a 2q charge outside of the surface is irrelevant.

For either isolated charge, there are 16 field lines that originate or terminate on the charge.

If the two charges were not isolated from each other, the 16 field lines from the positive charge would terminate on the negative charge but there would still be only 16 field lines originating / terminating on either charge.

Thus, in either case, 16 field lines cross a surface enclosing just one of the charges - the electric flux through the surface is the same in either case.

The net flux crossing the Gaussian surface (according to Gauss's law) is irrespective of those charges outside it.

In some detail about your case:

I think the correct answer for your question is that the electric charge outside of a closed Gaussian surface does not enter inside because the surface is enclosed. Take a look at the Faraday's cage and you can also take into account why we are not affected when driving in a car and get struck by a lightening.

Not the answer you're looking for? Browse other questions tagged homework-and-exercises electrostatics gauss-law or ask your own question.