When blowing air through a tube, why does it act differently if I press the tube against my mouth, or hold it an inch away?

My question is why is there a difference? In both cases I would expect that since air is going in one end, it would come out the other. When I press the tube against my mouth and blow, but very little air comes out the other end, where does the rest of it go?

PS: I don't know what tags to give this question and I can't think of a good question title. I'm new to the physics sub.

Very interesting observation. I think what you are observing when your mouth is away from the tube is MORE than just the air you exhale - because the air in the vicinity of your breath is being "dragged along" by something called "entrainment". This is the principle behind an ingenious fan, called the Dyson Air Multiplier: 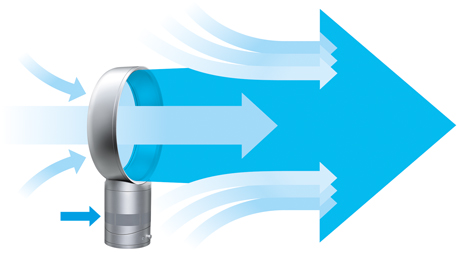 A detailed explanation of how it works can be found here but it should be pretty obvious from the picture: a little bit of high speed air is being forced through holes in the rim of the "fanless" device (actually there is a fan in the base where the dark blue arrow points - it is responsible for creating the high speed jet of air) and this fast air drags a lot of slower air with it.

It's cute, and it does work. And that's what you are doing with your mouth.

The reason for the entrainment is Bernoulli's principle: when air goes faster, it has a lower pressure so it "sucks" on the air around it. When the slower molecules collide with the faster ones, they end up sharing the momentum. Instead of one fast one, you have two medium-speed ones now.

As mentioned in the other answer, additional air is being entrained. This principle can be used to produce considerable flows and considerable pressure differences.

In a steam locomotive, the exhaust steam from the cylinders is directed to a nozzle that points upwards towards the exit of the funnel. This draws the smoke through the boiler and blows it out of the funnel, enabling fresh air to be drawn in for combustion. http://en.wikipedia.org/wiki/Blastpipe

Another device used in steam engines is the injector, which uses steam from the boiler to pump boiler feedwater (somewhat counterintuitively, the pressure achievable is greater than the pressure of the steam used!) http://en.wikipedia.org/wiki/Injector

In chemistry labs, a similar device uses the velocity of tap water to produce a vacuum inside dessicators (in order to dry samples) and for filtration

In industry, steam ejectors are used to maintain a vacuum, for example in the condenser of a power station boiler (there is a chance that a small amount of noncondensable gas can leak into the system.)

Carburettors use this principle to mix air and fuel. The greater the air flow, the lower the pressure, and the more fuel is sucked in. http://en.wikipedia.org/wiki/Carburetor

The principle at work here is conservation of momentum. Mechanical energy, however, is not necessarily conserved. Properly designed, long venturis can achieve reasonable efficiencies, but many devices that work on this principle do not need to be particularly efficient, and much of the mechanical energy is dissipated as heat by friction.

The Dyson Air multiplier mentioned in the other answer looks cool and is noticeably quieter than other fans (I have seen one working on display in a department store). But it is not efficient. It accelerates a small mass of air to a high velocity, then mixes it with ambient air to produce a large mass of air at low velocity.

When calculating the kinetic energies for the streams, it becomes apparent that unless the device is designed to ensure the velocities of the two streams are about the same at the mixing point, a lot of kinetic energy m*v^2 / 2 is wasted.

Bernoulli's principle can be used for calculations where the entrained flow is very small relative to the main flow.

Not the answer you're looking for? Browse other questions tagged pressure air or ask your own question.

6
How does the venturi principle work without a rate increase of the fluid?

4
Why the breath sometimes warm and sometimes cold? (2 different explanations!)
5
Why Does Air Hold More Water When the Air is Warmer?
1
Atmospheric pressure on a flat object
35
Can a balloon be inflated with electrons?
0
Hydrostatic pressure to measure water level
0
In a spinning tube, how low can the vacuum in the center be?
2
What is the relationship between pressure and displacement of a sound wave in a tube?