Is it possible to determine whether distant galaxies are gravitationally bound

In a previous question, one issue was related to the potential energy of cosmic structures. This raised in particular the question of whether these structures are gravitationally bound.

If you consider a group of say, 50 galaxies, I guess one can decide whether they are gravitationally bound by comparing their positions and velocities, even if the galaxies considered do not constitute the whole group thus bound.

Considering a group of very remote galaxies, I presume (is it correct?) that all one can measure only angular distance, and their redshift which is due to their peculiar velocity and their distance (through universe expansion).

Given a set of such measurements for each member of a group of galaxies, is it possible on that limited basis to determine whether these galaxies are gravitationally bound, and to infer from that more precise information about these galaxies?

Are there other measurements that can be made to help that determination?

You're right that determining gravitational boundedness at large distances is difficult. Quick recap of the information on hand regarding the positions and velocities:

But there are some tricks astronomers use to try and do better. It helps if you have a redshift independent measure of the distance to the galaxies, but beyond the local Universe only SNIa luminosity tends to be any use, and you'd need to be uncommonly lucky to get SNIa measurements in the two galaxies you happen to be interested in. There are also the Tully-Fisher and Faber-Jackson relations (thanks Chris White for the reminder) that can help with distances, but the scatter in these relations is large enough that it's essentially useless for determining boundedness (this is actually also true of the SNIa measurements, usually).

About the best we can do is come up with bound pair/group candidates and then try and reinforce or invalidate that hypothesis. Coming up with candidates is pretty easy - you look for galaxies with small angular separations, and that have similar redshifts within some tolerance. There's always a chance you could have closer galaxy with positive peculiar velocity and a more distant galaxy with a negative peculiar velocity conspire and have a similar redshift, so this doesn't confirm that the two galaxies have similar distances, but it can refute it. If the two galaxies have a velocity offset (velocity in the sense of peculiar + recessional) of say $15,000\,{\rm km}/{\rm s}$, you can be quite certain that they are not bound.

Another thing people often look for is morphological disturbance. If a pair of galaxies are interacting enough to pull big tidal tails off of each other, then they are almost certainly gravitationally bound. A particularly striking example: 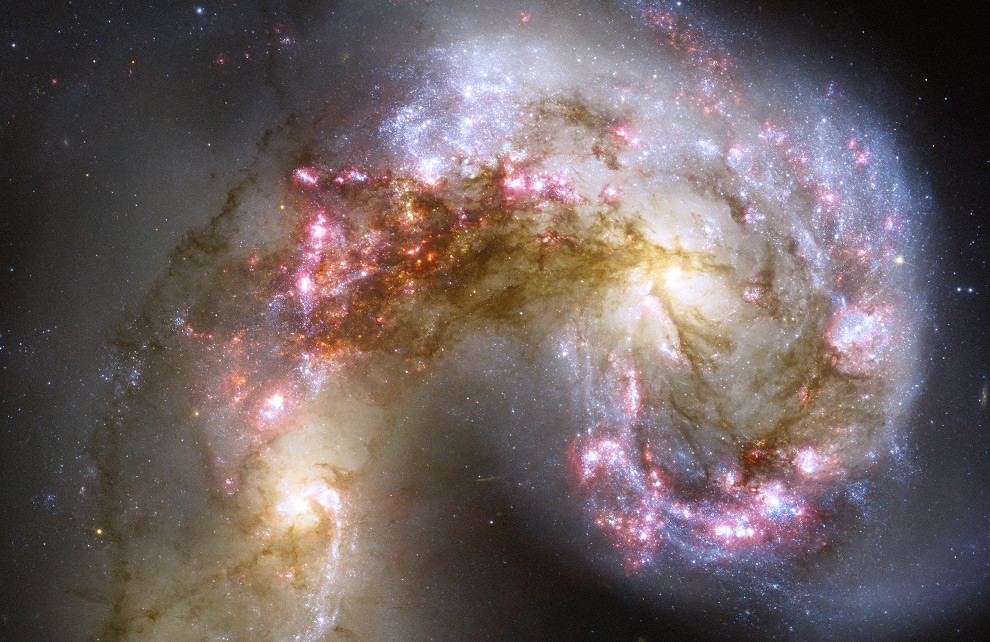 No one argues that this pair is gravitationally bound! For a more technical overview, here is a recent paper that uses morphological disturbances to look for mergers/interacting pairs.

There is another technique which works reasonable well, but only in the case of larger groups and clusters of galaxies. A galaxy colour magnitude diagram shows the colour (difference in luminosity in two broadband filters) as a function of the magnitude in some broadband filter. The textbook example is as a function of absolute magnitude, and in this case most galaxies tend to land either along a line called the red sequence or in a region called the blue cloud. Here's an example from the MSc thesis of a friend of mine (the blue cloud is not visible here because there is a well known deficit of blue galaxies in clusters, and this sample specifically targets a cluster; also note that the x-axis is flipped relative to the schematic in the Wikipedia article I linked): 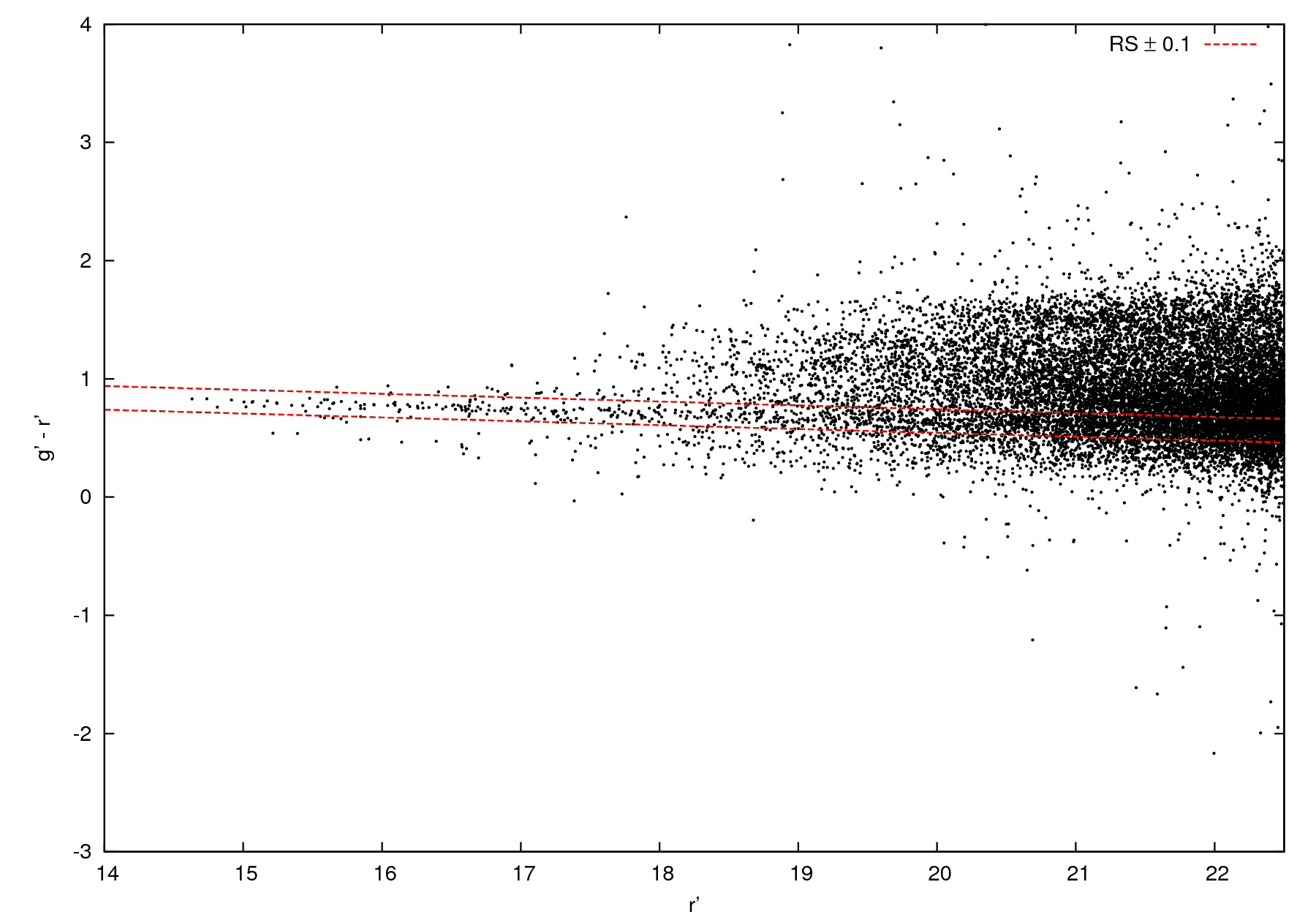 A more distant galaxy is on average further right (apparent magnitude gets fainter) and up (colour redder from redshifting) on this diagram. The nearly horizontal bands, one of which is highlighted, are the red sequences of a series of bound structures at different distances along roughly the same line of sight. The dots between the lines are candidates for membership in a single galaxy cluster. Of course there's a very obvious chance that some of those belong to the scatter in the distributions of some of those other red sequences, but a majority of the dots between the lines are from a single gravitationally bound galaxy cluster.

Finally, I'll shamelessly plug some of my own MSc work, the gist of which is that given only the two observables (bullet points) I started this answer with, you can get the probability for a given galaxy being a member of a cluster that it's close to in projected position and line of sight velocity (the probabilities are all calculated from simulations, where you know everything you could care to about the kinematics of the dark matter haloes that host galaxies). The catch is that you need to know some properties of the cluster to begin with, but in practice for large clusters it's easy to get a sufficiently accurate estimate of what you need to get the method to work. The cluster members occupy the red portion of this diagram, while the non-members ("interlopers") occupy mostly the blue region: 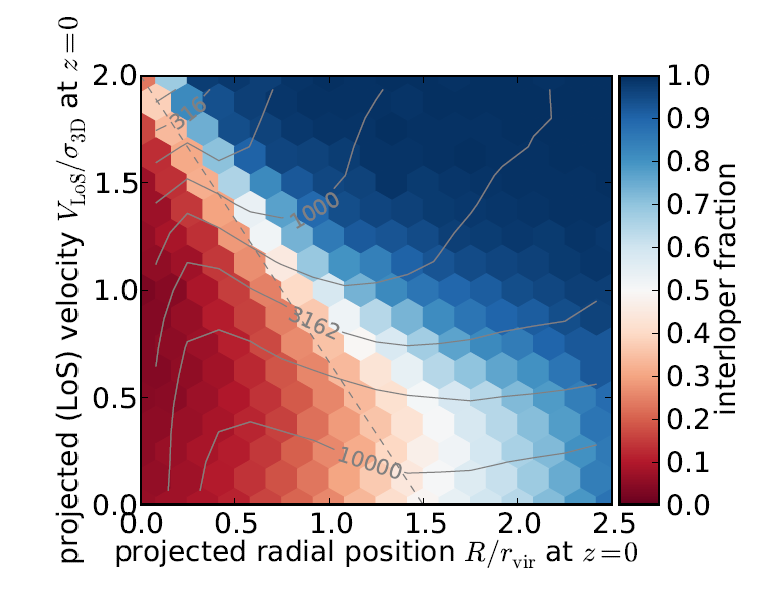 Not the answer you're looking for? Browse other questions tagged gravity cosmology space-expansion measurements galaxies or ask your own question.

3
How are galaxy filaments formed? And do they have any analogues in stellar formation?
4
Why are distant galaxies not actually tiny bits of matter?
12
Gravitationally bound systems in an expanding universe
3
Measuring more accurately the distance of remote galaxies
8
In what manner does momentum of a particle with mass decrease due to spatial expansion?
1
Do the distances and velocities observed from galaxies other than Milky way really show that every point in the universe is the center?
2
How do we know that galaxies are not losing significant numbers of stars from their outer regions?
0
Assuming the big rip scenario is possible, what happens exactly at $t=t_{rip}$? Is spacetime really ripped?