We all know about the fact that tidal friction is slowly slowing down the Earth's rotation about its axis, and that subsequently the Moon is slowly drifting away, in order for the angular momentum of the Earth-Moon system to be conserved.

Which term increases? Can the Moon just revolve faster around its axis without receding in its orbit?

And on a related note:

Physically, how can it be that tidal friction on Earth makes the Moon do something? I know it is because conservation of angular momentum, but I always try to use conservation laws as a conclusion more than as the primary explanation: does the water bulge accumulated on one side of the planet because of whatever exert an extra gravitational pull?

How much time does it take for this information to travel from the Earth to the Moon?

Physically, how can it be that tidal friction on Earth makes the Moon do something? I know it is because conservation of angular momentum,

The changes occur because the earth's tidal bulges make opposite torques on the moon, and these torques don't exactly cancel. The lack of cancellation is because friction causes the bulges to be misaligned with the earth-moon axis, and also because the bulges are at unequal distances from the moon, as explained by the following diagram: 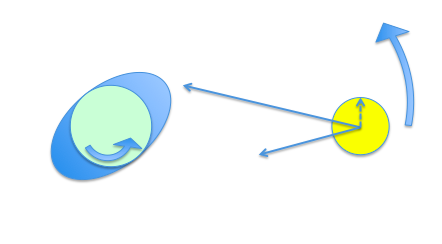 As the moon moves in its orbit, the bulge of the tides leads a little bit (because of drag on the earth's surface). Consequently, the bulge that is closer (and thus has a stronger force on the moon) is slowing the moon down a little bit; this force is not completely canceled out by the "leading" bulge on the other side, which is further away and therefore provides a weaker force.

This results in the dotted line (net force) drawn, which speeds the moon in its orbit. This actually causes it to move to a larger radius (per the comment by Logan R Kearsley). But there is no torque on the moon about its own axis of rotation based on these tides on earth.

Note also that this is a very idealized sketch. In reality, the motion of the oceans is not a simple bulge - it's not even close - but on average there is some more material "closer to the moon, and leading" as a result of these tidal effects. So while it's not simply "a bump in the ocean" (although my drawing makes it look that way), the effect is real.

Not the answer you're looking for? Browse other questions tagged gravity angular-momentum orbital-motion or ask your own question.

228
Does Earth really have two high-tide bulges on opposite sides?
0
Correcting for oblateness of the Earth
1
On the transfer of angular momentum in the Earth and Moon system