Getting back out of an Alcubierre warp bubble

Does the theory on paper provide a way for hypothetical travelers to get back out of the bubble that has gotten them close to their distant destination by compressing all the space in front of them and expanding the space behind it?

I was picturing space as a sheet of rubber and my warp bubble as the space of rubber under my finger as I press my finger down and drag the 'space' under my finger to where it's near a distant part of the sheet. But despite the fact that I'm now closer to the distant location as measured if you can 'jump over' the compressed rubber, unless there really is a way to 'jump over,' you still have the same amount of rubber between you and the destination.

The interior of the bubble is causally disconnected. It's not possible for the bubble to be turned off or steered from the inside. But there is no reason it cannot be affected from an outside agency at a pre-planned points, or even simply have a finite lifetime, naturally deteriorating to stop at the intended destination.

Intuitively, one can think of it as dual to the cosmic expansion of space: as space expands, it carries galaxies along with it, and because it's space between them that's expanding rather than them moving in space, distant galaxies can have superluminal separation velocity. Effective movement because of the way space expands (or contracts) is different from movement in space.

Even if cosmic expansion could somehow be "turned off", it wouldn't suddenly make all the galaxies contract together again. It would simply stop further separation.

The Alcubierre drive does something similar: instead of expanding space to get away from from distant objects, it contracts it in order to approach them. It doesn't actually need to contract all of space in front of it; it just expands it back after traversing it. In effect, the warp bubble rides its own gravitational field.

Although Newtonian analogies are fraught with peril (esp. here, since not only is gravity different, but the behavior of negative mass especially so~don't take this seriously!), but a fun little toy exercise is to consider what would happen if you lived in a Newtonian universe and had two masses, equal in magnitude but one positive and the other negative.

Pete, please elaborate your question, the original paper by Miguel describes how one can travel back and to a destination using the warp drive. The space in front is contracted to get closer to the destination, and the space behind is expanded. For getting out of the bubble, let's use the picture below: 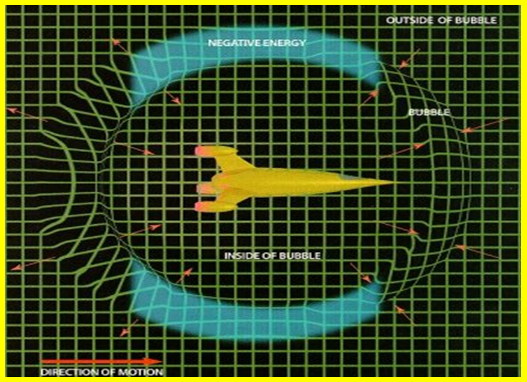 Why is it so difficult to grasp that the bubble is MOVING. You power off your device and the bubble goes away.. You are not warping space from earth to some arbitrary star .. you are disturbing new space as you move not stretching it across light years.