Topological insulator vs. topological superconductors in any dimension

PS: I only know that a topological insulator is some material that is conductor on the edge but insulator in the bulk...Is that definition right in ANY dimension?What about topological superconductors?

For the sake of simplicity, let us limit this discussion to non-interacting fermionic phases: e.g. band insulators with electron quasiparticles and fully gapped superconductors with Bogoliubov quasiparticle excitations. Classification of interacting and/or non-fermionic phases is still work in progress. Before outlining basic differences between topological insulators (TIs) and topological superconductors (TSCs) in words, it is worth mentioning that classification of non-interacting fermionic topological phases, with different symmetries and dimensionality, is elegantly summarized in the following “periodic table” 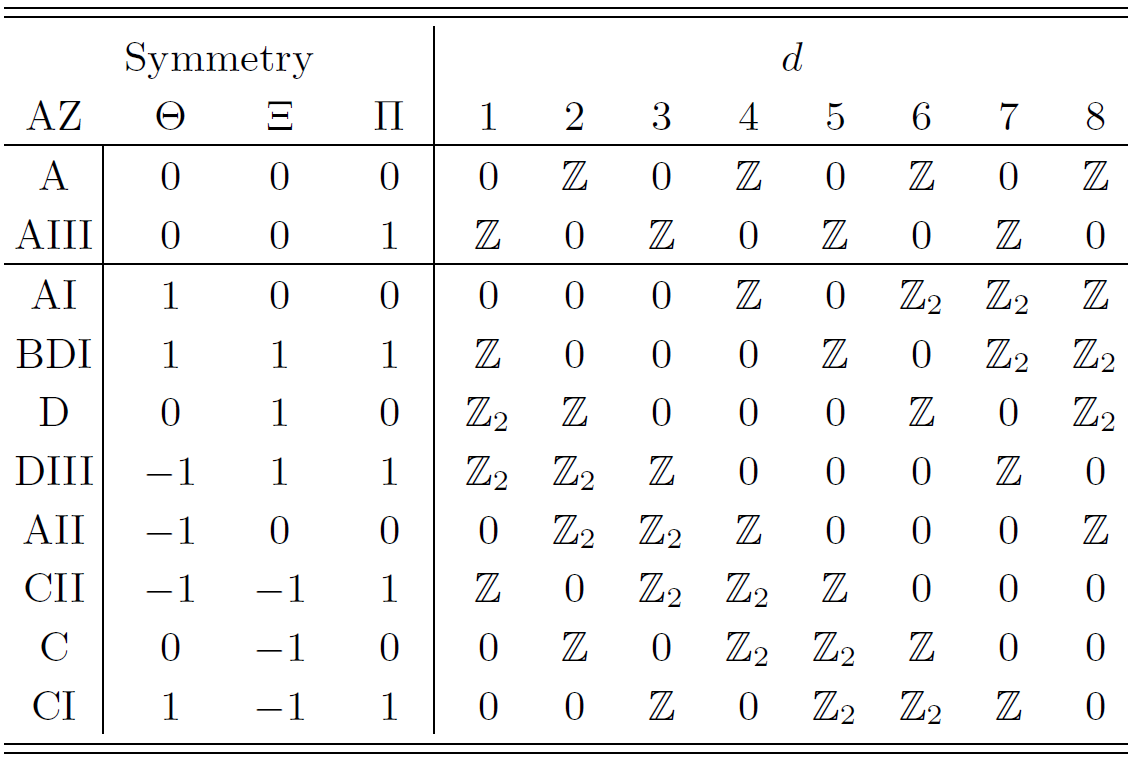 Under the above assumptions, we can represent both TIs and TSCs by at least four- and two-band models (with a gap) respectively. The TI has twice the number of bands due to Kramers degeneracy, which is a result of TRS. That’s the first difference: TIs must have TRS, but TSCs may or may not possess TRS.

Why does a superconductor obey particle-hole symmetry?

for subtleties associated with PHS in a superconductor; but we’ll just take it for granted here.

Here are some examples, of different topological phases, classified in terms of their boundary states (in any dimension), chosen in order to illustrate some of the above differences:

In order to see this pattern emerge, in a rigorous fashion (besides just looking at examples), you need to take the so-called K-theory approach; for details you can look at:

As alluded to earlier, generalization of this classification procedure is still work in progress. One example is the study and classification of the so-called “Symmetry Protected Topological” (SPT) phases, which relaxes the non-interacting and/or fermionic constraints. At least one of the appeals of this classification approach to topological phases is the possibility of theoretically and/or experimentally discovering unexpected and mysterious new phases of matter.

Not the answer you're looking for? Browse other questions tagged condensed-matter topological-insulators topological-phase or ask your own question.

15
Why does a superconductor obey particle-hole symmetry?