My book says that when a photon carrying a certain amount of energy hits an electron, that gets excited and goes on an higher energetic level, absorbing the energy of the photon. When it comes back to its main energetic level it emits another photon.

Generally speaking, the emitted frequency is not necessarily the same as that absorbed but let's suppose that it is.

As the white light (composed of all the different frequencies) encounters the material (the red box, below), certain frequencies are absorbed and then re-emitted but in random directions. So they're scattered. Therefore, far fewer photons of those particular frequencies are observed which gives rise to the dark spectral lines. 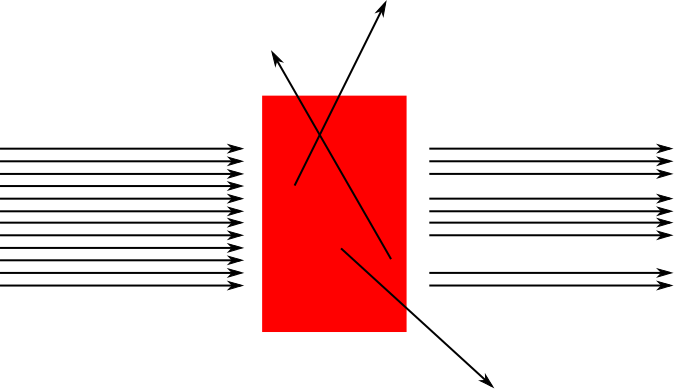 Not the answer you're looking for? Browse other questions tagged photons or ask your own question.

5
Atomic Physics: stimulated emission
1
photon absorption by atoms causes heat?
15
When an atom emits a photon are all directions equally likely?
2
Feynman diagram for photon absorption
1
Do atom absorption lines disappear after being hit by photon?
1
A question on the emission spectrum and absorption spectrum
7
What happens at the QM level with a photon hitting a mirror?
2
Physical meaning of parametric down conversion of photon
2
Do emitted photons have a well defined frequency or just a spread as per HUP?