Are pressure and volume not independent properties in liquid water?

Every thermodynamics textbook teaches us that, for a simple compressible substance, any two independent properties will suffice to determine the system state. Those can be pressure and temperature (except in saturation), volume and temperature, pressure and volume or many other combinations.

However, the later chapters of Van Wylen's Fundamentals of Thermodynamics present me a diagram similar to this one: 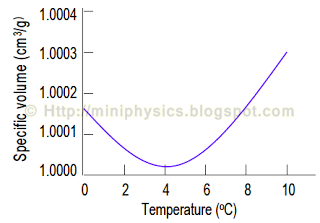 So I conclude that specific volume and pressure are not independent properties in intervals that contain $T=4$. Because, if only $p$ and $v$ are given, the thermodynamic state (i.e. $T$) cannot be determined.

If this is true, I'm shocked that nowhere on the books or the internet this is pointed out. I admit it's a small interval of non-compliance, and often volume is considered almost constant anyway, but, when teaching independent properties, the only exception ever mentioned is the saturation state, where $p$ and $T$ are not independent so $v$ is needed (or $u$ or $h$ or $s$ or...). I feel that my learning of independent properties was incomplete if this is true.

Could you please confirm these thoughts?

I found a paper from 1873 which confirms it. Despite dealing with more complicated implications of the unusual behavior presented here (such as isothermals and adiabatics crossing each other twice), it has something that led me to find another non-independence between variables aside from $p$ and $v$ (spoiler: it's $T$ and $s$).

First, the part that answers my question: (page 2, emphasis added)

The question admits of an easy answer if we consider the case of bodies which can exist in two distinct states under the same circumstances of pressure and volume ; and for the present we may confine our attention to water, which is the most conspicuous representative of the class, and which, at the ordinary atmospheric pressure and at temperatures between 0° C. and 4° C., exists in a series of states in which the volumes are the same as those which it assumes if heated at the same pressure from 4° C. to about 8° C.

Hence whereas for higher temperatures all the properties of water at atmospheric pressure are completely defined if we know the volume, such is not the case between the limits above indicated ; but each point on the line of constant pressure given by $p= \text{1 atmosphere}$ between its intersections with the isothermals 0° C. and 4° C. corresponds to two states of the water, or rather, since if the water-substance be converted into ice it will, if cooled sufficiently, again pass through the same range of volumes, each point corresponds to three states and is the intersection of three isothermals ; and as a similar remark may be made with respect to neighbouring lines of constant pressure, it follows that there is a region in the plane of $pv$ such that three states of the water-substance correspond to each point within it, and that therefore the values of $p$ and $v$ given by any such point do not define the state of the water.

Ok, so it's answered. Now onto the second part (temperature and entropy not being independent).

The paper stated that, since water shrinks when heated isobarically in that region, it would both expand and heat up in an adiabatic process (one where pressure is gradually lowered, for instance). That is, it would both do work and increase temperature without heat input. When it crosses the state of minimum volume, however, temperature would behave "normally" again, decreasing during expansion. That suggested to me that temperature, also, was not independent with regard to some other property, because it would inevitably take the same value twice, but I couldn't prove that initial statement at the time.

Then I went to my textbook and found this Maxwell equation:

The LHS (left-hand side) is exactly the described above: temperature-volume relation in isentropic (i.e adiabatic) process. The paper says it's positive in the region where water shrinks when heated, then negative out of it. The RHS is the pressure change from increasing entropy (e.g receiving heat) in an isometric process. We can infer that, if something tends to shrink, then when constant volume is enforced pressure must go down! So, in the "problematic region," that partial derivative is negative, which makes the RHS positive due to the negative sign. Conversely, out of that region the RHS will be negative.

Summing up, in an isentropic process where pressure is gradually lowered, starting with liquid water @ 0 °C, 1 atm, its temperature would initially rise, then fall until vaporization, then keep falling I guess. Its volume would increase constantly, however.

This is a rough representation of what that process would look like an a T-v diagram: (it would probably vaporize quickly, but I omitted that to make it simpler)

Similarly to the v-T diagram of the original question, there is more than one state ($v$) that can be represented by the same entropy ($s$) and temperature ($T$).

Therefore, temperature and entropy are not independent properties in regions including both the "normal" and the "abnormal" behavior of water.

1
Work done by an expanding gas
2
Pressure Volume graphs and work done
0
Connecting two vessels of equal volume, one with an ideal gas and other having vacuum
3
For same temperature, mass and composition the pressure and volume are independent coordinates?
0
Why are temperature and specific volume independent properties?
0
Reversible vs. Irreversible Expansion
0
If at a given value of reduced volume and temperature, all gasses have the same reduced pressure, shouldn't have value be constant throughout?
0
In an irreversible or reversible isobaric process, is $Q$ equal to $dH$? is $dH$ equal to $W$?