At what speed does our universe expand?

Conceivably it expands with the speed of light. I do not know, but curious, if there is an answer. At what velocity, does our universe expand?

The rate of expansion of the universe (the fact that all objects are receding from each other and more so if they're farther away from each other) is given by the Hubble constant $H_0= 69.32 ± 0.80 (km/s)/Mpc$ 1

Check out this plot from Wikipedia 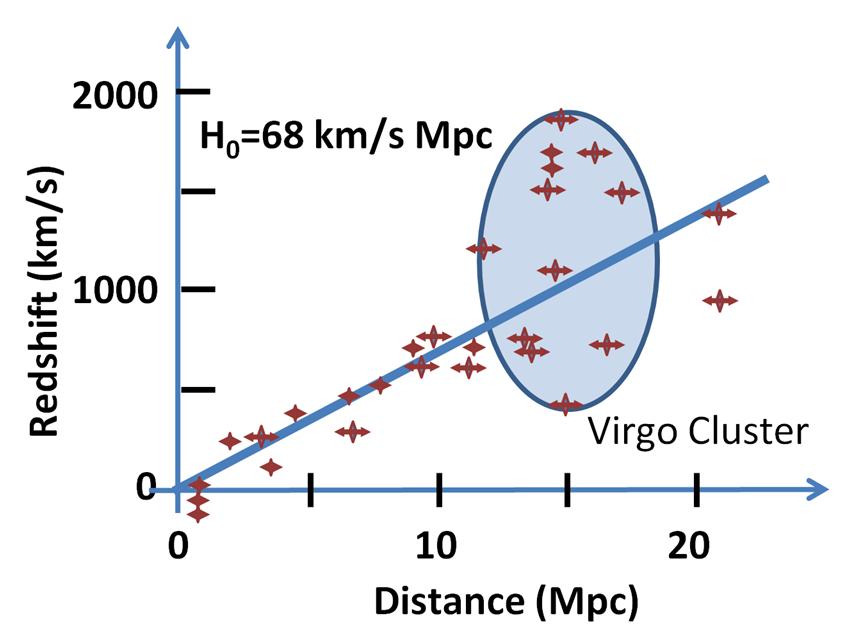 On the y axis you have the velocity with which the object is receding from us and on the x axis the current distance in a common astrophysical unit called Megaparsec (parallax of one arc-second $1\text{pc} \approx 3.26$ light yrs).

the discrepancy circled in blue is due to the galaxies having additional internal motions on top of their receding due to expansion. The galaxies measured there are (as the label says) part of the virgo cluster. The internal motion will induce a Doppler shift that will influence the overall redshift of the galaxy

The recessional velocity is given by Hubble's Law and it's proportional to the proper distance from the observer to the object (galaxy or other distant object):

As you can see, the recessional velocity beyond a certain distance, known as the Hubble distance, can be much greater than the speed of light (in vacuum). This does not violate the relativity because the recession is not a movement through the space, it's the expansion of the space itself, between the objects.

Perhaps it should be pointed out here that there is no such thing as "the expansion speed of the universe". The universe does not expand at a single speed. Instead the observed expansion speed depends on the distance, as given by the Hubble constant. That constant is 72 km/sec per Mpc (1 pc is 3.25 lightyears).

What Hubble tells us is that "the expansion speed rises 72 km/sec for every 3.25 million lightyear separation". Two galaxies that are separated by a distance X, measured in megaparsecs, will move apart at a speed of 72X km/sec. For example, if we look at a galaxy that's 100 Mpc (325 Mly) away, we will see it moving away from us at a speed of 7200 km/sec.

At what speed does our universe expand?

This question doesn't make sense in the form in which it was posed. To see why, let's start by thinking about how we know the universe is expanding.

The expansion of the universe was originally discovered by Lemaître and Hubble, who found that the redshifts of galaxies were proportional to their distances from us. To keep things simple, let's start by thinking about how this would be interpreted if we didn't know about relativity, so that velocity and distance can be defined as we expect in Newtonian mechanics. A redshift of, say, 0.037% indicates that a galaxy is moving away from us at almost exactly 0.037% of the speed of light. Hubble's observation therefore implies v=Hd, where v is the relative velocity of two galaxies, H is a number that is the same for all galaxies, and d is the distance between the two galaxies. All intergalactic distances are increasing by the same scaling factor in any given interval of time. This is exactly what happens, for example, when a piece of metal expands because it has been heated. When a piece of metal expands, we can't describe its overall expansion using a velocity in units of meters per second. A velocity can only be defined if we first specify which two atoms in the metal we're talking about. The velocity will be different if we pick a different pair of atoms. For similar reasons, it doesn't make sense to ask for "the" velocity of expansion of the universe. There is not one velocity but many.

Now suppose we fix our attention on two specific galaxies. Can they be receding from one another at a speed greater than c? This question requires relativity. General relativity does not have a uniquely defined way of talking about the velocity of galaxy A relative to galaxy B if they are at cosmological distances from one another. If we like, we can verbally describe the situation by saying that both galaxies are at rest, but the space between them is expanding. If we like, we can use certain measures of distance and time (see https://www.physicsforums.com/threads/how-are-time-and-distance-measured-in-cosmology.506990/ ) and verbally describe A and B as moving relative to one another at a rate found by taking the change in distance divided by the change in time. In fact, general relativity allows us to assign absolutely any value we like to A's velocity relative to B; it simply isn't a well-defined thing.

Conceivably it expands with the speed of light.

You may sometimes see statements that cosmological inflation caused the universe to expand faster than c, or that the edge of the observable universe occurs at the place where the Hubble law gives a velocity equal to c. The first statement is incorrect because the expansion of the universe can't be measured with a single velocity. The second statement is at best an oversimplification because relative velocities of distant objects are not well defined in general relativity. For one fairly natural definition of velocity, there are galaxies we observe that are now and always have been receding from us at a velocity greater than c.[Lineweaver]

[This is a copy of a FAQ entry at physicsforums.com, which I wrote with suggestions and comments from other physicsforums members.]

Not the answer you're looking for? Browse other questions tagged cosmology speed-of-light universe space-expansion or ask your own question.