I'm an undergraduate student in Chemistry currently studying quantum mechanics and I have a problem with unitary transformations. Here in my book, it is stated that

Provided that I have no knowledge of Lie Group/Algebra, my questions are:

There's no escaping Lie theory if you want to understand what is going on mathematically. I'll try to provide some intuitive pictures for what is going on in the footnotes, though I'm not sure if it will be what you are looking for.

On any (finite-dimensional, for simplicity) vector space, the group of unitary operators is the Lie group $\mathrm{U}(N)$, which is connected. Lie groups are manifolds, i.e. things that locally look like $\mathbb{R}^N$, and as such possess tangent spaces at every point spanned by the derivatives of their coordinates — or, equivalently, by all possible directions of paths at that point. These directions form, at $g \in \mathrm{U}(N)$, the $N$-dimensional vector space $T_g \mathrm{U}(N)$.1

So, the above (and the notes) answers to your first three questions: We can always represent a unitary operator like that since $\mathrm{U}(N)$ is compact and connected, the exponential of an operator means "walking in the direction specified by that operator", and while $\mathcal{U}$ lies in the Lie group, $\mathcal{T}$ lies, as its generator, in the Lie algebra. One also says that $\mathcal{T}$ is the infinitesimal generator of $\mathcal{U}$, since, in $\mathrm{e}^{\alpha \mathcal{T}}$, we can see it as giving only the direction of the operation, while $\alpha$ tells us how far from the identity the generated exponetial will lie.

The physical meaning is a difficult thing to tell generally - often, it will be that the $\mathcal{T}$ is a generator of a symmetry, and the unitary operator $\mathcal{U}$ is the finite version of that symmetry, for example, the Hamiltonian $H$ generates the time translation $U$, the angular momenta $L_i$ generate the rotations $\mathrm{SO}(3)$, and so on, and so forth — the generator is always the infinitesimal version of the exponentiated operator in the sense that

so the generated operator will, for small $\epsilon$ be displaced from the identity by almost exactly $\epsilon T$.

2 Think of the two-dimensional sphere (which is, sadly, not a Lie group, but illustrative for the exponential map). Take the tangent space at one point and imagine you are actually holding a sheet of paper next to a sphere. Now "crumble" the paper around the sphere. You will end up covering the whole sphere, and if the paper is large enough (it would have to be infinte to represent the tangent space), you can even wind it around the sphere multiple times, thus showing that the exponential map cannot be injective, but is easily seen to be surjective. A more precise notion of this crumbling would be to fix some measure of length on the sphere and map every vector in the algebra to a point on the sphere by walking into the direction indicated by the vector exactly as far as its length tells you.

3 This is quite easy to understand - if there were some part of the group wholly disconnected to our group, or if our group had infinite volume (if it was non-compact), we could not hope to cover it wholly with only one sheet of paper, no matter how large.

Well, quantum mechanics is famous for not being intuitive for earthlings like us, but the following couple of facts might help:

Here's a supplement to ACuriousMind's excellent answer, which:

Sorry it's so long! If you don't feel like reading the whole thing, you might want to skip to the last section, which doesn't depend too much on the earlier ones.

As ACuriousMind said, the Lie algebra of a Lie group can be defined as the tangent space at the identity—the space of possible velocities of paths through the identity. If you think about $U(1)$ as the unit circle in $\mathbb{C}$, you can see this tangent space very explicitly: it's the line tangent to the unit circle at $1$, which can be naturally identified with the "imaginary line" $i\mathbb{R}$. 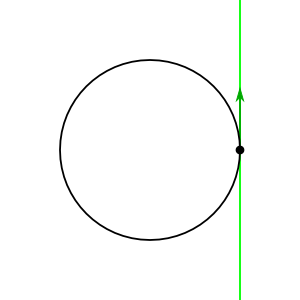 Now, here's a cool fact about Lie groups: if you pick a velocity at the identity element, it naturally extends to a velocity field defined everywhere in the group! Here's how.

If you're walking along a Lie group $G$, and you find yourself getting lonely, you can imagine you have a twin walking a path which is just like yours, but "translated" by an element $g$ of $G$: when you're at $h$, your twin is at $gh$. Whenever you walk through the identity, your twin walks through $g$, so your velocity at the identity corresponds to a twin velocity at $g$. The connection between your motion and your twin's motion gives a correspondence between the tangent spaces $T_{\mathbf{1}}G$ and $T_gG$.

A velocity field that comes from a bunch of people walking in lockstep like this is called a left-invariant vector field. Using this vocabulary, we can restate the cool fact from before by saying that...

In a Lie group, picking a velocity at the identity is the same as picking a left-invariant vector field.

For a concrete example, let's see how a velocity at the identity of $U(1)$ extends to a velocity field defined everywhere on $U(1)$: 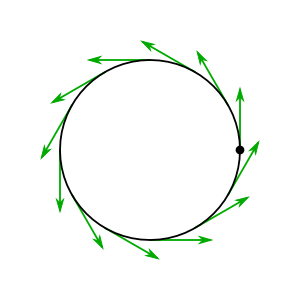 Now, let's say you have an element $v$ of the Lie algebra $\mathfrak{u}(1)$, which we just saw is the same as having a left-invariant vector field on $U(1)$. If you're standing at the identity in $U(1)$, and you're bored, you can entertain yourself by trying to walk so that your velocity always matches the velocity field $v$. It turns out there's always exactly one way to do this, so if you do it for time $t$, you'll always end up at the same place. This group element is called $\exp_t v$. You can think of $\exp_t$ as a function that turns Lie algebra elements into Lie group elements; it's called the Lie group exponential. Writing an element $a$ of $U(1)$ in exponential form means finding a left-invariant vector field $v \in \mathfrak{u}(1)$ that will take you to $a$ in one unit of time, so $a = \exp_1 v$.

If you think about $U(1)$ as the unit circle in $\mathbb{C}$, there's a very concrete way to compute $\exp_t v$. We saw earlier that $\mathfrak{u}(1)$ can be naturally identified with $i\mathbb{R}$, so we can think of $v$ as an imaginary number. You can turn this number into a velocity field defined over the whole complex plane by telling people at $z \in \mathbb{C}$ to move with velocity $vz$: 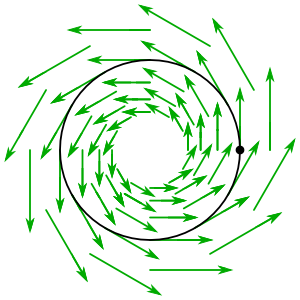 If you're a fancy-pants scientist, "telling people at $z$ to move with velocity $vz$" sounds too undignified, so instead you write this sentence as the differential equation

In this equation, $v$ is a constant imaginary number, and $z$ is a time-dependent complex number. If you know a little calculus, you can verify that $z(t) = e^{vt}$ satisfies the equation, with $z(0) = 1$. Hence, if you start at the identity of $U(1)$ and follow the velocity field $v$ for time $t$, you'll end up at $e^{vt}$. That means $$\exp_t v = e^{vt}.$$ We've discovered that, if you look at things in the right way, the Lie group exponential for $U(1)$ matches the familiar exponential of complex numbers!

As your textbook says, every unitary operator has an exponential form: in other words, any element $g$ of the Lie group $U(n)$ can be written as $\exp_1 v$ for some left-invariant vector field $v \in \mathfrak{u}(n)$. What's the physical meaning of this?

In quantum mechanics, unitary operators represent symmetries, so one physical consequence of the fact above is that...

In quantum mechanics, any symmetry can be made continuous.

Here's an example of this fact in action. One of the most common kinds of symmetry in physics—so common that we often don't even think of it as a symmetry—is time evolution. Let's say you have a physical system that evolves in discrete time steps. The symmetry that moves you one step forward in time will be represented by a unitary operator $U$. If you write $U$ in exponential form as $\exp_1 v$, you can make the time evolution continuous by declaring that $\exp_t v$ moves you forward $t$ units of time, for any real number $t$.

While i was typing, two good answers were posted. Since I don't want to delete everything, I'll leave this here nontheless.

Without appealing to Lie theory, one might argue by physical reasoning.

The unitary operators your book has in mind depend on a continous parameter $\alpha$. They describe continous transformations of the quantum mechanical state $\psi$ under consideration, e.g a translation in space, rotations, time evolution,..., to name the most prominent. One might reasonably expects, that

This is relatively hand-waving and for a complete understanding there is no avoiding Lie-Theory. See the answer by @ACuriousMind, though you might find it a bit heavy if you lack the mathematical training(?).

Not the answer you're looking for? Browse other questions tagged quantum-mechanics mathematical-physics operators hilbert-space mathematics or ask your own question.

14
If all the eigenvalues of an operator are real, is the operator Hermitian?
4
What happens when we have $e^{H}$ with $H$ an operator?
2
Generators of $SU(2)$ and $SU(3)$ Symmetry Groups