Magnet spinning between two other magnets

Suppose, we have two magnets, MA, MB, and we have a third magnet MC in between the two magnets. 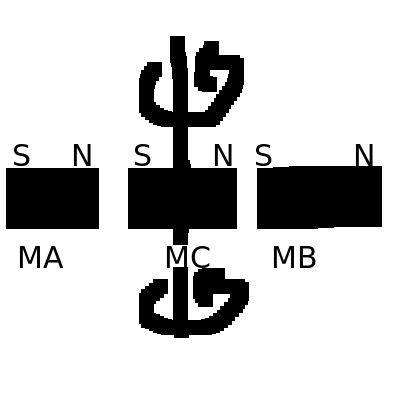 The middle magnet is spinning, so it attracts and repulses the other two magnets once per rotation.

It is spinning "super fast" - that is so fast that the attraction and repulsion phases are super short. The other magnets are just too heavy to even start moving visibly in one or the other direction, before the direction of the force changes again.

We could say "nothing happens" - except the outer magnets oscilate slightly with each rotation.

If the middle magnet would spin "super slow", the others would just jump to the middle one, stick to it, and rotate with it as if it's all one magnet.

What happens if the middle magnet would spin with a frequency in betwen?
That's difficult, because much depends on how the rotation starts, and we only know it has started...

If the rotation starts slowly and gets faster then, up the middle speed, different things can happen during the first rotation. The magnets could stick to the rotating one, or move away a little bit; That whould have a big influence on what happens later.

Not the answer you're looking for? Browse other questions tagged electromagnetism experimental-physics magnetic-fields or ask your own question.

13
Magnets arranged in a sphere
16
Can the magnetic lines of force of two or more magnets intersect each other?
1
Is the force on a magnet between two magnets of same size and strength additive?
1
Electrons as tiny magnets
5
Why do bar magnets exert a force on each other?
48
How are magnets held together, and why do they not explode?