Does the entropy of a system vary in the equilibrium?

I am not physicist and this question may seem trivial. But I understand that in the equilibrium the magnitudes such as temperature or volumen do not vary. Is the same for entropy? My logical says that it should not, and here is why:

Am I wrong here or the reasoning is good?

Equilibrium is defined in the original notions of thermodynamics as the asymptotic static state. I.e., by this definition no macroscopical quantity varies in equilibrium.

Statistical physics however tells us that the system varies in a certain "random walk" around all the possible states and never stops. We just cannot distinguish most of these states macroscopically. But once the system enters the microstate which is one of the overwhelmingly dominant set of microstates which we observe as "equilibrium", it is very likely it will choose another of the "equilibrium" microstates in it's next random step. So we observe it to stay there and to be in equilibrium without change.

But does entropy change? Entropy is strictly a property of the macrostate, i.e. the rough observed state - it is just a measure of microstates giving the same macrostate. There is a single macrostate called "equilibrium". So entropy in a fixed macrostate cannot vary by definition. In this sense the answer is a very strict no.

But as mentioned in the second paragraph, the system never stops it's random walk. So the system actually does fluctuate around equilibrium even macroscopically. Since it does reach a different macrostate, it will necessarilly vary in entropy. Why? Because the equilibrium is a local maximum in entropy in the macrostate space, so any adjoint macrostate will strictly have a different entropy. Hence, we can even say what the direction of the variations will be - the entropy will always shortly fluctuate into values slightly smaller than in equilibrium.

EDIT: In this discussion, I assume that we are able to observe distinct fluctuations in the macroscopic parameters such as internal energy and volume, and entropy is then defined using the phase space volume $\Omega_c$ (number of microstates) constrained by the immediate values of the macroscopic parameters: $$S = k_B \log \Omega_c$$ But we do not observe internal energy directly, so we can think about an isolated system with a fixed volume $V$, start out of equilibrium and observe fluctuations in pressure. There we would observe exactly the mentioned effects.

To give an example of what I mean, let us consider an ideal gas in a box with fixed energy $E$, number of particles $N$ and volume $V$.

What equilibrium statistical mechanics tells us is that the probability distribution of the micro states of the ideal gas in that box does not vary with time. Incidentally, one can also associate a non-varying entropy to that probability distribution which is the total entropy of the system. It basically tells you how much you know nothing about the exact state of the gas once it has equilibrated.

Now, because you know nothing about the gas besides that it has fixed $(E,N,V)$ does not mean you cannot ask any question about its macroscopic behaviour at equilibrium. For instance, most people imagine that when a gas is at equilibrium then it fills uniformly whatever container it is trapped in. But because all micro states are equally likely, that is not necessarily so. 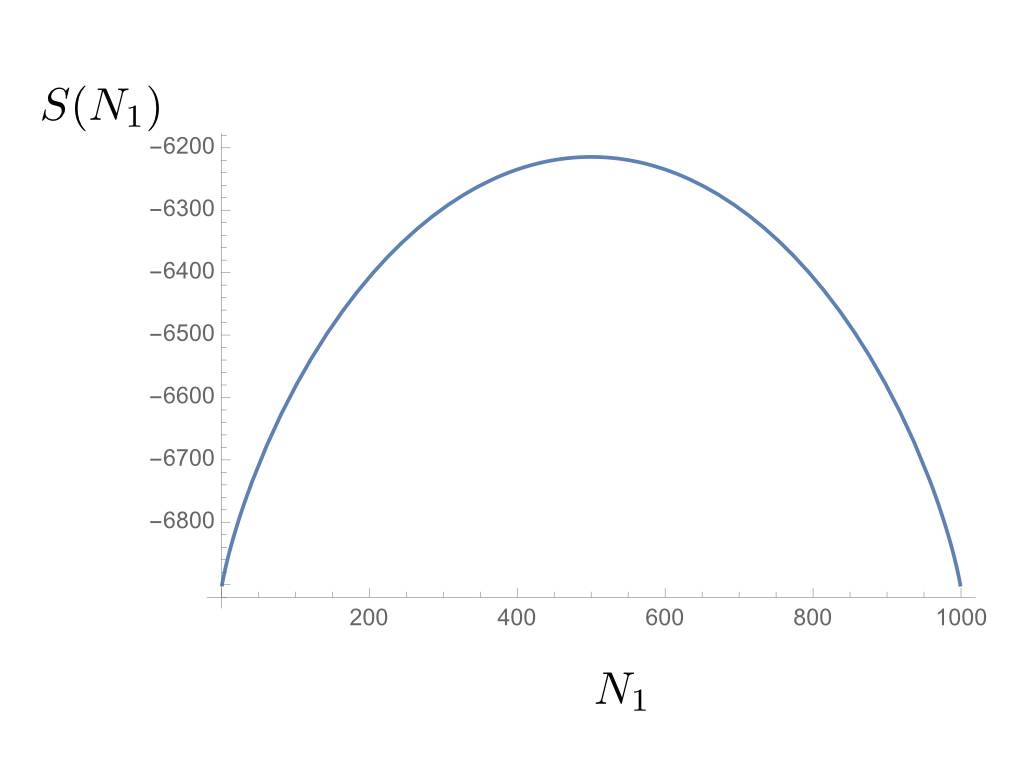 It is easy to see that this graph has a maximum at $N_1 = N_2 = N/2$. So what we find is that, in a gas at equilibrium, having the same number of particles in both halves of the containing box is the macroscopic configuration with the highest configurational entropy. However, all the other configurations with $N_1 \neq N/2$ are also possible it is just that their odds for happening goes as $e^{S(N_1)-S(N)}$ and this function is very strongly peaked at $N_1 = N/2$.

Overall, for any macroscopic configuration other than that of the imposed constraints themselves, the entropy can always vary at equilibrium and will do so by fluctuating about the most probable value.

1
Statistical interpretation of Entropy
11
What precisely does the 2nd law of thermo state, considering that entropy depends on how we define macrostate?
5
What is the cause for the inclusion of 'thermal equilibrium' in the statement of Ergodic hypothesis?
20
Do the results of statistical mechanics depend upon the choice of macrostates?
0
If all microstates are equally probable, why does entropy tend to increase?
2
Increase of entropy as statistical necessity via fundamental assumption of statistical mechanics
1
In the entropy formula, how do we know which one is a valid microstate for a particular macrostate?