Approaching speed of light: why do objects appear further away in front of me?

A Slower Speed of Light is a video game created by the MIT Game Lab which allows users to experience what it would be like if the speed of light was closer to normal walking/running speeds and thus experience relativistic effects in an otherwise familiar environment. From the site:

A Slower Speed of Light is a first-person game prototype in which players navigate a 3D space while picking up orbs that reduce the speed of light ... [allowing] the speed of light in the game to approach the player’s own maximum walking speed. Visual effects of special relativity gradually become apparent to the player [as more orbs are collected]... These effects, rendered in realtime to vertex accuracy, include the Doppler effect (red- and blue-shifting of visible light, and the shifting of infrared and ultraviolet light into the visible spectrum); the searchlight effect (increased brightness in the direction of travel); time dilation (differences in the perceived passage of time from the player and the outside world); Lorentz transformation (warping of space at near-light speeds); and the runtime effect (the ability to see objects as they were in the past, due to the travel time of light).

When I play the game and collect enough orbs for relativistic effects to really start becoming significant something happens that I didn't expect: as I accelerated towards objects they appeared to move further away from me (despite length contraction definitely being taken into effect, since I was able to get to those objects faster over a given distance than had I not collected any orbs). Luboš Motl in this question says that this is due to:

There is a difference between what "happens", described by the Lorentz Transformations, and what you see with incoming light beams, which is heavily influenced by differing light delay times from parts of the scene.

There is a very good explanation in the second half of this essay: http://mathpages.com/rr/s2-05/2-05.htm, search for the phrase "Meanwhile, Einstein's 1905 paper on the electrodynamics of moving bodies included a greatly simplified derivation of the full Lorentz transformation"

As to your last point, it is explained in the link but basically if you define an angle of incidence of light in the stationary frame as tan(a) = x/y, and then in the moving frame define tan (a') = x'/y', then as you said in the question y' = y so if x' is different to x then a' must be different to a. There is your angle change, hope this makes sense!

Just to address the other part of your question, the apparent stretching of space in front of you at high speed is due to the Doppler effect, so if you looked behind you you would see space compressed. 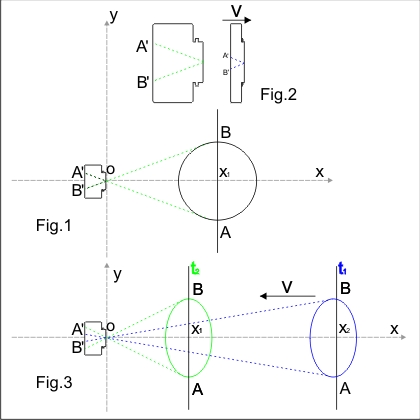 It seems that it should look like that (at first glance), maybe someone can say something in addition or to find something that I have missed:

The picture should not depend on chosen frame.

If the camera moves towards illuminated sphere there are the following effects: contraction of the camera and motion of the film towards object, while light travels inside the camera.

So, we can compare pictures of "stationary camera" wrt sphere (Fig. 1) and "moving camera" wrt sphere (Fig.2) when they coincide, I mean their pinholes coincide. At this moment, when the shutter briefly opens, the same information goes through the aperture. Patches of light rays from edges of the sphere to aperture and from aperture to the film form similar triangles. Since camera Lorentz - contracts and the film moves forward, image should appear smaller on the film that corresponding image as taken by "stationary" camera wrt sphere at this point.

If we work in the camera frame, if the sphere moves towards camera (Fig. 3), it seems that there is light - time correction, and we see the sphere "in the past", blue rays, since "green" rays from its current position have not reached the camera yet.

1
If an observer were to move toward the moon at a significant fraction of the speed of light, will its cross section appear a different size?
21
How realistic is the game “A slower speed of light”?