How can metal objects become electrically charged, if current flow means that an equal number of electrons enter/leave the object?

I am trying to answer to the question in the title. I am restricting my question to metal objects only.

Here is my logical reasoning:

Of course, objects CAN become electrically charged, gaining or losing electrons. So something is wrong with my reasoning or my premises. I just don't know what it is. Where am I going wrong?

If you have a complete circuit, every piece of metal will gain and lose the same number of electrons and will not have a net charge. If you connect two plates, one to each end of a battery, the battery will take charges from the plate connected to the positive terminal and send charges to the plate connected to the negative terminal until the voltage between the plates equals the voltage of the battery. At this point, no more current will flow, but each plate will have been given a net charge.

What you have described is the reason that conductors (such as metals) will act to reduce any polarisation within their structure. Polarisation is an imbalance of charge. In an object with a neutral charge overall, one region of the object may have a surplus of electrons, and thus have a net negative charge, and therefore another region will have a deficit of electrons, and thus have a net positive charge.

Now, what you say about metals is true, they conduct electricity and therefore current will flow in order to neutralise any imbalance in charge. However, this does not prevent them losing electrons by friction. The standard classroom experiment where you rub a balloon against your shirt in order to pull electrons from one to the other will still work with metals. Copper, for example, is often used as a conductor in wire form, but a copper rod may also be rubbed against another object to transfer electrons. This is called the Triboelectric Effect.

Also, although conductors when left on their own will act to spread charge out across their structure through current flow, it is still possible to polarise them (i.e. create imbalances of charge) using an external means. One such method is called Electrostatic Induction. In the picture below, moving a positively charged object near to the conductor in the electroscope pulls the electrons toward the top end, and as a result causes a local net negative charge here, and a local net positive charge at the bottom. 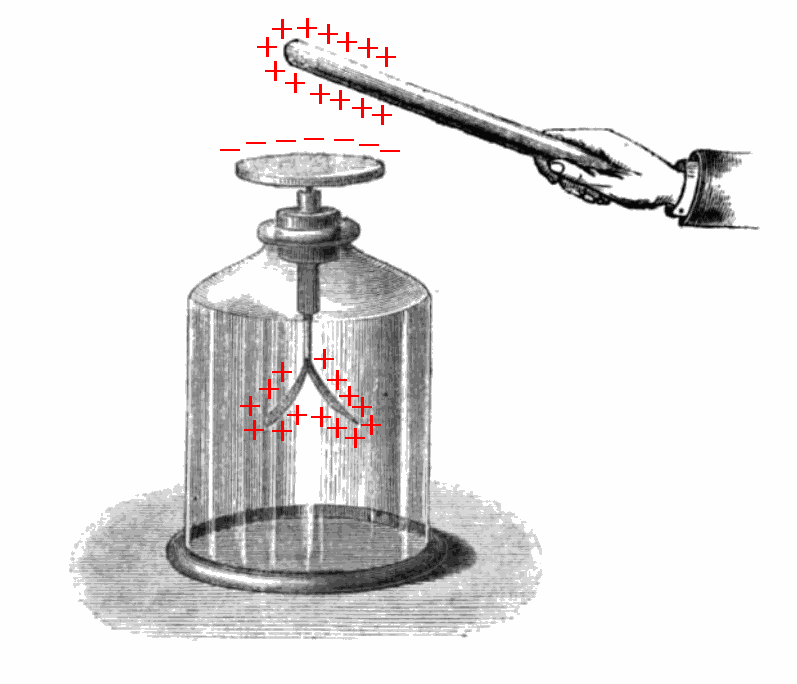 There's a problem in that you are assuming that all current takes place in a circuit. But in some circumstances, like in a lightning strike or other form of electrostatic discharge for example, a current exists for a while, but it does not take place in a circuit.

1
Does charge of a metal charged by induction determine by which ends of the metal is grounded to?
2
How can "...electrons flow in metals, but not in the ground..." explain grounding rods?
1
tranfser of electrons between two metals and a wire
0
What does the movement of charge in an object mean?
0
How does a capacitor discharge work?
0
Need help understanding electrostatic induction in regards to the 'Thompson (Kelvin) Water Dropper'
3
Basic question about electric shock
0
Positive charge in electrostatics