This is the setup of my Foucault pendulum: 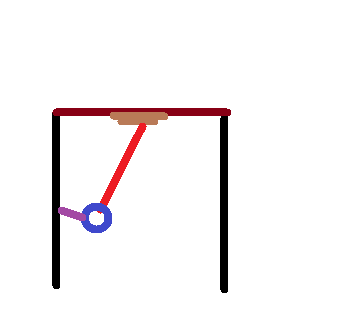 Assume we have a Foucault pendulum suspended in the north pole. the pivot is just above the the axis of rotation (allowing the pendulum's plane to be in any direction relative to the apparatus). Before it starts swinging, the pendulum is attached to one of the supporting bars (the black lines) by a small string. To begin the motion of the pendulum you burn that string (this is the mechanism Foucault used).

While the pendulum is connected to the supporting bars it is moving with the apparatus, thus possessing both a velocity and an acceleration, the moment it is released, it has an initial velocity in the direction of rotation. what happens to this velocity?? All explanations and illustrations I see, assume from the beginning that the plane of the pendulum in the north pole is fixed relative to the "fixed stars" (I am aware of the philosophical debates), somehow neglecting that initial velocity.

I guess that I lack the understanding of the pivot mechanism itself, so if any one can shed light on my question and on the mechanism of the pivot, I would be very Thankful!

I think I'm not so clear about my question and explanation of the situation. I found an incredible wiki article: Foucault pendulum Under this section: Relative motion of the plane of the pendulum swing to the surface of the earth, at the north pole:

The initial angular momentum is clearly mentioned here, and it should be cancelled, how did Foucault cancel it?

Suppose the Earth wasn't rotating, but instead you impart a small sideways velocity to the pendulum bob as you release it. What you would have is a conical pendulum that traces out an ellipse instead of a straight line.

Now start the Earth rotating. The point of the Foucault's pendulum is that the rotation of the Earth doesn't affect the motion of the pendulum, so the pendulum behaves exactly as it did in the thought experiment we started with. The bob traces out a (very narrow) ellipse, and the axes of the ellipse rotate relative to the Earth.

Nothing happens to the initial angular momentum. It is simply irrelevant.

Let's imagine that the pendulum is placed on a non-rotating body (or at the earth's equator). When the string is cut, the pendulum falls straight to the center. The path it traces is a straight line.

In the non-equatorial case, the pendulum structure has some rotation. At the time of release, there is some tangential speed. This causes the path that that the pendulum traces to be an ellipse instead of a line. The pendulum does not go through the center.

But even if there is a small ellipse, it is minimal and does not change the experiment. You can still easily determine the long axis of this ellipse and observe how the axis changes over time. So the initial velocity changes the shape of the path, but cannot cause the path to change later (which is what is being observed).

You do have to define the velocity with respect to something. The idea (I think) behind defining wrt fixed stars is that the Earth is in motion wrt the stars, too. Barring friction, the moment the rope is burned, the pendulum is only under the influence of gravity and the restraining force of the suspension rope -- analogous to swinging a weight around yourself and letting go of the string. The pendulum mass (undoubtedly held up with a massless, inextensible string connected to a frictionless u-joint :-) ) will follow the standard Newtonian force laws, so just add its initial velocity vector to whatever gravity causes.

Not the answer you're looking for? Browse other questions tagged newtonian-mechanics forces reference-frames or ask your own question.